China has a thing for glass bridges and walkways – and this epic ledge walk in mountainous Guangxi province is a vertigo-inducing classic of the genre.

The Dan Lu Walkway rises from its namesake village and clings to the sheer rock face, heading through rocky arches and past stubborn, shrubby vegetation. 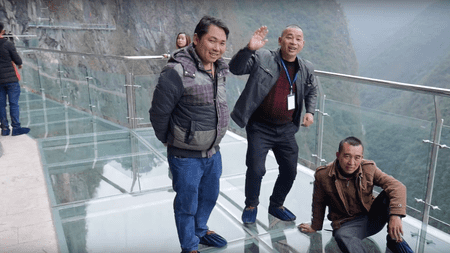 Visitors pose on the glass floor of the walkway | © Culture Trip

Jagged, misty peaks rise in the distance, and tiny paths and roads snake through the forests below. You might get some reassurance from the rugged cliff on one side and the solid rail on the other, but beneath your feet – and clearly visible through the glass panels – an abyss stretches down to the valley floor.

The walkway climbs Danshan Mountain, stretching for 280m (919ft).The clear glass panels are supported by concrete bars that emerge from the cliff, with a concrete shoulder hugging the cliff edge – more nervous walkers can walk here to keep at least some of the vertigo at bay.

Dan Lu is in the north of Guangxi, 300km (186mi) north of the provincial capital, Nanning. The village’s other claim to fame is shendan, a medicine collected here that promised eternal life. It was supplied to local rulers and emperors, and is celebrated in town by a gigantic model of an edible gourd. Visitors keen to explore Dan Lu’s history can tramp up to the partially restored remains of the local palace.

Sinkholes and caves in Guangxi

This southern Chinese province has long been regarded as wild border country, home to karst peaks and wide rivers, with the sea to the south and Vietnam to the west. Many of its best places to visit are a part of this rugged landscape. West of Dan Lu is Leye county, home to Dashiwei Scenic Area, a park featuring dramatic sinkholes, caves and underground rivers with – wouldn’t you know it – a glass viewing platform for you to survey the karst features and the mountains around. At nearby Chuandong Sinkhole, you can hike past strange vegetation right to the bottom of an atmospheric natural cavern.

To the east, Guilin is a big, buzzing city that’s a decent base for visiting the province’s other attractions, including rivers and peaks, while smaller Yangshuo mixes tourist sites with stunning views, offering easy access to the peaceful surrounding countryside.

North of Guilin, Bajiaozhai is a national park with distinctive snail-shaped rock formations and walks through cliffs and bamboo forests. Chengyang Wind and Rain Bridge is a famous covered bridge with pavilions and verandas – a peaceful alternative to the vertigo-prompting glass walkway of Dan Lu. Between the two are Longji Rice Terraces, which climb the hills in impossibly picturesque style, and are dotted with minority villages. Cable cars and hikes offer access to some of the best views in China.

The country’s enthusiasm for glass walkways and bridges has seen over 2,000 of the structures built in recent years, mostly in China’s most scenic corners. Many have proved hugely popular, with famous examples including the Coiling Dragon walkway in Hunan, the Huangtengxia Tianmen Sky Walk in Guangdong and the epic Hongyagu Bridge, which stretches for 488m (1,600ft) between two peaks in Hebei province.

Safety is a major concern – visitors to the Dan Lu walkway are asked to wear foot coverings to protect the glass from scratches, and theatrical tests have seen sledgehammers and even cars used to test the panels’ strength at some sites. But some doubts remain, and there have been accidents. As a result, several bridges have been closed after legislation by local government. If you’re planning to visit a bridge, and gaze out across the mountains and forests of one of the Earth’s most stunning destinations, it’s worth researching to check its status first.