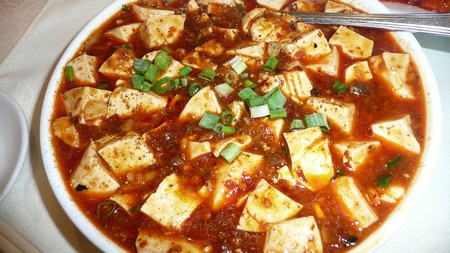 When you think of Chengdu, Sichuan’s capital city, what’s the first thing that comes to mind? It’s almost certainly hotpot or the Giant Panda – the twin ambassadors of the city. But there’s so much more on offer, we take a look at the culinary delights of Sichuan cuisine.

China’s known throughout the world for its food, with each region contributing its own flavors, but there’s something special about Sichuan food. First of all, there is no better place to sample it than in the Hibiscus City (a nickname for the Sichuanese capital city Chengdu which dates back to the 10th century). In this city of 14 million you’ll have everything at your fingertips, from banquet feasts to alley snacks. The bold flavors of Chengdu’s food fare earned it the first UNESCO “City of Gastronomy” award in 2011.

What defines the flavor of Sichuan?

Spices, two peppers in particular, which create a numbing, fiery sensation: lajiao and huajiao, or Sichuan chili peppers and Sichuan peppercorn. The chili peppers, original imported from outside the country centuries ago, are what you might expect: spicy. However the peppercorn, which looks like small circular pellets, are more unique, producing a tingly-numbing sensation in the mouth. Together these two create that unmistakable Sichuan flavor. 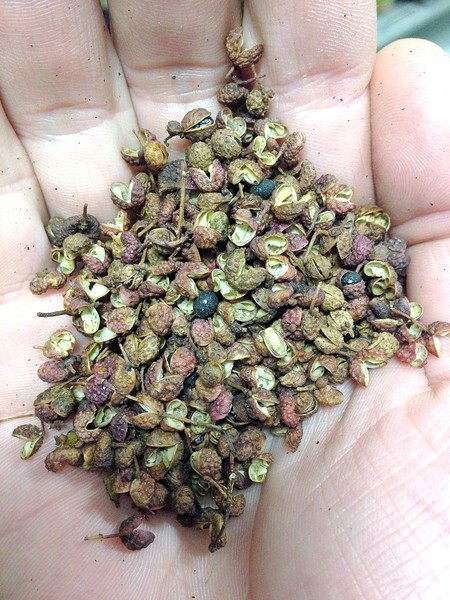 Under the umbrella of Sichuan food is a wide range of options from noodles to home-style dishes and street food like chuan chuan, maocai, and the ever-present shaokao (street barbecue). The most common of these are home-style dishes, which is what’s served at the standard Sichuanese restaurant.

You will see “home style” written directly on the front of many restaurants (家常菜 – “jiā cháng cài”). In these you’ll find the dishes that locals cook at home, including some Sichuan classics like kung pao chicken (宫保鸡丁 – “gōng bǎo jī dīng”), double-cooked pork (回锅肉 – “huí guō ròu”) and Mapo Tofu (麻婆豆腐 – “má pó dòu fǔ”) among dozens of others. Many of these restaurants are “Fly restaurants”, or small hole-in-the-wall eateries which are intentionally spartan. As the locals say, they only care about the quality of the food. If it tastes good then it’s a good restaurant and nothing else matters. If you see cloth napkins, you might be in the wrong place.

There are dozens of choices within these categories alone but the most loved noodles native to Chengdu are without question dandan noodles (担担面 – “dān dān miàn”). This is a spicy broth with regional mustard stems and preserved vegetables, chili oil, Sichuan pepper, minced pork and scallions served over noodles. The popularity of dandan noodles has spread far and wide, not just across China but to Europe and the United States. If you try them in Chengdu however, you may notice that the authentic version is different from what you find overseas: it is spicier, soupier, and is less sweet. 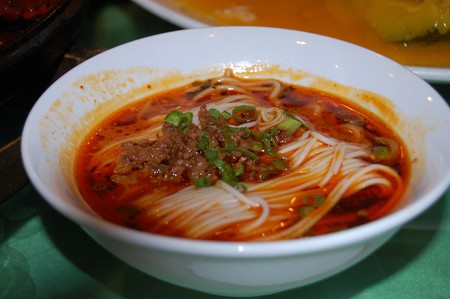 Sichuan is traditionally not known as a region famous for dumplings – that would be the cold, northeastern city in China called Haerbin. But Sichuan does have one claim to fame within the dumpling realm, called Zhong Shui Jiao, or Zhong’s boiled dumplings. These delicate, crescent shaped dumplings are often considered more of a snack than a proper meal, and are most popular at lunch or between lunch and dinner. Filled with minced pork, the sauce is the real star here: chili oil with flakes and “concocted” soy sauce, which has a thicky, syrupy consistency and a sweet, spicy kick. These are a killer snack.

At night after the restaurants close, street food is available all night at carts positioned throughout the city. While noodles and maocai (a street food cousin of hotpot) are widely available, shaokao (barbecue) is the most common. While these grilled chicken, vegetable, beef and pork skewers are available elsewhere in China, the seasoning in Sichuan tends to be bolder than you find elsewhere. When you order, the vendor will ask how spicy you want it: if you’re eating as the locals do, you will say “yào là” (要辣!) which means “Give me the spicy stuff!”

Where to sample Sichuan food

One of the best places in the city to sample a wide variety of Sichuan treats is also a great tourist destination called Jin Li. Brimming with atmosphere, Jin Li is an alley which has existed for hundreds of years and runs directly next to one of the city’s biggest Daoist temples, Wuhou Ci. Over the last decade Jin Li has been renovated more than once to meet the demands of the thousands of tourists who stroll this alley every week. The best time to visit is at dusk on a weeknight. Give yourself at least ninety minutes to stroll around the area – it’s toward the back that you’ll find the snack area. There are are dozens of local specialties available, almost all finger food. Along with the food is some performance flair which contribute to Jin Li’s reputation as one of Chengdu’s most popular tourist destinations.

Outside of Jin Li, the Yulin neighborhood is a Chengdunese favorite for its specialty restaurants with home-style food. It was this neighborhood’s reputation that recently brought Anthony Bourdain here in 2016 to film an episode of his show, Parts Unknown on CNN. The restaurants typical of this area in Chengdu are intimate and humble. In some cases, you might feel like you are eating in someone’s home (and in some cases, you may be). There is a warm casualness to this type of restaurant that you rarely see in the United States or Europe.

One last thing to say about Sichuan cuisine: if spicy food is not your thing, don’t feel bad. Nearly every dish mentioned above has a non-spicy variation, including hotpot. It’s customary for Chengduese to assume that foreign visitors (even those from China) may prefer to not eat the spicy fare that locals devour. If you don’t want to eat spicy food, simply say: “bù yào là, xiè xiè !” (不要辣, 谢谢! ) which means “No spicy food, please!”