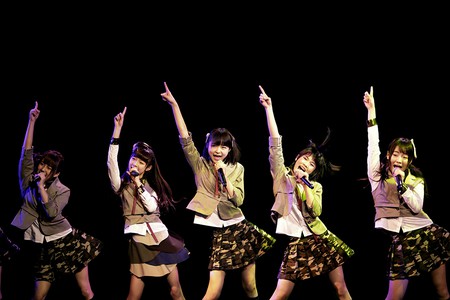 A girl band that has a rotating cast of over 200 members has become China’s hottest investor-funded start-up.

SNH48 managed to raise more than $150 million from investors last month, according to Quartz. The band, who are based in Shanghai, are reportedly run more like a business than a music group.

Inspired by Japanese sister group AKB48, the band is run with teams of interchangeable singers instead of core members.

Fans can vote for their favourite singers and teams while each one has its own unique look and sound. They can even track performers via a mobile app, send them personalised notes and watch their daily live streams.

New teams of performers are carefully chosen by the band’s managers every year while the group are backed by the company Shanghai Siba Media and Culture Group.

‘The S team is older, and they are more upbeat and lively, whereas the H team is more strait-laced,’ Tao Ying, its chief executive, told the Financial Times. ‘The N team has more of a cute vibe, which suits them because they are all on the shorter side.’

SNH48 performs live five nights a week in Shanghai and made $12m from album sales last year. The band does not allow other apps or streaming platforms to sell or play its music.

King said: ‘We want to take things one step at a time in China first but of course we are thinking of entering into different markets.’

Homegrown Chinese acts have long struggled against the onslaught of K-pop but the music trend is losing its hold on the country after China banned all Korean albums and TV dramas last year.

The move was in retaliation for South Korea’s decision to launch a missile defence system without China’s approval.

SNH48’s popularity has risen sharply since then but it still has to compete with Chinese rivals like Acrush, a boy band made up of androgynous women.