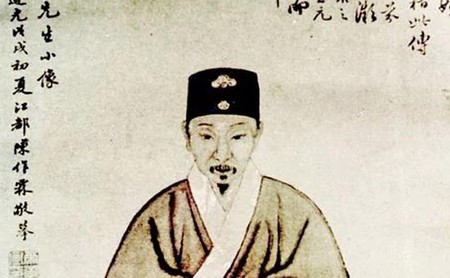 The playwright Tang Xianzu, virtually unknown outside of China, is the country’s most popular dramatist, famous above all for the Four Dreams—four works originally adapted to be performed as traditional Chinese operas (known as kunqu).

If they are their country’s respective greatest playwrights, Shakespeare and Tang Xianzu share more than status: both wrote during the same period, and died in 1616. One can see why excited comparisons between the two have prospered for so long.

Tang Xianzu was born in 1550 in Linchuan, now known as Fuzhou, in the Jiangxi province. He initially joined the civil service after passing China’s famous government examinations: the provincial exam at the age of 21, and the imperial one at 34. Despite leading a successful, if undistinguished, career as a minor official, he retired in 1598 to devote himself to writing. His reputation in China is that of a very straight, honest figure—one strictly against the bureaucratic corruption so typical of the time—and it is said he left government employment because his coworkers didn’t like him for it.

Although he was also a poet, novelist, doctor, astronomer, fortune teller, and geographer (!), Tang is known predominantly for four plays, banded together under the name The Four Dreams of Linchuan. The individual plays are: Zi chai ji (The Purple Hairpin), Nan ke ji (A Dream Under a Southern Bough), Handan Meng (Dream of Handan), and, most famous of all, the Mu Dan Ting (The Peony Pavilion). 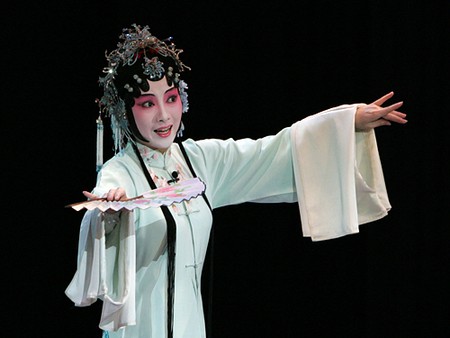 Fengying Shen, in a performance of The Peony Pavilion in Beijing, China (2006). | Bohan_伯韩 Shen_沈 / Wikimedia commons

First performed in 1598, the full text of that last work contains a grand total of 55 scenes, and can run, depending on the production, for more than 20 hours. Most performances however, do without its many subplots to focus on the two main characters: Du Liniang, the daughter of a governor, and Liu Mengmei, a scholar. The former dies after dreaming of meeting a young man in a peony pavilion; the latter meets and falls in love with her in a dream three years later. The rest of the play features resurrection, a disbelieving father, and a merciful emperor (among other things).

There’s no going around it: the Mu Dan Ting is China’s most popular play, to the point of being included in the repertoire of every kunqu theater troupe. It also encapsulates why Tang Xianzu himself has been, since then, so revered: At once a deeply emotional and poetic work—considered the Ming dynasty’s literary high point—it also set its premise in direct opposition with the time’s feudal ethics. ‘True love’ is portrayed as a more worthwhile pursuit than simple observance of strict mores, and calls for freedom and emancipation. This spirit is followed through by the play itself, with Tang’s work flouting the period’s dramatic conventions, mixing—as Shakespeare did—‘low’ comedy with high tragedy.

Tang wrote and participated in his country’s literary Renaissance, when theater texts, rather than being read (as it was Chinese tradition), started to be adapted into popular operas. Although he regarded his works primarily as written plays, the adaptations cemented his fame—a popularity that lives on to this day.