A Far-Too-Brief Overview of 4,000 Years of Chinese Lore

The Chinese mythological tradition is a treasure trove of gems and exciting nuggets that is often explored through film, music, literature, and retellings, from the four great canonical folk tales of the Chinese tradition (The Butterfly Lovers, Lady Meng Jiang, Madam White Snake, and the Magpie Lovers), to smaller, less significant stories used to describe the quirks of the natural world surrounding us. We take a look at the best and brightest in Chinese mythology.

Photograph of painting depicting a scene from the Chinese classic Journey to the West. The painting shows the four heros of the story, left to right: Sun Wukong, Xuanzang, Zhu Wuneng, and Sha Wujing. | © Shizhao/Wikicommons

Naturally, Chinese folklore includes stories of heroes and gods who have become deified through their acts of incredible bravery. The most famous illustration of this is the Monkey God, a formidable warrior who caused extensive havoc in the Jade Palace of Heaven, and performed penance for this through a pilgrimage to India with the monk Xuanzang. Other gods who have became famous due to their playful antics include the unbeatable Nezha, who is known as the ‘Third Lotus Prince’, because his body had to be reconstructed out of lotus petals after he committed suicide as a penance for his misdeeds. His androgyny and the plethora of exciting weapons that he carries with him make him the popular subject of art.

There are even mortals whose glorious deeds have given them divine status. From the military perspective, the best example of this is Guan Yu, a warrior from the Three Kingdoms period renowned for his martial and literary ability. Due to the courage and valour he displayed in the face of death, he has now become a ‘patron saint’ to those wishing for courage and protection from violence in modern China. From the religious perspective, the goddess Guanyin has been very much revered as a symbol of extreme filial piety and religious devotion, an adherence that resulted in the loss of her eyes and her limbs when she was nursing her mother.

Many of these gods reside in the Chinese equivalent of ‘Heaven’, which is called the ‘Jade Palace’ and occupied by the Jade Emperor and his minions. The pantheon of gods thus live out their life and times in a manner that is remarkably similar to the Imperial Court, a fact that was very much picked up upon and mocked in Wu Cheng’en’s Journey to the West, in which the Court of the Jade Emperor became a metaphorical tool through which the author could criticize the inefficiency, idiocy, and laziness of the Imperial Court. 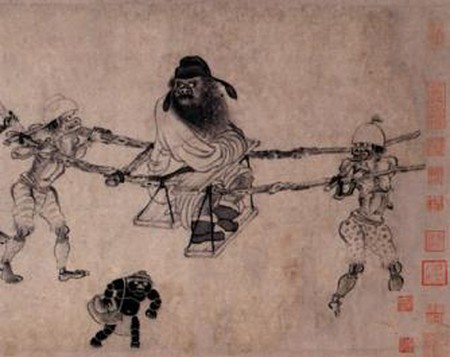 Portion of a scroll entitled Zhong Kui Traveling with his Sister, by Gong Kai, an artist purported to have lived from 1222-1304. Sister is not shown (in a separate panel). | © BD2412/Wikicommons

The Chinese perception of the 18 layers of Hell is both fantastic and gruesome. After being taken down to the Underworld by two custodians of the Underworld (one of which has a bull-head, and the other a horse-head), the soul is then judged by a ‘Death Panel’ very similar to the tribunal faced by the dead in Ancient Greek and Egyptian mythologies. In a manner comparable to that of ‘Dante’s Inferno’, the soul is then taken to a level of Hell that is appropriate for their misdemeanors when alive, be it adultery, or even food-wastage. The fouler levels of Hell that deserve a mention include the third floor of Hell (‘Chamber of Iron Trees’), in which those who cause familial discourse would be pierced by hooks and hung upside down; the seventh floor of Hell (‘Mountain of Knives’) where those who kill others with knives find themselves having to scramble up a hill of knives; and the 17 floor of Hell, (‘Yard of the Stone Mill’), in which those who exploited their powers shall find themselves literally crushed into powder.

Another interesting fact to note is the continuing theme of predestination in Chinese mythology, as it is said that there is a makeshift ledger-book in Hell, which notes down the birth and death dates of every single sentient being in the universe, dates that have been determined from time immemorial, and which cannot be changed. 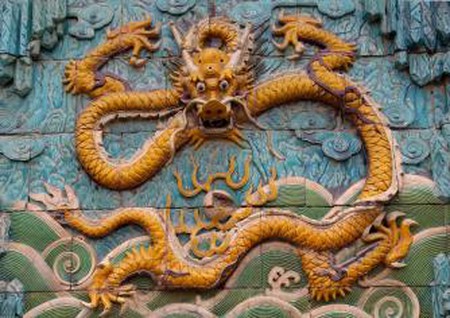 The Chinese mythological canon has a gamut of creatures, both evil and benign, that are said to co-exist with humans in peaceful harmony, and occasionally in not-so-peaceful acrimony. Taking the example of the folklore surrounding dragons, a mythological serpent-like creature associated with royal power, from water dragons that inhabit the ‘four corners of the sea’, to dragons that manipulate the weather, there is a whole mythology and cult surrounding the existence of the dragon in Chinese lore. It is such an integral part of the Chinese culture that the Chinese sometimes refer to themselves as ‘the dragon’s descendants’.

Apart from dragons, though, there is a whole host of exciting and magnificent creatures that inhabit the world of Chinese myth, such as the seductive fox sprites, who ensnare weary itinerants for their flesh; divine snakes who can morph into human form and thus trick the world (the most notable example of this is Madam White Snake, a snake spirit that married a mortal, who lived in blissful ignorance of this until a monk arrived and exposed her as a fraud, imprisoning her under what is now known as Leifeng Pagoda); malevolent demons who use the painted skin of their victims as a disguise for interacting with the outside world; and Chinese vampires—jiang shi—who feed off the life-force of their living counterparts to reanimate themselves, and can only be subdued by peaches, the caws of a roosters and the terror induced from their own reflection! This is a very small sample of the gems that can be found in the Chinese mythological tradition, and the range of stories and interpretations in the poetry, prose, and oral traditions are incredibly broad. 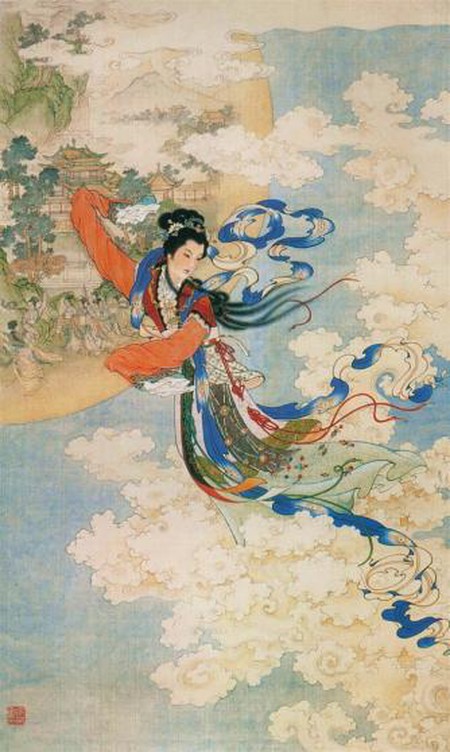 Detail of the stone relief carvings (mid-2nd century) from the Wu Liang Shrine. The Fusang tree stands, Xihe is going to hitch her dragon-horse to the sun chariot, and archer Yi takes aim at the sun-crows. | © Cold Seaon/Wikicommons

Much in the same tradition as Ovid’s ‘Metamorphoses’ and ‘Aesop’, the Chinese tradition uses mythology to describe natural phenomena, such as why the fat of a crab is orange, or why the lunar eclipse occurs. Though there are a plethora of examples that can be used here to illustrate the idiosyncrasies and quirks of this tradition, but here are a few favorites.

‘The Legend of Houyi’ is a mythological figure about whom there has been great dispute; some say that he is the God of Archery, and others claim that he is simply an extraordinary mortal. He is best known for saving Mankind. Essentially, there used to be 10 suns in the sky, who were known as the ‘Sun-Birds’ and would take turns in completing the daily cycle as we know it. However, bored of the routine, they decided to rise simultaneously and continuously, thus causing the entire earth to dry up, and inflicting suffering on the populous. Though the stories widely differ as to the motivations and intentions of Houyi as he confronted the 10 suns, in the end, angered by the willfulness of the suns, he shot down nine suns, and would have killed the final one, had he not been reminded of Earth’s need for at least one sun for crop renewal and growth. Chastened by the death of his nine brothers, the surviving sun then promised to behave as per the previous rules, rising and falling at the right times and without any mischievous intention. This story is used to explain why there is only one sun, and why it is so regular in the 24 hour cycle.

Another story that is often used to provide a contrast to this is the moon story. As a reward for his good work, Houyi was given an immortality pill, a gift he refused to take due to his wife, Chang’e, not being able to join him. The pill was thus kept locked away. When he was away, circumstances resulted in Chang’e having to eat it herself, consequently fleeing permanently to the moon with her rabbit companion. Though interpretations very much differ, with sympathetic narrators proclaiming Chang’e’s innocence, whilst others blame her, this is used to show why there seems to be a rabbit-shaped mark on the moon, a fact that was even noted in a conversation between the Apollo 11 crew and Houston Capcom in 1969, where Michael Collins promised that he would ‘look out for the bunny girl’ when asked to seek her by the Chinese media outlets. 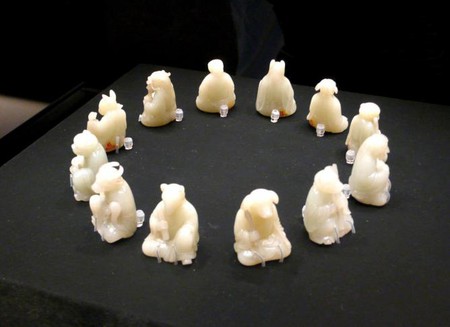 The lore surrounding the Chinese zodiac is one that has drawn a lot of interest from cultures beyond the Oriental sphere, especially as the calendar provides such a contrast to the Gregorian calendar. This calendar is based on the tale of the race of 12 animals. It is said that during the formulation of the year, 12 animals competed so as to determine the ranking and hierarchy of the animals, and they decided that a race across the river would be the best way to determine the winner. Though the ox was considered to be the favorite to win the race, the rat, realizing that he could never win based on his own physical prowess, used cunning to trick the ox, and thus came first instead. This explains why the order of the zodiac is now formalized thus: the rat, ox, tiger, rabbit, dragon, snake, horse, sheep, monkey, rooster, dog, and pig. The animals are used in a similar way to horoscopes, and are said to be indicative of a person’s character; for example, the year of 2014 is the Wood Horse, and therefore those born within this time bracket are reputed to have the personality traits of patience, stubbornness, and unflinching loyalty.