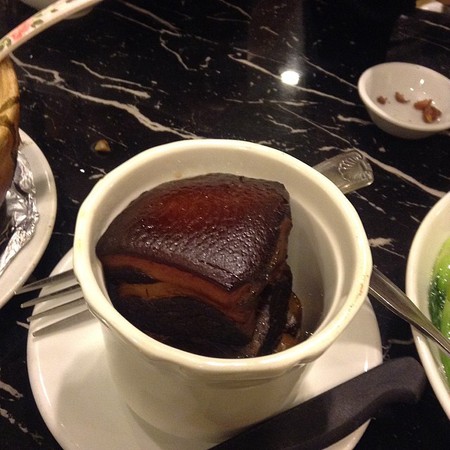 Hangzhou is famous for many things besides the West Lake and its rich cultural heritage, but its most famous resident Su Dongpo is eponymous with a delicious pork dish that far exceeds his lifetime accomplishments. If you experience Hangzhou culture through food, you won’t be surprised to find that every restaurant worth its salt will have Dongpo pork on the menu. Read on to find out more about this epic culinary adventure!

Outspoken in his politics, Su was exiled to a life of poverty in Hangzhou after he had criticized the emperor. His homestead, which was on the east side, inspired his nickname Su Dong Po – Su of the east side.

As the story goes, one day Su had a pot of braised pork simmering on the stove when an old friend visited him and challenged him to a game of Chinese chess. As the challenging game consumed his focus, Su lost track of time and consequently overcooked his pork to the point where it gave off a fragrance as it began to burn, thus creating an important culinary addition. Years later, as he oversaw renovations of the West Lake, Su gave his hard-working workers cubes of braised pork secured with rope to thank them for their hard work, thus introducing it to the working class and the masses and influencing how the dish is traditionally served today. While this may be a tall tale, what remains true is that the dish has since been named after Su Dong Po and is closely associated with him and Hangzhou in history.

Dongpo pork is a Hangzhou dish which is made by pan-frying and then red cooking pork belly. The dish is named after revered Song Dynasty poet, artist and calligrapher Su Dongpo, who is supposed to have invented, or at least inspired it. Each layer of this dongpo pork pyramid is truly a taste of heaven. #hangzhou #hangzhoufood #dongpopork #dongpo #sudongpo #asianfood #belly #foodie #tasteintravel#hangzhoucity#china #yummy#chinaculture#chinahistory#porkrecipe#tasteofheaven#pyramid

The secret to Dongpo pork

The secret to this succulent, aromatic dish is time. Slow cooking for several hours allows the pork belly to absorb the wine and soy sauce breaking down the fatty meat to produce a “melt in your mouth” texture, also reducing the greasiness of the fat and leaving a deep vibrant chocolate brown coating. The meat is so tender one can simply nudge it with a pair of chop sticks and it falls apart; it is often paired with a side of ginger and broccoli to offset the fattiness. Restaurants specializing in this dish require advance booking for cooking time. While it can be found just about anywhere in Hangzhou, Dongpo pork at Hyatt 28 is far superior both in presentation and taste. If you are a culinary tourist, this is one dish you can write poetry about!