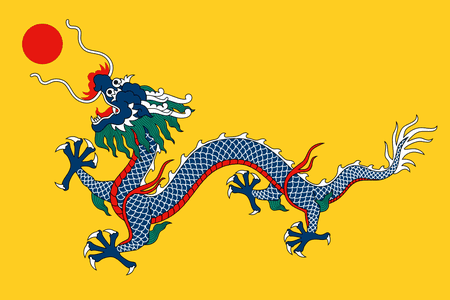 The last imperial dynasty of China, the Qing was a long-lasting and influential regime. The dynasty was established and led by Manchu invaders from China’s north but integrated itself seamlessly into the former Ming systems and customs. Its downfall, however, was one of the most dramatic to date, with the Taiping Rebellion, the Opium Wars, and the Boxer Rebellion all putting major cracks in the dynasty, which finally fell apart in 1911 and gave way to China’s brief republican era. 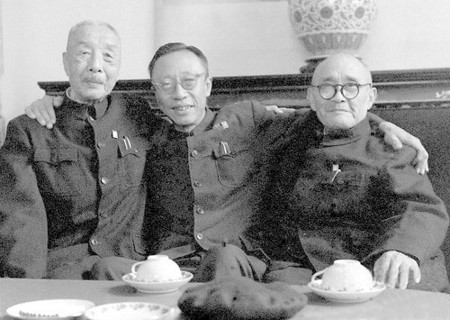 The beginning of the Qing dynasty was a rather ironic one. It succeeded the Ming dynasty, which had spent hundreds of years fortifying the Great Wall and strengthening the navy in hopes of preventing foreign invaders from overthrowing Han Chinese rule, as had happened two dynasties prior. In a moment of weakness, however, the Ming formed an alliance with Manchu tribes to China’s north to squelch rebellion from within and ended up being conquered by the Manchus themselves.

The Manchus then established the Qing dynasty, maintaining the capital at Beijing, which they romanized as Peking, and changing little about the Ming order. While the dynasty ensured that half of all higher-level officials were Manchu, it pacified its constituents by adopting a traditional Confucian approach to leadership and continuing to employ Ming officials.

Throughout its early years, the Qing flourished. The Kangxi Emperor, the longest reigning of any Chinese emperor, ushered in what historians call the High Qing, or the period of peak social, economic, and military power. It was then that the dynasty nearly tripled the size of China, or what it had been under the Ming, and the population exploded to 450 million. Kangxi’s son and the subsequent emperor, Yongzheng, promoted and expanded local irrigation, schools, and roads. The next emperor, Qianlong, then oversaw the ambitious production of the Siku Quanshu, which remains the largest collection of books in Chinese history. Still, these great emperors, who have gone down in history as three of China’s best, couldn’t prevent the disastrous events that would happen next. 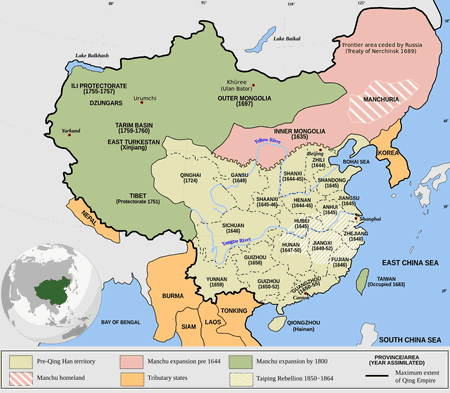 In 1839, 40 years after the Qianlong Emperor’s death, the British incited naval warfare on China over the opium trade, and China’s “Century of Humiliation” began. The First Opium War, as the three and a half years of battles between the Chinese and British were called, spurred the forced opening of China’s ports to international trade. The First Opium War, of course, was followed by the Second Opium War, but not before the Qing endured another major humiliation known as the Taiping Rebellion.

Though preceding dynasties had nearly all suffered rebellions, the Taiping Rebellion was unprecedented in its scale and impact. Believing he was the brother of Jesus Christ, Hong Xiuquan, a failed civil servant, started the rebellion. Seeking a more Christian nation, beginning with the overthrow of the Manchus, Hong gathered sympathetic followers throughout China’s south, and together, this army waged a 14-year-long civil war against the Qing. The Qing won in the end, but not before severely weakening itself and losing an estimated 20–30 million civilians and soldiers.

The cracks in the dynasty were really beginning to show by this point, and the “Century of Humiliation” was just getting started. In 1894, the Qing began another war, this time with the Japanese over influence in Korea, and through it, revealed their inability to fight off modernity. Inspired by this defeat and Japan’s Meiji Restoration, the Qing’s Empress Dowager Cixi attempted similar reforms in China but missed the mark, particularly failing when she decided to support the Boxer Rebellion, which sought to kill foreigners in China.

By this point, the Qing had little hope of turning itself around, and finally, a republican revolution in 1911 forced the abdication of China’s last emperor, the boy Puyi, and imperial China was defeated for good.

The legacy of the Qing is immense. First, what many people consider “ancient Chinese style” really comes from the Qing. The qipao dress, for instance, was a Manchu fashion that was made sexy during the 1920s. The iconic queue hairstyle—in which the hair on top of the head is shaved, and the back is long and braided—was also Qing. When the dynasty was overthrown, there was even a campaign to rid the country of the hairstyle. Posters were erected with the warning “Give us your queue or give us your head.”

Due to its length and temporal proximity to today, the Qing can be seen all throughout China in the form of architecture, artifacts, and art. Of course, one of the best places to experience the Qing is in Beijing, the capital of both the dynasty and the People’s Republic of China. The infamous white marble boat in Beijing’s Summer Palace, for example, was built under the command of the Qianlong Emperor, using funds earmarked for naval expansion.

Other top travel sites related to the Qing include Shenyang’s Mukden Palace, Shanghai’s Jing’an Temple, and the Eastern Qing tombs, just outside of Beijing. 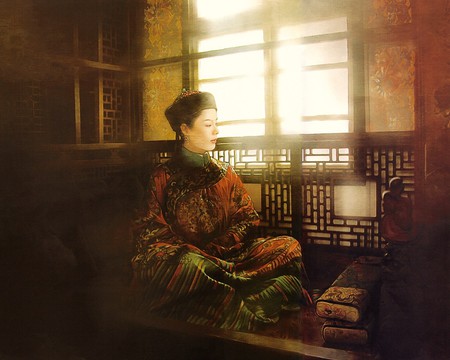