A Brief History of Beggar's Chicken 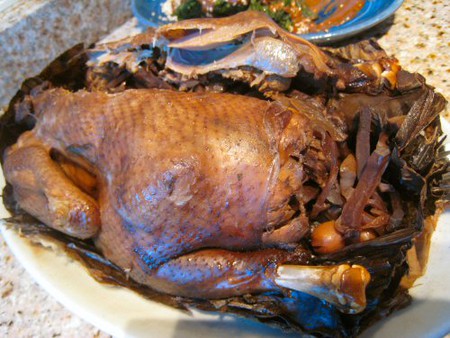 Who first thought of caking a chicken in clay, and how did it get the name beggar’s chicken? Perhaps it was just a clever chef, or maybe, as legend has it, beggar’s chicken is the key ingredient in a rags to riches story for the ages.

As with many dishes in China, the origin of beggar’s chicken is based on legend. No one is quite sure how the story really goes, just that the result is a deliciously tender and juicy chicken. A single beggar’s chicken is a six hour process. First, the bird must be stuffed with a savory pork mixture, then encased in clay, and roasted. When it is ready to serve, a waiter or lucky guest will tap the hardened clay with a mallet, revealing the fall-off-the-bone meat inside.

Are its origins as humble as the dish’s name suggests?

Perhaps. Every version of the story begins with a beggar. The most popular tale has it that, during the Qing Dynasty (1644-1911), a hungry beggar from Changshu, Jiangsu province stole a chicken from a local farm. Just as he was getting away, the farmer spotted him and chased the beggar to a riverbank. Thinking on his feet, the beggar quickly buried the chicken in the water’s muddy edge and scampered away before he could be caught. 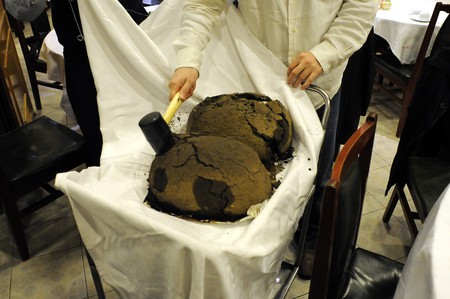 Later that night, when he was sure the farmer had gone home, the beggar returned to the riverbank with a torch. He made a small fire and dug up the chicken. Even hungrier than he was earlier, the beggar didn’t bother to wash the mud off, he just placed the bird directly on top of the open flame. 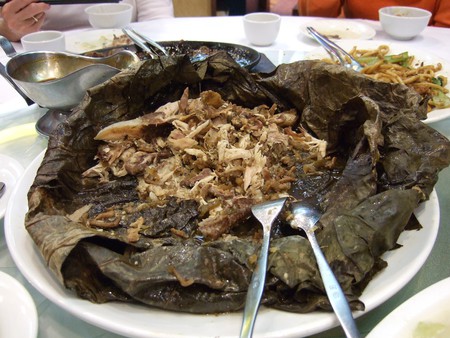 The heat from the fire hardened the mud into a tight clay, and when the beggar knocked it off, he saw that the feathers fell right off the chicken.

The beggar knew he had cracked open a culinary goldmine. He began selling the chicken in his village, and news of the unique dish spread far and wide, finally reaching the emperor himself. The emperor traveled to Changshu and dined in the beggar’s home. He was so impressed with the beggar’s chicken that he officially added it to the imperial court menu, solidifying its place as a haute cuisine, a label the dish still carries today.