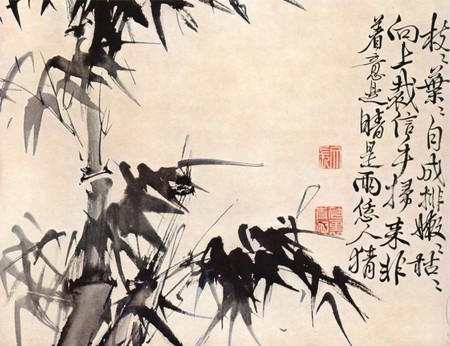 Ink painting has been an integral part of Chinese literati culture for thousands of years, and for thousands of years, the paintings have remained relatively the same. It has only been within the last one hundred years that contemporary artists have begun elevating the style beyond its traditional origins, incorporating new mediums and concepts that make the paintings applicable to a modern context.

Perhaps one of the best known names in contemporary Chinese ink painting, Liu Dan was trained in the traditional styles of Chinese painting and has devoted himself to ink and brush techniques, integrating aspects of the western masters whom he also admires. He is most famous for depicting landscapes, flowers, and guai shi – or “odd stones”– and his paintings often take top dollar at art auctions like Sotheby’s. Liu currently lives and works in Beijing, with exhibitions around the world, particularly the United States. At first glance, his paintings could be mistaken for cultural relics created centuries ago, but Liu Dan is a contemporary literati able to capture the essence of modern China through the framework of its past.

While Liu Dan prefers to work within the mold of traditional Chinese ink painting, Taiwanese artist Tseng Ting-Yu subverts the traditional form. Gallery director of Da Xiang Art Space in Taichung, Taiwan told Artsy that Tseng’s work is “representative of contemporary ink art’s increased focus on concept rather than craftsmanship.” His pieces are created to make a political or social statement rather than exist simply as an aesthetic. Born in 1983 and educated at Taiwan Normal University, Tseng emerged on the art scene in 2004, but it wasn’t until 2014 that he started to gain more widespread attention.

Born in Foshan, China, Yang Jiechang emigrated to Paris in 1989, at which time and place he began to gain international acclaim. One of his earliest series’, titled Hundred Layers of Ink, is still his most famous. For each piece in the series, Yang applied up to four layers of fresh ink daily until the paper had reached saturation. The final products of this process are beautiful accumulations of dried ink that appear sculptural and marbled. Leading up to September 11, 2001, Yang’s paintings remained introspective; however, Yang was deeply affected by the attacks and subsequently turned his focus towards more critical subject matters.

The first thing most people notice about Lin Yusi’s paintings is that they are much less monochromatic than those of many of his contemporaries. Lin has gained acclaim for his ability to blend color techniques with the freehand brushwork associated with the traditional style. He is furthermore able to apply the gongbi approach, which is a careful realist technique that focuses on details and often depicts figural or narrative subjects. Lin is a prolific painter, producing endless conceptual fable paintings of landscapes, flowers, birds, and people. Like Liu Dan, Lin has made a name for himself among art collectors, with his pieces frequently being sold at auction.

Fell in love with this artist #linyusi

This #targetfirstsaturday we'll be connecting cultures through an eclectic mix of art, activities, and music by @i.l.u.s.h.a @lafawndah_ & @oshunnyc. Also, as part of Asia Contemporary Art Week, renowned Chinese calligrapher #WangDongling will join us to perform a live rendition of the Heart Sutra, one of the most important texts in Buddhism, in his groundbreaking "chaos script." See the full lineup at bit.ly/bkmfirstsat.

Before his death in 1975, Lui Shou-Kwan was a pioneer of the New Ink Movement. Based out of Hong Kong, the movement focuses on adapting millennia-old techniques to the expressionistic and conceptual context of contemporary art. As an established name in the style, Lui has exceeded expectations at auction, his pieces selling for millions on estimates in the hundreds of thousands. In his paintings, Lui maintains a near spiritual connection to his materials. Every drop of ink has a purpose, and often, particularly in his later works, Lui will only place a few thoughtful strokes on the paper.

Trained in calligraphy in Shanghai, Wang originally focused on the art of writing. But when the ash from his lit cigarette once fell onto xuan paper, Wang became mesmerized by the way heat could hollow paper and began intentionally burning his works with cigarettes or incense. His pieces now integrate language, texture, and image into a unique and innovative medium that obscures meaning. Wang is highly experimental. In addition to his ink paintings, he has also produced digital photography whose subject matter is burned paper piled up to give the impression of a mountainous landscape.

Liu Kuo-Sung (Liu Guosong) is widely regarded as one of the earliest advocates and practitioners of modernist Chinese painting. Born in 1932, Liu revolutionized traditional ink landscapes by incorporating vibrant colors at a time when everyone else saw things in black and white. Yet Liu is also able to work within the classical framework, focusing on shan shui hua, or “mountain water paintings.” Instead of leaving a blank space where the water ought to be, like the ancients did, Liu depicts water in intense hues corresponding to the time of the year: red for autumn or green for spring.