6 Tremendous Day Trips Outside of Chengdu 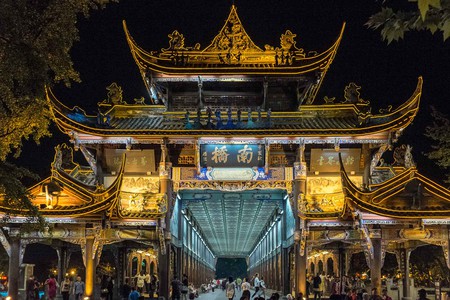 Panda Base | Courtesy of Charlie Moseley

If you find yourself in the Sichuan capital, far away from the Great Wall in Beijing, the Bund in Shanghai, and and the Terracotta Warriors in Xian, congratulations. You’ve made it to a destination prized for its cultural heritage for thousands of years. Long nicknamed “The Land of Abundance” for it’s history as China’s agricultural base, there is no shortage of destinations near Chengdu to check out.

One thing to note straight away, much of the most beautiful landscape in the vicinity of Chengdu is of a sensitive nature. On a clear day in Chengdu you can see the mountains to the West, which are the foothills of the Himalayas, part of the Tibetan region of China. In recent years there has been political turbulence over the issue of Tibet, resulting in travel restrictions for foreigners. Unfortunately, some of the areas West of Sichuan aren’t as easy to travel in as they were previously.

This irrigation project, constructed over 2,000 years ago, is one of the world’s cultural heritage sites recognized by UNESCO. Amazingly, despite it’s age the Dujiang Yan irrigation system continues to benefit over 40 neighboring counties in Sichuan province. It is the oldest no-dam irrigation system in the world and something of an engineering miracle. As it turns out, China has a historic knack for designing and implementing engineering marvels.

To get to Dujiang Yan, there is a bullet train from Chengdu Railway Station which takes about 45 minutes. When you get off at the Dujiang Yan station, you can take Bus 4 to reach the Dujiang Yan Scenic Area. 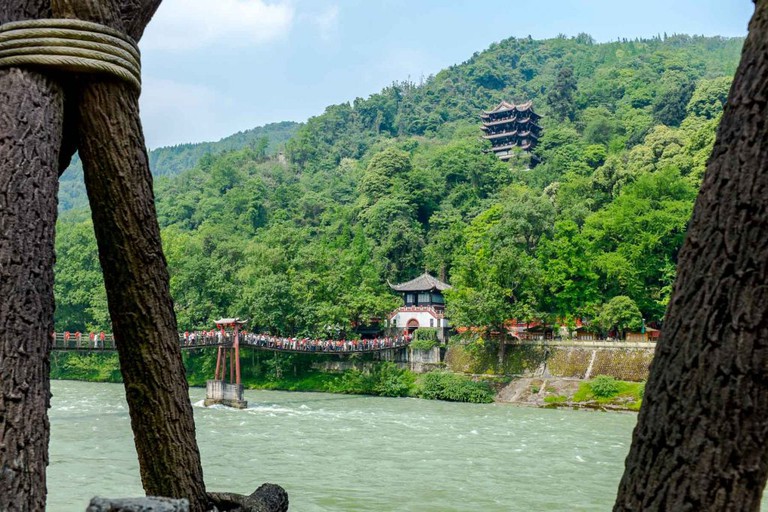 Located near Dujiang Yan, Mount Qingcheng is one of the most important Taoist sites in the world. The mountain range has 36 peaks, and in Taoist mythology it is the site of the Yellow Emperor’s studies with Ning Fengzi (this sounds obscure but Chinese all know it). Due to its rich Taoist history, the mountain is home to dozens of temples, although many were destroyed in the 2008 Sichuan earthquake. 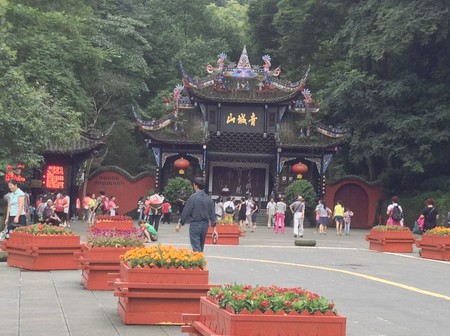 When you visit, you will have the option of going up the front or back side of the mountain. While the front has more temples, the back is quieter and more serene. Bring your camera, it’s beautiful.

This mountain has been the subject of countless Chinese poets and philosophers, who have called it “The most peaceful and secluded mountain under heaven”. It’s a peaceful getaway.

Located on the Eastern edge of Chengdu, Flower Town (called Sanshenxiang in Chinese) is mostly a weekend destination for Chengdu residents. As the name suggests, Flower Town is famous for being dotted with flower-filled nurseries. If you go on weekends when the weather is nice, expect large crowds. This is a great place to sip tea, take walks, and smell the flowers.

A favorite way to get to Flower Town is to ride a bicycle. There’s a local bike shop in Chengdu called Natooke which occasionally arranges bicycle tours to Flower Town. If the timing of your visit doesn’t work with their tours, you can rent bicycles at their shop and get directions from the friendly proprietors on how to schedule your day trip. You can also take a taxi to Flower Town.

Once you get to the large gate at the entrance of Flower Town, you are best off walking. You can spend a few hours wandering around the area, and there are many restaurants and bed & breakfast locations in Flower Town as well. In Chinese these are called Nonjiale’s but operate essentially the same way as a B&B would. If you plan on staying at one, you are best off bringing a Chinese speaker with you! The level of English language is likely to not be very high.

This colossal stone statue of Maitreya has been a UNESCO heritage site since 1996. Standing an incredible 70 meters tall, you will feel like an ant when you’re standing next to this buddha carved out of the side of a mountain.

Started in 713 AD by a Buddhist monk named Haitong, the carving of the statue continued for 90 years before it was completed in 803 AD. Today it remains the largest sculpture of Buddha on the planet and attracts pilgrims and tourists from near and far.

There are boat tours which you can arrange to view the buddha from a distance, but otherwise you will climb many stairs. It is an amazing sight. If you can help it, don’t go on a weekend, as it is can be very crowded.

If you want to see the most architecturally developed region of the city, it’s Chengdu’s High Tech Zone. What many don’t know about Chengdu is that although the city is designed with concentric circles emanating from Tianfu Square at the center, the city’s planners have another idea. They intend for the future center of the city to not be in the geographic center of the city, but in the south.

One of the world’s largest software parks, the Tianfu Software Park to the south of Chengdu has around 50,000 people in it. The rows and rows of office buildings seem to go on forever. Although many of the buildings look very similar, you will see Chengdu’s most architecturally adventurous buildings here. The type which Chinese president Xi Jinping took a position against when he banned “weird architecture” just a few years ago.

To get to the High Tech Zone, it’s best to go by car south along Renmin Nan Lu, the city’s main north/south artery. You can also take the subway but to see all of it would be an extended walk.

This is a must-see day trip outside of Chengdu. Only in Sichuan province can you see the giant panda in its native habitat, and with over 30 pandas on site, this is the best place to do that.

The base itself is a large facility which will guide you through the panda’s natural living environment. It was designed to recreate the natural habitat as closely as possible, not just for the pandas themselves but for visitors as well. 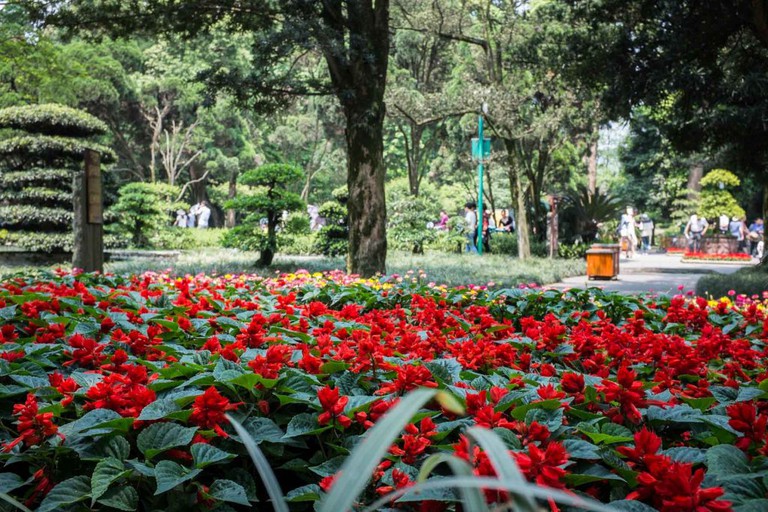 Flowers at the Panda Research Base | Courtesy of Charlie Moseley

Entrance is 58 RMB and the easiest way to get to the Panda Research Base is via taxi, although buses are available as well. You are best off visiting this location in the morning, as pandas are active and fed then.