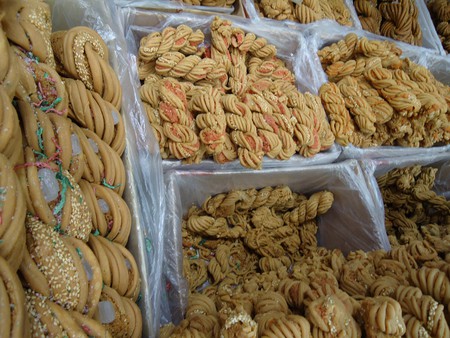 A seaside town with an incredibly diverse history, Tianjin has produced some of your favorite Chinese foods. Make sure you sample at least some of these six tasty, traditional dishes on your next visit to Tianjin.

Goubuli Baozi is Tianjin’s premier homegrown snack. Baked to perfection, these steamed buns can be stuffed with meat or vegetables and are a cleaner, succulent version of dumplings, with less oil and more filling. Goubuli was created during the Qing Dynasty by a small town native named Dogy, who came to Tianjin and apprenticed in a restaurant that specialized in baking stuffed buns. He ended up opening his own shop, where he improved the stuffed buns so much that eventually he and his recipe became famous nationwide.

Dogy was given the nickname Goubuli by his customers. It means “Dogy doesn’t talk” because he was too occupied making buns to talk to them in the restaurant. The Goubuli Bun Shop stands today as a corporation; with nearly 90 branches in Tianjin and more throughout China. Try as many buns as you can, there are over 90 varieties and over 200 dishes in Goubuli’s restaurants.

This sweet snack is a traditional dessert on Chinese New Year Eve. Tangdui is made of hawthorn berries. First the hawthorn berries are hollowed out and filled with red bean pastes, nuts, or seeds, and then grilled on a short bamboo stick. Once out of the fire, they’re drenched in syrup and left to cool, while being coated in crystal sugar. Nowadays it’s not just hawthorn berries that make Tangdui; apples, pears, and other fruits are prepared in the same way.

Ear-hole Fried Cake actually has nothing to do with ear holes, nor does it look like one. Introduced over 80 years ago by peddler, Liu Wanchun who walked with a wheelbarrow full of these cakes along Tianjin’s Bei Da Guan, a narrow street that resembled an ear-hole. The cakes started gaining notoriety on the streets and Liu opened his own shop. Made with rice dough and red bean filling, when finished, this pastry has a golden color and is crunchy on the outside while sweet and tender within.

Fried Dough Twists look a little complicated to make, and they are. These knotty shaped pastries are made with flour and peanut oil and are pumped with a waxy paste made of beans. This crispy specialty snack stays fresh for a few months so you can take some home and share a taste of Tianjin.

Chatang is one of Tianjin’s most revered liquid dishes. Grain is poured into boiling water and mixed with brown sugar. Real Chatang is prepared in a large, old-fashioned copper tea kettle and has its own distinct method of being served to customers. The Chatang chef serves the brew from a spout that resembles a dragon head, it is poured from afar in a streaming fashion, into multiple bowls each held in a customer’s hand. Check out a Chatang stall on your next outing.

This snack favorite is made of a kaleidoscope of specific local ingredients. Guobacai starts out as pancakes made of grain and bean flour before being sliced into linguine-like noodles. Then they are cooked in a sauce made up of sesame oil, ginger, soy sauce, green onions, and bean curd. They are best served alongside other Tianjin snacks and make an excellent breakfast.