Traditional Chinese music is renowned for its plaintive, almost haunting quality. The instruments used to express these sounds are so different from their Western counterparts, in technique, material and sound quality, that Chinese music remains a source of fascination for keen music lovers. We explore ten classic Chinese instruments that are worth listening to, reading about and perhaps even learning. 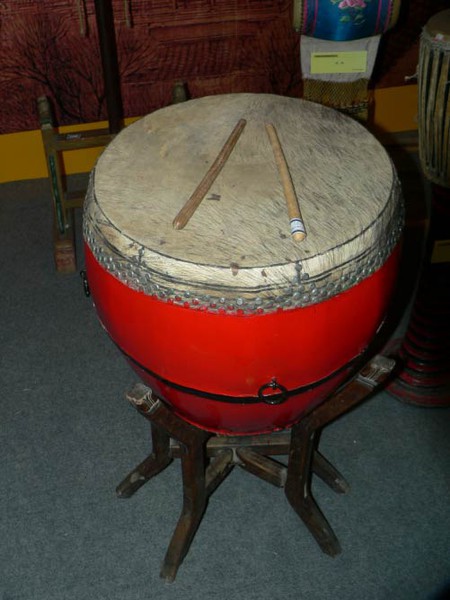 An integral part of any Chinese music composition, the ‘dàgǔ’ is the generic term used to denote the Chinese Bass Drum, which comes in two types: the huapenggu (a flowerpot-shaped drum), and the datanggu (broad-based drum). Placed in the ‘skin’ (革) category of instruments under the Classical Chinese categorisation of instruments, the drum has a body of wood, with cow hide surfaces stretched across the top and the bottom of the drum. The surface itself can be identified by its core, intermediate and outer rings, in which the intermediate ring is considered the heart of the drum; when struck, this intermediate ring produces low, sonorous sounds, as opposed to the lighter sounds produced on the outer ring. It is an important part of the Chinese orchestra, as it is considered an instrument capable of great expression and a broad range of sounds. 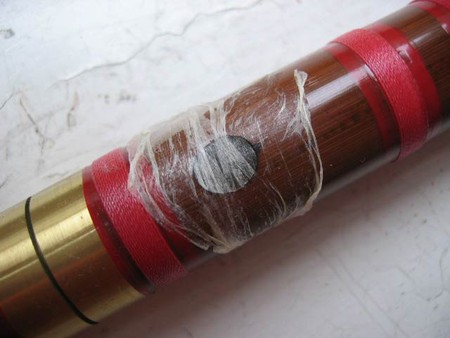 Classified under the ‘bamboo’ (竹) branch of the Chinese instruments family (as most woodwind instruments are made out of the hollowed-out stems of the bamboo tree), the dízi is a transverse flute that is played in a remarkably similar way to the Western incarnation of the metal-based flute. Boasting of a long and rich history in the development of Chinese music, dízis have been found in archaeological digs made of all sort of materials, such as green jade, stone, and even made of bird bones! Legend claims that dízi was an invention of one of the mythical emperors of China known as the ‘Yellow Emperor’ (Huangdi, circa 3600 BCE), whereas others claim it was an imported product into China during the Han Dynasty (circa 3rd Century CE). Either way, it is a widely used and popular instrument, the usage of which can be seen in folk music, Chinese Opera, and even in orchestral overtures. 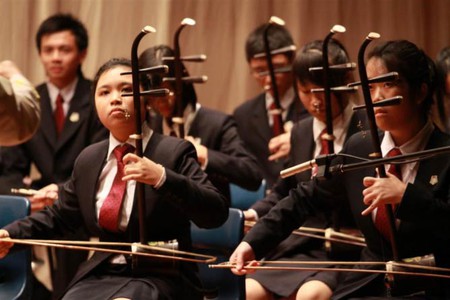 Sometimes known in the Western world as a ‘Chinese violin,’ the èrhú has earned a name for itself as being a notoriously difficult instrument to play to a level of perfection, as the instrument only has one string wound around the infrastructure of the instrument, so as to make it dual-stringed (as the Chinese name suggests literally). Believed to have originated from proto-Mongolic instruments brought into China over one thousand years ago (during the Mongol incursions into Imperial China), the èrhú is played in a similar way to a cello, except that the small size of the instrument allows the player to rest it on his lap. With a high, almost plaintive quality to its sound (much like the violin), the sound of the èrhú has come to be an icon of Classical Chinese music, with many modern Chinese pop-stars choosing to use it in their soundtracks and singles. 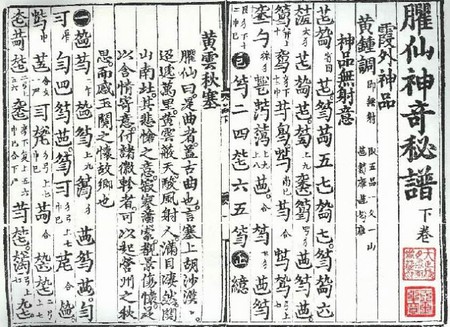 Categorised as a ‘silk’ (絲) instrument, due to the silk material used for its strings, the gǔqín is a seven-stringed zither greatly favored by the literati for its qualities of refinement and subtlety. Apparently, there is a famous Chinese saying which claims that ‘a gentleman does not part with his qín…without good reason.’ It is also considered the ‘father of Chinese music,’ as it is an instrument with deep associations with the famous Chinese philosopher Confucius (500 BCE). The instrument itself requires a wide variety of techniques (1070 in total) that aid in providing three types of sound: ‘scattered sounds,’ in which the required string produces an open sound; ‘floating sounds,’ which are harmonics in which a clean and crisp sound is produced; and ‘stopped sounds,’ which are by far the most common and are produced by a method that is comparable to the Western slide guitar. There is such a great tradition for playing the gǔqín that several schools in different parts of China has been set up over the centuries, dedicated towards the teaching of playing technique. 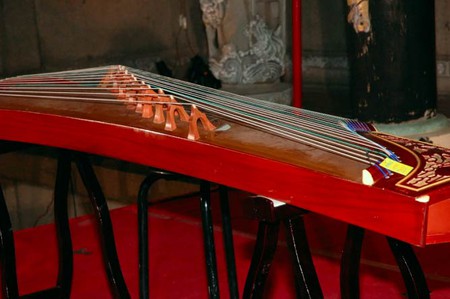 Though gǔzhēng is also a zither, it is not to be confused with the gǔqín, as the gǔzhēng has moveable bridges underneath the strings, unlike the gǔqín. It is a zither with 18 or more strings (modern incarnations of it tend to have 21 strings), and the plucking technique with which sound is created tends to be facilitated by a pick of sorts (usually made of turtle shells). It is also the Chinese ancestor of several Asian zither instruments, such as the Japanese koto, and the Korean gayageum. Like the gǔqín, the gǔzhēng has several different plucking techniques which can be utilized, some of which can create sounds evocative of cascading water, the gallop of horse-hooves, thunder, and even of the picturesque countryside. An instrument of great versatility and range, the gǔzhēng has been a popular choice for Classical musicians for centuries. 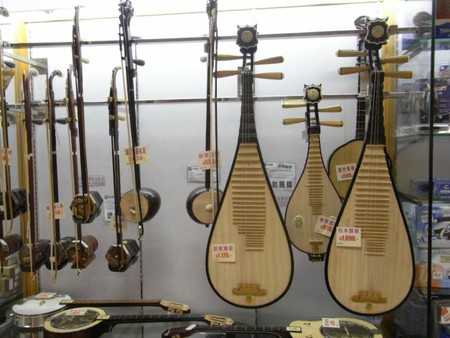 A lute similar in structure to ruǎn, though it has a novel pear-shaped base (unlike the more cyclically shaped ruǎn), the pípa has long been a popular instrument of choice for musicians. Directly related to the Japanese biwa and the Korean bipa, the pípa has long been considered an instrument that is more than merely a tool for playing music; in fact, the pípa has often been referenced in later literary traditions of China, as it has always been considered the instrument of the consort Wang Zhaojun, one of the four legendary beauties of China. Her image is so associated with this instrument that music and art often reference it, with one composition being called ‘zhaojun’s lament‘ (which uses the pípa has its main instrument of choice), and paintings often depicting her carrying or playing one. 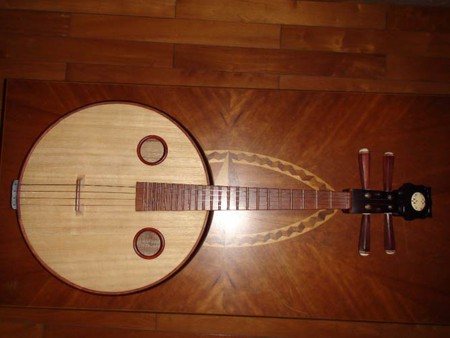 Though formerly a part of the ‘silk’ (絲) family of instruments, the strings of the ruǎn have long been replaced by steel string in the modern age. The Chinese equivalent of a lute, it has a completely round body, a long fretted neck and four strings. The frets have historically been fashioned out of ivory, but, since restrictions on the distribution and usage of it, there has been a tendency nowadays to use metal mounted upon wood; this tends to create a brighter sound when used. There are five different types of ruǎn, which can be classified according to the Western sound system: soprano, alto, tenor, bass, and contrabass ruǎns. Creating a sound that is not dissimilar to the Western guitar, the ruǎn tends to be used as an accompaniment to another instrument (such as the pípa) rather than as an instrument for solo pieces. 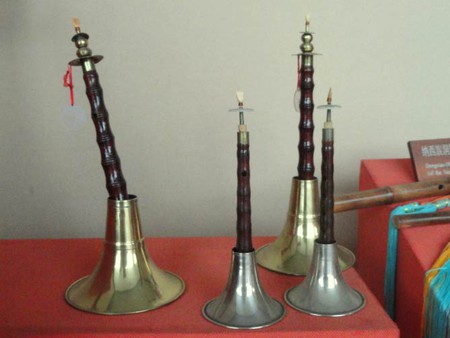 An instrument which is often considered a ‘Chinese oboe,’ the suǒnà is a woodwind instrument with a double reed and a detachable metal bell attached to the end of the conical wooden body. It is believed to have evolved from a Central Asian instrument that was probably introduced into China via the Silk Road. Known for its distinctly loud and high-pitched key, the suǒnà forms an integral part of Chinese folk and traditional music, with it being used especially for festivities and military purposes. It has an even more specialized purpose in Taiwan of being used in the ritual music that accompanies Daoist religious practices during both auspicious and inauspicious rites (i.e. sacrifices and blessings for the living and the dead). 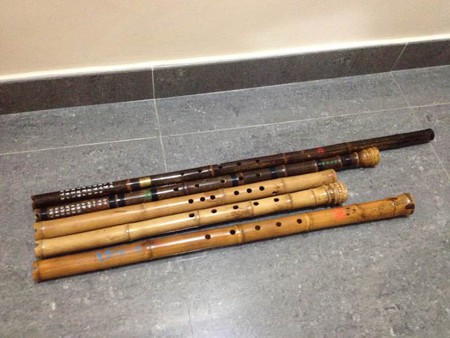 Another instrument of the woodwind category, the xiāo is a vertically played end-blown flute which can be considered the Chinese equivalent of a recorder. Almost always being made out of bamboo (hence deserving its label as a ‘bamboo’ (竹) category instrument), the xiāo is one of the oldest-attested instruments in the Chinese region, and it is also one of the most popularly used instruments in the Chinese pantheon, as its small size and easy acquisition made it appealing for reasons of portability and economy. Also related to Chinese panpipes, and the ancestor of several Asian incarnations of the xiāo, there are three different types within the category of xiāo itself: the standard dongxiao; the narrower qinxiao, the which has a softer sound; and the nanxiao, which is shorter in length. 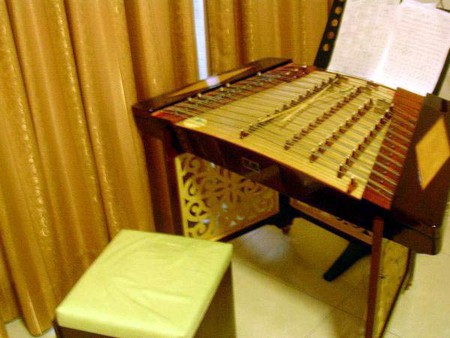 One of the few instruments that is struck as opposed to plucked, within the Chinese string instruments, the yángqín is a hammered dulcimer that was brought into China from the Persian Empire (modern-day Iran). Interestingly enough, the Chinese used to call it a ‘yángqín’ 洋琴 (literally meaning a ‘foreign zither’), but the name changed over time to ‘yángqín’ 揚琴, which instead means ‘esteemed zither. Using what is usually compared to ‘drumsticks,’ the yángqín can be used both as an accompaniment in a larger orchestral piece, as well as in a solo composition. With related instruments being popular in Eastern Europe, the Middle East, India, Iran, and Pakistan, as well as China, the yángqín has enjoyed several evolutions and modifications over the centuries, thus providing a wonderful variety of different effects and sounds according to the differing materials and techniques applied to it.