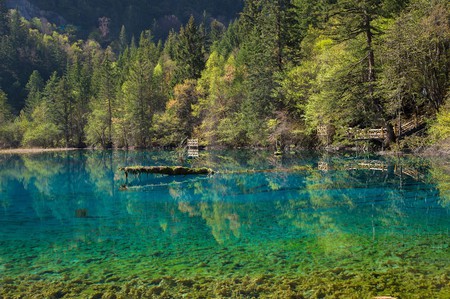 In China, a national park must possess historical or scenic importance. So you can expect spectacular scenery and landscapes, cultural sites, and rare plant and wildlife. In total, there are now 225 national parks within China. The first batch was created in 1982, and the last set was established in 2012. Many are also UNESCO protected sites. Here are 10 of the most amazing to visit.

Jiuzhaigou is made up of the Rize, Zechawa and Shezung Valleys and spreads over 72,000 hectares in Sichuan Province in western China. Its name means ‘Valley of the Nine Fortified Villages,’ with seven of the historical sites still inhabited today. Jiuzhaigou was barely known to outsiders until the 1970s and is now not only a National Park but has protected status as a unique biosphere from UNESCO. Jiuzhaigou is home to countless rare species of plants and animals like the giant panda, red panda, Sichuan takin and the snub-nosed monkey. Its terrain is made up of mountains, ancient woodlands and the beautiful turquoise lakes known to locals as ‘haizi,’ so clear that the lake bottom can easily be seen.

The Longmen Grottoes stretch along one kilometer of the Yi River in Henan Province in central China. A few miles away is Luoyang, once one of the Four Great Ancient Capitals of China. The Grottoes are a series of caves and stone carvings. There are 2,300 caves and 110,000 statues in all, with the smallest being just an inch high, and the largest statue of the Buddha, a huge 57 feet. All are devoted to Buddhism and represent the high point of the artistic achievements of the Northern Wei and the Tang dynasties who ruled between the fourth and tenth centuries. You can also find thousands of inscriptions and stelae plus 60 Buddhist pagodas that make up the national park. 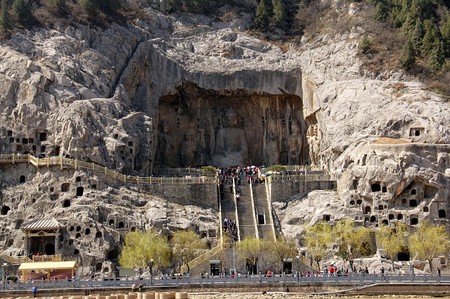 In Hubei Province, Shennongjia is 90,000 hectares of mountains, rivers and dense coniferous forests in which many sightings of the mythical Yeti have been made. Researchers come here from all around the globe to research rare species like the white bear, white monkey and the white muntjac. There are countless mountain peaks above 2,500 meters, areas that have a subtropical climate and colder parts that feel the winds that come from Siberia. Shennongjia is another Chinese National Park with protected status from UNESCO. Amongst the flora of the region, there are 1,131 types of plants recorded in Shennongjia, which takes its name from the mythical ruler Shennong who is said to have introduced the practice of agriculture into China. 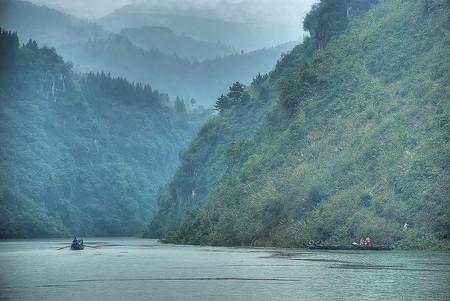 The Shilin Stone Forest is a strange landscape made up of weird limestone formations that dwarf humans and seem to grow out of the earth. In the Shilin Autonomous County in Yunnan Province in southern China, the stones that make up the forest have eroded over 270 million years until taking the form they do today. The Shilin Stone Forest forms part of the wider South China Karst UNESCO World Heritage Site and is made up of caves, lakes, waterfalls, and several stone forests, including the Greater and Lesser, and the Naigu. It’s an especially important site for the minority Yi people, who celebrate a festival here each year and believe one of the great stone columns was once a girl, forbidden to marry her lover, who came here and turned herself to stone forever. 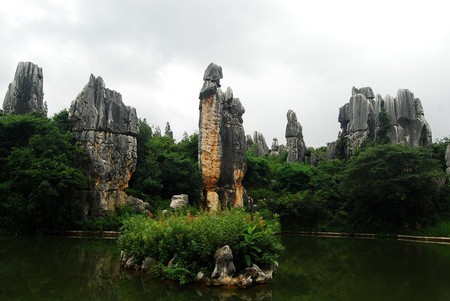 The Mount Sanqingshan National Park comprises 23,000 hectares in Jiangxi Province in eastern China, part of the Huyaiyu Mountains. It’s a national park, a Geopark and is another UNESCO World Heritage Site that has developed its unique scenery and ecosystem over millions of years. The park is full of curiously shaped granite peaks and pillars that appear like the silhouettes of strange beasts against the sky. Mount Sanqing itself is a significant site in Taoism; it’s made up of three peaks, the ‘Three Pure Ones’ that signify the Tao Trinity believed to be the origin of all things. Among the rare species to be seen in Mount Sanqingshan are European otters, black muntjac deer, and Chinese ferret badgers. 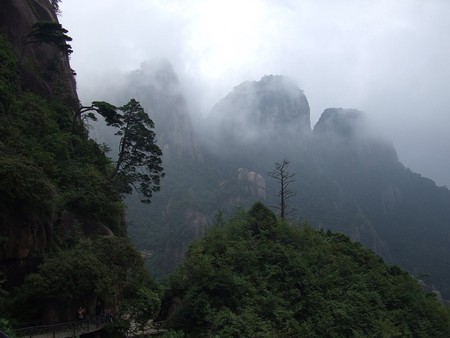 Also in Jiangxi Province, Lushan is another important spiritual site famed for its natural beauty. Lushan was once the Summer Capital of the Republic of China and a favorite location of the political leaders Chiang Kai-shek and Mao Tse-tung and amongst the Western missionaries who came to China in the 19th century. The 30,200 hectares of the park are full of mountains, caverns, lakes and botanical gardens, along with important Buddhist, Tao, and Confucian sites that date back over 2,000 years. The key places to see are the Donglin Temple where Huiyuan founded Pure Land Buddhism in the 4th century and the White Deer Grotto Academy, which has roots in the 10th century and was an important center for the spread of Confucianism. 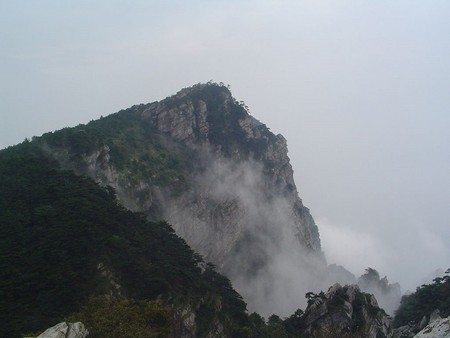 The Lijiang River Scenic Zone in Guangxi Province in southern China covers the 116 kilometers from Guilin along the Lijiang River to Yangshuo. The area has been recognized for its natural beauty at least since the Song Dynasty of the 10th century. Along the banks of the river are huge pinnacles and rock columns, karst caves and forests. Cruise boats take visitors along the course of the Lijiang every day, which is a major tourist attraction within China. The main sites along the course of the river are the huge Reed Flute Cave, the thousands of carvings made in the rocks that line the river, and the Lingqu Canal built by the Qin Dynasty in the 3rd century BC, which remains the oldest canal in the world still operating. 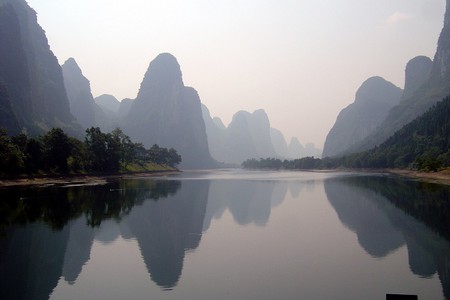 In 1982, Zhangjiajie became the first National Forest Park in China. It’s now also a UNESCO Global Geopark and is part of the larger Wulingyuan Scenic and Historic Area World Heritage Site. In Hunan Province in central China, Zhangjiajie and the wider Wulingyuan area are famed for the three thousand sandstone pillars that dominate the landscape. In between them are gorges, ravines, waterfalls and streams. The sandstone columns were formed by the expansion of ice within the rock and plant roots slowly burrowing into the surface, causing the rock to disintegrate slowly over millions of years. One of the great pillars was formerly known was the Southern Sky Column and is now the Avatar Hallelujah Mountain, as it inspired the scenery of the 2009 movie. 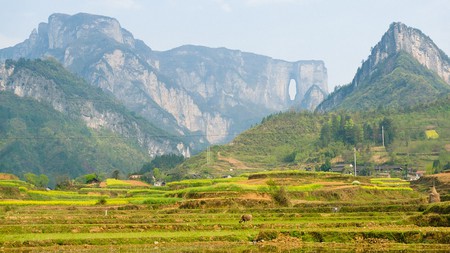 Mount Huangshan has been a hugely important cultural site since the days of the Tang Dynasty in the 8th century. Legend says that the elixir of immortality could be found at the top of the mountain. Over the centuries, the area attracted poets, hermits and artists, especially the landscape painters of the Shanshui School during the Ming Dynasty of the 16th century. In Anhui Province in central China, Mount Huangshan is made up of granite peaks, hot springs, pine forests, and a sea of clouds that sits just below the peaks through much of the year. In all, there are 15,400 hectares of protected park full of rare creatures like the greater spotted eagle, the gray wolf and the Asiatic wild dog. 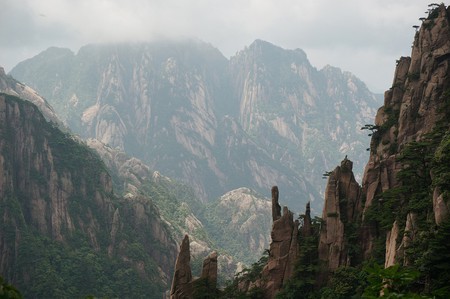 Mount Song is close to the city of Dengfeng in Henan Province. It holds a central place in Taoism and Buddhism and is the Central of the Five Sacred Mountains to which the emperors of China would go on pilgrimage. The peaks of the mountain stretch for 60 kilometers along densely forested valleys. In these valleys, you’ll find the famous Shaolin Temple, the birthplace of Zen Buddhism and Shaolin Kung Fu over 1,500 years ago. And the Zhongyue Temple has been one of the main Tao centers in China since the 3rd century BC. It was made up of 900 rooms in its heyday in the 11th century. These sites are not just part of the national park but also the UNESCO site named ‘The Historic Monuments of Dengfeng in ‘The Centre of Heaven and Earth‘, a reference to the Dengfeng Observatory that dates back to around 1000 BC, believed to be the center-point of the heavens and the only place where astronomical readings were correct. 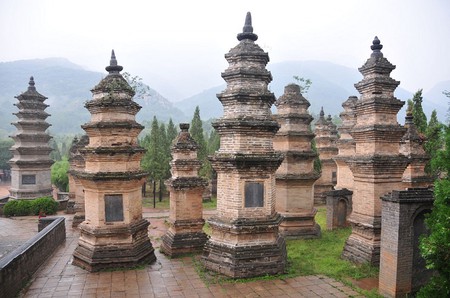