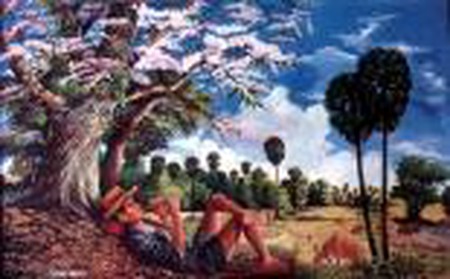 Vann Nath was one of the handful of prisoners who survived the S-21 Prison under the Khmer Rouge Regime, owing his life to his talent as a painter. His harrowing experience at S-21 triggered a life-long pursuit of justice and remembrance; but it is the sickening scenes of torture and death depicted in his paintings that constitute the most vivid account of the horrors of S-21 and the crimes of the Khmer Rouge. 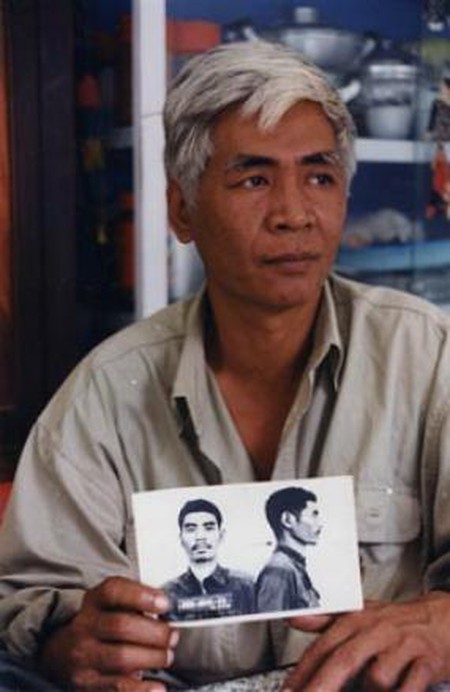 When Vann Nath was born into a poor family in the Battambang province of Cambodia in the 1940s, nothing prepared him for his extraordinary destiny. Nath’s parents could not afford school fees so the child was sent to serve as a Buddhist monk for four years when he turned seventeen. Stunned by the exquisite beauty and complexity of the paintings adorning the temples, Nath enrolled at an art academy to study French Impressionism.

Until 1975, Vann Nath led an eventless life as a painter, mostly working on film posters and landscapes. Things began to change when the Khmer Rouge came to power and began to implement radical agrarian reforms, which forced him and his family to move to the Norea agricultural commune in order to work on a farm. On December 29, 1977, Nath was accused of violating the Angka moral code and he was brutally arrested while working in a rice field.

The Angka was a violent and mysterious group of leaders who exerted a powerful grip over the Khmer Rouge bureaucracy. The painter came from an impoverished provincial milieu and had never expressed political ideas, so his incarceration was unjustified. But this was the tragic — albeit common — plight suffered by countless Cambodian artists and professionals who were arrested and executed en masse under the Pol Pot regime.

Nath was immediately sent to the notorious Tuol Sleng prison, code-named “S-21,” a former French Lycée turned into a convenient murder house for the regime. Within these grey walls, 14,000 women, children and men were interrogated, tortured and executed between 1975 and 1979. As with most of his fellow inmates, Nath was awaiting death. His name was found on a 1978 execution list signed by Kaing Guek Eav, also known as Comrade Duch — the cruel head of the government’s internal security branch.

Against all odds, Duch found out that Vann Nath was an artist and scribbled an order saying, “Spare the painter.” At the time, Pol Pot was actively seeking out official portraitists and Vann Nath was commissioned to do various paintings and sculptures of the bloodthirsty leader. Nath could barely stand up after the repeated beatings he had suffered, and he did not think he would be able to paint. Moreover, he could only copy black and white photographs of Pol Pot, as he had never seen the leader. Nevertheless he succeeded, and it is no exaggeration to state that his talent saved his life. 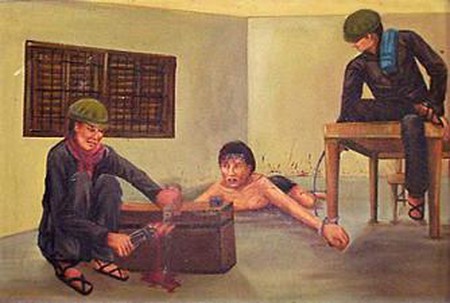 Vann Nath quickly realised that painting was not only his survival ticket, but also a golden opportunity to record on paper the barbarity to which he bore witness. He frenziedly started producing a visual memoir full of unbearable screams and salient deaths. Every new work brought up the forlorn hope that prison guards would enjoy what they saw, and let him live another day. In 1979, the artist finally escaped when the Khmer Rouge regime collapsed following the Vietnamese invasion. He was one of only seven prisoners who survived S-21.

The prison was subsequently transformed into the Tuol Sleng Memorial and Genocide Museum, where Vann Nath worked for several years. Today at the museum, one can still admire the excruciating paintings that proved to be his salvation. Following his regained freedom, Vann Nath relentlessly fought for justice for the victims of Pol Pot — using modes of communication such as writing, interviews and of course paintings. Prisoners at S-21 had promised each other that whoever survived would fight to expose their story to the world.

In 2001, Nath partnered with Cambodian filmmaker Rithy Panh to produce the documentary The Khmer Rouge Killing Machine, in which he was also largely featured. The film reunited former guards and prisoners either in the prison or at the Choeung Ek extermination centre, allowing Vann Nath, for the first time, to confront and question his torturers — which he did with formidable dignity. 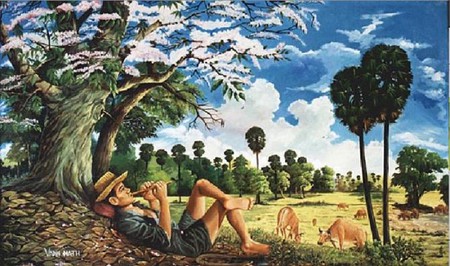 © Reyum Institute of Arts and Culture

From the 1990s, perhaps as a result of age and wisdom, Vann Nath steered away from his macabre paintings to dedicate himself to the recollection and representation of his childhood memories. The bucolic Village of My Birth (1998) depicts a young Vann Nath playing the flute under a blossoming lilac tree, whose delicate foliage melts into the clouds. The tranquil cattle and yellow fields exude a warm sense of nostalgia for a world still untouched by the genocide. The work was exhibited at the Reyum Gallery for the major show Legacy of Absence: A Cambodian Story in 2000.

It was not until 2009 that Comrade Duch was brought to justice in Phnom Penh for orchestrating the massacre of more than ten thousand Cambodians. Vann Nath, as a key witness in the trial, commented, “I have waited 30 years for this. I never imagined that I would be able to sit in this courtroom today to describe my plight, my experience. I hope by the end that justice can be tangible, can be seen by everybody.”

Unfortunately, he would never witness the outcome of the trial. When 69 year-old Duch was sentenced to life imprisonment for war crimes in March 2012, Nath had already passed away. Suffering from a severe kidney disease, the artist spent the last years of his life undergoing dialysis treatment before he died in September 2011.

Sara Colm, a senior researcher for Human Rights Watch, described Vann Nath as ‘the voice of conscience for Cambodia’. His artistic talent saved him from death and was duly recognised when he obtained an Arts and Culture Knighthood in France in 2004. In addition, Vann Nath received the prestigious Hellman/Hammett Award for Persecuted Writers in 2003 and 2006, and his work was showcased at Documenta (13) in 2012. The artist never gave up denouncing the Khmer Rouge atrocities, so aware he was that history tends to repeat itself. If only to honour the fierce commitment to justice he demonstrated throughout his life, we too should never forget.

Watch the trailer for S21 The Khmer Rouge Killing Machine: