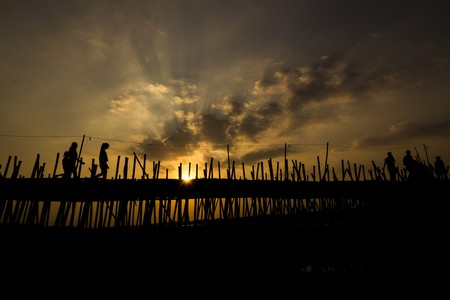 Phnom Penh is all too often seen as a stopover city for those heading to explore other parts of the country. However, it’s well worth extending your stay and heading to the areas surrounding the city. Here’s our guide to the best day trips to take from Cambodia’s capital, Phnom Penh.

As the ancient capital, Oudong sits about 44km away from Phnom Penh, a trip there can easily be turned into a lazy day escaping the city.

A tuk tuk ride takes a bumpy two hours, while a taxi can reach there in roughly half the time. Another more tranquil alternative is to jump onboard one of the many boats that do day trips to the sight from Phnom Penh. 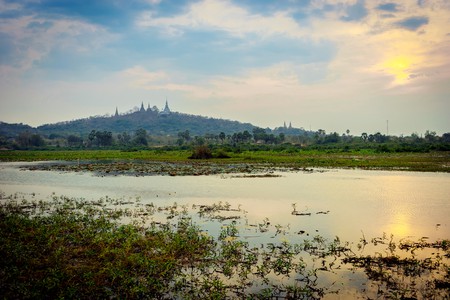 Standing glorious as Cambodia’s capital from 1618 to 1866 – a period referred to as Cambodia’s decline after the Khmer Empire – Oudong was the place where several kings were crowned and buried, holding a special place in many Cambodians’ hearts. At the base of the site expect to be bombarded by youngsters wanting to practise their English or escort you up the tiring flight of 509 steps and through the sites atop Phnom Oudong.

Reaching the peak of the mountain – more of a high hill – brings with it unparallelled views of the surrounding plains that stretch to the horizon, as well as a range of historic and religious gems. A series of temples and stupas contain the ashes of kings, such as the stupa Damrei Sam Poan, which was built by King Chey Chetha II (1618-26) and holds the ashes of his predecessor, King Soriyopor. As with most of Cambodia, there are nods to its recent violent history, with bullet holes from Khmer Rouge battles scarring the landscape . And at the foot of the hill there is a memorial to Khmer Rouge victims containing bones.

At the base, you’ll also find a collection of stalls selling snacks, food, drinks and other souvenirs. Tuck into the grilled catfish and bamboo shoot salad, which is devoured by locals at picnics on the row of hammock-filled bamboo huts that line the road. Vipassana Dhura Buddhist Mediation Centre also sits close to Oudong and is well worth a visit to see its pristine shimmering pagodas. Visitors are welcome to wander around, provided they are dressed appropriately, which means knees and shoulders covered for women.

If you are looking for some tranquil time, then the province of Kampong Cham is the place to be. Nestled on the banks of the Mekong river about two hours from the capital by car, life trundles along at a slow pace.

The provincial capital, also called Kampong Cham, is Cambodia’s third largest city, although it still resembles a town. It was a thriving trading post under the French and evidence of this era can still be seen during a stroll through the centre, which is home to streets of crumbling colonial buildings.

About a 15-minute walk from the main riverside area is the longest bamboo bridge in the world. Rebuilt annually once the rainy season has passed and the Mekong River water levels have dipped, the rickety bridge is 1km long and made mainly of blonde bamboo poles.

Despite its precarious positioning, vehicles of all kinds hurtle across this seemingly unstable structure, making it a delight to sit on the banks and watch the wonders that pass by.

Cross the bridge to reach Koh Pen, a scenic island that is home to clusters of serene villages, winding lanes and stilted houses.

For a fun-filled day for all the family, Phnom Tamao Wildlife Rescue Centre ticks all the boxes. The wildlife animal rescue and rehabilitation centre, run by Wildlife Alliance (WA), sits about 36km outside of the capital.

It is worth noting that this is not a zoo, but is home to more than 1,200 animals that have been rescued from the clutches of poachers and illegal trafficking. Animals that are in a fit state are rehabilitated before being returned to the wild, while those who are unable to be freed due to physical or psychological trauma have become permanent residents.

Home to hedgehogs, tigers, elephants, snakes, sugar gliders, leopards, gibbons and much more, guests can explore the sprawling grounds and spot the collection of rare and endangered animals as they are nursed back to health.

WA also puts on special ‘behind the scenes’ day tours, where guests can spend the day shadowing a worker, getting up close and personal to the animals and learning more about their stories.

The centre is also home to Free the Bears, which operates a Bear Keeper for a Day tour. This gives the chance to see how the rescued Asiatic black bears and Malaysian sun bears are cared for, preparing toys and food for them and hanging out with them – at a safe distance of course.

It may only sit about 6km from Phnom Penh city centre, but Koh Dach, or Silk Island, is a million miles away from capital life. While the trip can easily fit into half a day, it can be stretched out to include lazing on the beach – only accessible during dry season – sitting by the pool or sipping on a fresh coconut in the dappled shade watching local life slowly pass by.

It’s easy to get to Koh Dach, with any tuk tuk happy to take you for the day for about $20-$30. After a 30-minute ride across the Japanese Bridge and a short ferry ride, you’re there. Expect to be greeted by swarms of women vying for your business by inviting you to their homes to see the silk weaving process – the island’s speciality.

The oasis on the outskirts of the city is known for its rich silk-weaving history. While the tradition is on the decline across Cambodia, it remains popular on Koh Dach, with many women weaving on looms made from rusty bike wheels and other recycled parts under their stilted wooden homes.

The Silk Weaving Centre and Village is open to visitors and shows the whole process, from silk worm to cocoon to silk to fabric. The centre also boasts a small restaurant and picnic spot on the river, with a man made pool for bathing and an onsite boutique selling hand-crafted silk scarves and other items.

Offering a glimpse into rural living, there is a road that skirts the island which is ideal for a lazy bike ride past paddies and woodland, through small villages and across shallow streams. Bikes are available for hire at the ferry terminal. Popular stop-off points include Koh Dach Pagoda, which houses some of the island’s colourful boat entries into the annual Water Festival boat races.

Finally, the Coconut School takes guests on a tour of its grounds and is a fascinating project. Made entirely of recyclable materials, doors are made from glass bottles, walls from tin cans and signs from cleverly remastered waste. Le Kroma is a great place to stop for a breather, food and a swim in their infinity pool that overlooks the river. Their super thin and super crispy pizza comes highly recommended, with local dishes also on the menu.