Site/Cambodia, was an exhibition at Karin Weber Gallery, Hong Kong, which presented five contemporary Cambodian artists for whom ‘site’ is integral to their practice. Mao Soviet, Anida Yoeu Ali, Kim Hak, Sera and Srey Bandaul all navigate sites of change, displacement, melancholy, identity and spirituality, which speak to a Cambodia in transition.

Space, and memory of space, are themes that transverse the art of Cambodian artists who grew up in the country, and those who have returned from the diaspora carrying their memories of war and genocide, which have been transposed on to new realities. Also of importance is the identification of new spaces existing somewhere in-between and transnational, as Cambodia begins to profit from entering the global market.

The Cambodia of today is not what it was yesterday, or what it will be tomorrow. The soundtrack of the urban centers is a cacophony of building noise. Sometimes it is only at lunch, when tools are put down, in this small reprieve, we realize how constant is the change. The landscape is evolving; big buildings, mansions and industrial expansion, boutique coffee shops for the emerging middle class and expat stalwart.

The displacement of people amidst this change can, in fact, sometimes seem altogether invisible. People and communities — evicted, moved, sometimes forcibly, to sites further outside the city. What remains, however temporarily, is the evidence of these large communities in debris from their homes. A testament to their existence. An archive. It is this that is found in Battambang-based artist Mao Soviet’s work The Black Wood. Using abandoned objects from the sites of eviction, his work brings into plain view the narrative of those displaced in the new Cambodia.

Next, we have Daun Penh, in which Kim Hak speaks directly to a better-known story of displacement. What Hak is documenting is the eviction of over two million Cambodians from the capital city, Phnom Penh, by the Khmer Rouge, which began on the 17th of April 1975 and resulted in genocide. Photographing Phnom Penh in the moody rain from the back of a tuk-tuk, thereby creating a cinematic letterboxing composition, Hak is actually referencing the black fabric that was used to cover the victim’s eyes before they were executed. In a poetic call and response for this exhibition, Hak’s video calls for ‘the return home’ of those who departed to 3rd countries like America, Australia and France.

This call is heard by Khmer-American artist Anida Yoeu Ali who now lives and works in Phnom Penh. Growing up as a Khmer Muslim in Chicago she is drawn to explore her transnational identity between two sites. Consequently, she tends to locate herself both inside and outside of both, in the literal and societal spaces of her landscape performances. ‘I am constantly navigating a kind of insider/outsider perspective, often switching between the two depending on the situation,’ says Ali.

Séra turns to look at ‘site’ from a perspective of loss. His paintings capture iconically Cambodian landscapes, such as Angkorian temples, stupas and even the traditional form of dance, with a certain melancholia. Born in 1961, Sera left Cambodia for France as the Khmer Rouge took over Phnom Penh. His early chaotic memories characterize his frenetic style.

Artist Srey Bandaul looks inward, seeing the body as a metaphorical site of tension. Creating intestinal forms he speaks to the cycle of life, whereby the psychological meets the laws of cause and effect. Using fabrics synonymous with daily life and the protection of the body – the kroma, the sarong and mosquito netting – he locates this tension in the local communal consciousness, as well as more broadly within South Asia. He creates a critical dialogue about the politic of the local and the global. The digestion of the ‘outside’ or global influences into the main body creates visible ruptures in the intestinal form. Reflecting on a global instability, like the economic crisis of 2009 and the growing reliance on foreign investment and cultural commodities, Srey asks, ‘How can we protect the people; how can they be independent?’ 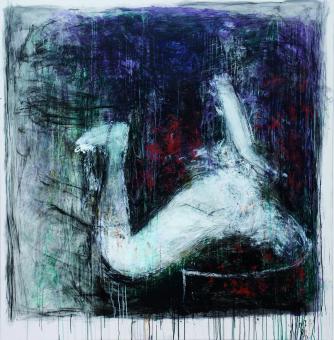 Cambodia as a site is loaded with contention of space, layered in memory and the ‘now’ personalized, communal and in transit. Using ‘site’, we bring space and memory together with visions and responses from local artists and returning Diaspora. This exhibition makes connections in site, the personalized and public. It demonstrates what sites can be owned, shared, celebrated, connected to body and its life cycle, psychology and environment, and what sites are prohibited to speak about.