How Cambodia's Bokator is Roaring Again 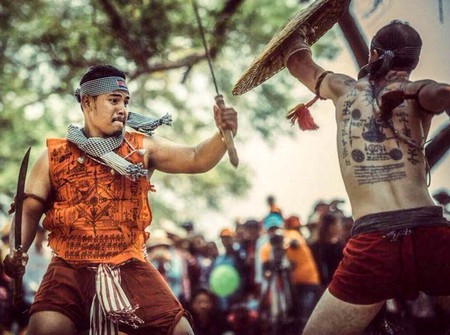 Overshadowed as Cambodia’s premier martial art for much of the past century by the more spectator-friendly Cambodian kickboxing (or Kun Khmer), Bokator has witnessed a government-supported comeback in recent years in line with country’s economic development and growing self-confidence. This resurrection has been aided by Cambodian-made martial arts films such as the wildly popular Jailbreak (2017), and success of Mixed Martial Arts (MMA) fighters such as Chan Rothana. 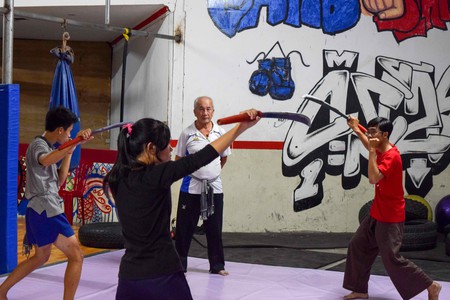 The upper floor of the building houses a practice boxing ring, MMA cage, numerous heavy bags and gym equipment – and a rack of swords.

The ‘old man of Bokator‘

San Kim Sean introduces himself as ‘the old man’ of Bokator. The 71-year-old teacher of the martial art and vice-president of the national federation has been a practitioner for much of the past 60 years, only pausing during the nearly four years of Khmer Rouge rule in the 1970s. The Khmer Rouge’s radical societal shift to communal agrarian living – which included evacuating all the cities and the forced mass migration of millions of people across the country and into the countryside – fractured Cambodian society and led to widespread death.

‘During the Pol Pot regime, I wasn’t allowed to think of Bokator. I was deaf and mute instead. It was the only way to stay alive,’ Sean explains. ‘In 1979 [when neighbouring Vietnam liberated the country], I left the forests of Kampong Thom province and came straight to Phnom Penh and the Olympic Stadium. From then until today, I have been involved in sport,’ he says proudly.

For almost 40 years, Sean has sought to train new generations, and to pass on his knowledge and passion, eventually helping to found the federation in 2004.

‘Bokator is the heritage of my ancestors. It developed from practical skills of farmers and soldiers,’ he said, explaining how this influenced the uniform and equipment modern practitioners use, such as the “Kel” (forearm guards made from bamboo), swords, spears originating from rice-threshing tools, and most importantly, the humble kramar, or traditional Cambodian scarf.

‘The weapons are male, they are violent, but the kramar represents women, with soft but effective movements. The kramar is the most important,’ he says, before demonstrating multiple attacking moves using only a scarf on a nearby hapless student.

‘In French I could tell you all about the history of our ancestors that is recorded on the walls around Angkor Wat,’ Master Kim says apologetically, to explain the reason for dropping into French throughout the interview when the English words escape him.

Recorded in the carvings of temple walls in the Angkor Wat archaeological park are 1,000 year-old depictions of Bokator. ‘They didn’t write, but instead put their history and advice for future generations on the walls.’

Unlike some other martial arts, Master Kim stresses that the focus of Bokator was less on force, and more on the mind: ‘The most important aspect of Bokator is meditation. This comes in three levels. Primary is for physical health, secondary for mental health, and advances gives energy.’

The eight students in the gym are of mixed experience. All are in their early 20s, and some are clearly long-term practitioners.

Tep Vathana, a 21-year-old International Relations student, however, has only been learning Bokator for two weeks. In a country where female participation in sport it has traditionally be frowned on, Vathana’s parents have been supportive of her efforts to exercise. They also have her safety in mind. ‘One of my friends received some sexual harassment, so I also think it is important for girls to know ways to help protect themselves,’ she explains.

Although her girlfriends think she is weird for wanting to learn Bokator, the nightly two-hour sessions at $25 a week are not only fun, but serve as a way for Vathana to preserve the traditional martial arts form. ‘It is not that well-known among young people. Japanese or Korean forms are more recognisable, so I feel it needs attention from the young, and I am happy to support it.’ 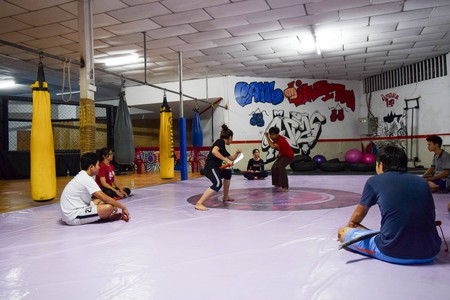 The recent resurgence of the sport has seen more women take Bokator up, although this was previously unheard of | © Peter Ford

As the long-standing government of Prime Minister Hun Sen continues to promote sport as an example of its power and popularity, Bokator is benefiting as well. Last year, it was announced that the army would adopt Bokator in training.

“Before they did Taekwondo, now Bokator. It is good,” says Master Kim with a smile. He also said that plans for grade seven to nine students across the country to receive lessons as part of their sports curriculum would start this year. ‘It has been difficult to train the 300 instructors we need, but the lessons will begin this year.’

Despite the apparent difficulties, the decision by the government was ‘smart,’ according to prominent Cambodian political analyst Ou Virak. ‘It will benefit the public education to include art and sport in school curriculum. I think this certainly has a nationalist touch as Cambodian youths are desperate for identity and pride. I think it will be viewed positively by the people. If the ruling party is putting these efforts to get votes, that’s perfect.’

For Roth Chenda, who has been practising and competing in Bokator events for the last four years, the fact that all students will learn the sport will be great for boosting female participation.

‘Nowadays just six to seven percent of people practicing Bokator are women, it’s such a small amount. So I really want women in Cambodia to come and practice.’ 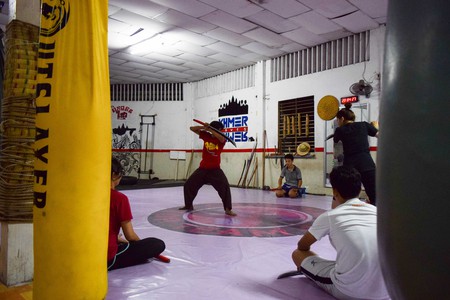 Bokotar uses a variety of weapons alongside it's focus on metal fortitude. | © Peter Ford

As with Vathana, health and physical safety were what first attracted her to the martial art, while a desire to carry on Master Kim’s hard work helps to motivate her ongoing training. ‘I want to be a person that can help to keep alive our national pastimes and culture.’

For Master Kim, he has his sights on Bokator gaining UNESCO Intangible Cultural Heritage status. While Cambodian traditional dance and music has been granted the status, Bokator is still waiting.

‘It is the most important thing. We want Bokator for all. It is our heritage, and hopefully this will be recognised by UNESCO, maybe by 2018,’ he explains excitedly. ‘If UNESCO accepts, all of Cambodia’s 10,000 temples will bang their ceremonial drums in praise.’