Cambodian architect Vann Molyvann has shaped New Khmer Architecture through his works in Phnom Penh. Having been the site of significant historical movements, some of Molyvann’s buildings are deserving of World Heritage Site status, but are currently under the protection of citizens alone. 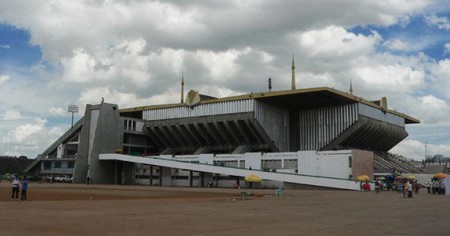 In 2013, architect and former Head of Public Works Vann Molyvann told The Phnom Penh Post that there was ‘no hope left’ for his buildings. Paradigms of New Khmer Architecture, Molyvann’s buildings have been responsible for defining Independence-era (or ‘Golden-era’) Cambodian vernacular architecture. Molyvann’s buildings, alongside those of the other New Khmer architects, have either already been destroyed or are currently threatened by the free-market system which renders every plot of land and every structure in Cambodia up for grabs (although UNESCO continues to protect French colonial buildings and the Angkorian temple complex in the north).

‘Architecture must understand clearly about its own use and function. A building isn’t just built for itself, for its own form.’

Upon returning to Cambodia from Paris in 1956, where he studied architecture under Le Corbusier, Molyvann was introduced to the late HM King Sihanouk. A patron of the Arts, Sihanouk quickly elevated Molyvann to Head of Public Works and State Architect, as well as Minister for Education in 1967. Molyvann’s profound awareness of the topography of Phnom Penh allowed him to develop an urban plan, which worked alongside the fluctuations of the Tonle Sap Basin and Mekong River. He aimed to create a ‘ville radieuse’: a city in which nature and the man-made worked in synchronicity.

Molyvann’s architecture is an exercise in balance. Designing for social housing projects, state institutional buildings, universities and entertainment complexes, Molyvann reworked the principles of traditional Khmer architecture (formally a rural form of architecture) for city use. His knowledge of the Khmer people, their traditions and their daily rituals, is as much of a tool in his work as the techniques he studied under Le Corbusier.

With the rise to power of the Khmer Rouge Regime in 1975, Molyvann’s patron Sihanouk fled the country, and the city of Phnom Penh was emptied. Molyvann’s National Sports Complex (better known as the Olympic Stadium) was repurposed as a collection point for citizens who were to be moved to the countryside. Molyvann returned to Cambodia for a second time in 1991, 11 years after the civil war ended, having relocated to Switzerland with his family prior to the Khmer Rouge takeover, and resumed his work under various official guises.

Molyvann’s subsequent fall from favor is testament to the paranoia of the Cambodian People’s Party government, which has been in power for three decades. In 2001 Molyvann was ousted from the APSARA Authority – an organisation dedicated to the protection of the Angkor temple complex – and is now known to be an outspoken critic of the government under Hun Sen.‘There is no hope left for my buildings. I believe most of them will go.’

Since the beginning of the civil war, several of Molyvann’s buildings have been destroyed or ‘restored’ beyond recognition. Some however, continue to hold their foundations in spite of overwhelming development occurring in the city. Small organisations and initiatives (Khmer Architecture Tours, The Vann Molyvann Project, Reyum among them) have begun documenting the buildings’ histories in an effort to raise awareness of their endangered status as well as to encourage the revival of a contemporary vernacular architecture in Cambodia, a country now defined as much by foreign investment and copycat building-design as it is by heritage of climate and culture specific techniques.The following is a list of Vann Molyvann projects, which can be visited today. 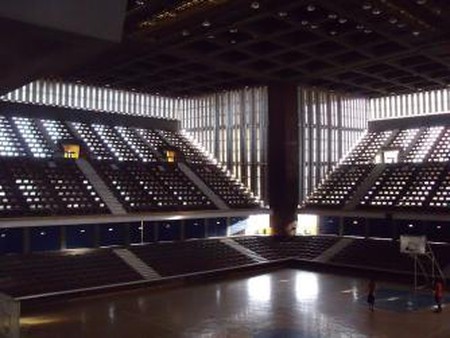 In keeping with Molyvann’s idea of resisting ‘architectural lies’, the aspect of the National Sports Complex is considerably more industrial than that of the protected colonial buildings, being made of poured concrete. The ‘mushroom roof’ and stadium seating are ventilation points for the indoor courts and viaducts were built into the complex to catch and reuse rainwater for facilities. Some features, such as the viaducts, are not working currently.

During the Khmer Rouge Regime, the National Sports Complex was put to use as a collection point. Citizens of Phnom Penh were gathered into the stadium, herded into transport and moved to the countryside. The agricultural revolution imagined by Pol Pot and his government demanded the evacuation of the city for forced labor on farms, where many died due to exhaustion or execution. Since 1975, the stadium has been the execution site of Lon Nol’s Khmer Republic government, the host of Khmer Rouge military parades, a site for refugees returning home from the labor farms and of commemorative parades in 2013, celebrating the fall of Pol Pot’s regime on 7th January 1979.

Although Molyvann deliberately planned the surrounding lakes for practical purposes, including the prevention of major flooding in the city, they have been sold to private companies and are almost entirely filled in for the purpose of building on top of. The National Sports Complex itself is owned by a Taiwanese company, and underwent restoration work in 2012.

Built in the so-called ‘modern baroque’ style, the Institute of Foreign Languages utilizes the inherited techniques for ventilation and natural lighting used in traditional Khmer homes, whilst being an innovative example of New Khmer aesthetic. The individually designed yet interconnected buildings are made up of solids and cavities, geometric shapes, which define the aesthetic and practical nature of the Institute as a whole.

The French Library Building pays homage to the palm leaf hat, a staple item of Khmer dress, which provides both shade and breeze in the heat of the day. Not only is the Library a functional and visual reconstruction of the palm leaf hat, it is also an embodiment of Molyvann’s architectural ideal: the structure is integral to the appearance of the building. Columns are the ribs of the building, which allow air to circulate whilst being a support structure and source of protection from the sun.

Lecture halls are visual harbingers of the Star Wars AT-ATs. Their stance above ground and the ventilation spaces beneath seats allows air to flow into the building from four sides. The Main Building and classrooms have tessellated roofs for the same reason. Since completion in 1972, classrooms have been added into the Main Building, blocking corridors that opened out of the building, providing circulation through corridors and into the triple-storey hallway. 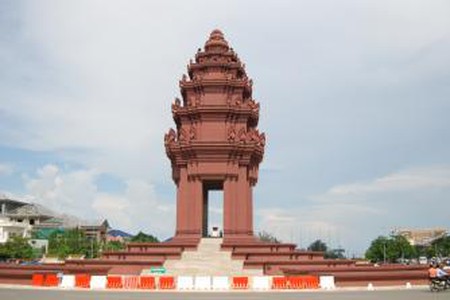 Probably the best known of Molyvann’s works is the Independence Monument. Sihanouk commissioned the monument mid-1950 following the liberation of Cambodia from French protectorate rule, as a celebration of independent Khmer culture.

Surrounded by gardens and adorned with khbach (traditional Khmer ornamentation), the Independence Monument was an attempt to reach into the grand past of Cambodia and simultaneously celebrate the present regaining of freedom from foreign rule. It was the tallest structure in Phnom Penh on the day of its completion and would have been a feature in Sihanouk and Molyvann’s ‘garden city’.

The Independence Monument plays an organisational role in a city without an urban development plan. Positioned in line with Wat Phnom, the Independence Monument and the Wat are connected by Norodom Boulevard, where official parades were held. Now, the monument is the center of an intersection for some of the main roads in the city, and the paved land around it circular, so that the monument might act as a roundabout for traffic.

Amongst the Chinese-style buildings of tradesmen, the cheap bars and hotels, which make up a large proportion of Sihanoukville’s architecture, stands the Church of St Michel. The church was constructed in 1960 for the local Catholic community, the majority of who were French, and inaugurated in 1962. As with the Institute of Foreign Language’s French Library, Molyvann’s design borrowed from the everyday things used by the local community, and utilized similar principles of capturing light and air in order to create a habitable space. The church is a boat, with the walls leaning into each other to create a sail. The sides are punctured by small holes, capturing air blowing in from the coast.

Besides the design, the church is remarkable for its history. Of 72 churches in Cambodia, only two survived the Khmer Rouge Regime, which declaimed religion and faith in anything but the regime as immoral. Since churches were perceived as symbols of two separate ideological enemies – religion and the capitalist bourgeois West – they were objects sought out for destruction rather than repurposing, like the buildings of Hindu and Buddhist faiths. The Church of St Michel, along with the Carmelite Chapel in Phnom Penh, was unique in terms of its fate as a jail and animal shed.

Following the Vietnamese victory over the Khmer Rouge Regime, the Church of St Michel became a storage building, and would continue to be used as such until the UN administration of 1992-1993, when it regained its original status as a place of worship.

Unique among the buildings listed here, The Church of St Michel has been left relatively untouched in spite of the abrupt changes in its use since its inauguration.

Molyvann’s family home is simultaneously an exemplar and a contradiction of his other works and defining philosophy. It was completed in 1966, making it one of the earliest of his buildings. The design utilized Le Corbusier’s Modulor scale; an anthropometric scale of proportions which Molyvann favored in many of his other works. Unlike his other buildings, the poured concrete structure is covered with red brick; an ‘architectural lie’ in his terms.

However, the building deserves to be held up as a structure which creates space rather than compartmentalizes it: its parabolic curved double-layered roof inspired the Battambang Public Works Office, and provides shelter, ventilation and light for the entire house. Calling the designing of his home ‘a chance for me to play’, Molyvann worked out and realized some of the key features of his later designs in experimenting with his private space.

The evacuation of the city meant that the house was abandoned for some time before Molyvann rediscovered it in 1991 with all the furniture missing. His wife’s water skis were left behind. In early 2013, Molyvann offered the first and second floors of his house for rental, recommending them as exhibition and residential spaces. Molyvann and his family continue to live on the ground floor.