A Guide to Phnom Penh's Royal Palace and Silver Pagoda 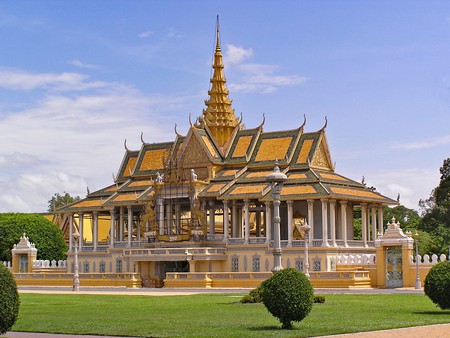 Cambodia’s Royal Palace and adjacent Silver Pagoda offer intriguing insight into Cambodia’s past and present. Sprinkled with history, the beautifully manicured grounds and ornate buildings also offer a reprieve from the hustle and bustle of surrounding capital life – making a trip to the Royal Place a must on every visitor’s itinerary.

Home to Cambodia’s official royal residence, the grounds of Phnom Penh’s Royal Palace and Silver Pagoda are awash with regal structures, intimate temples, collections of gifts from foreign leaders and murals that paint a picture of the country’s past.

Identified by the iconic high yellow walls that shelter the site, the Royal Palace and Silver Pagoda are one of the most popular tourist attractions in the city. Locals like to bask in its beauty every day – flocking to the small patch of grass that sits in the shadows of the palace’s Moonlight Pavilion to feed the birds, enjoy snacks or place offerings. 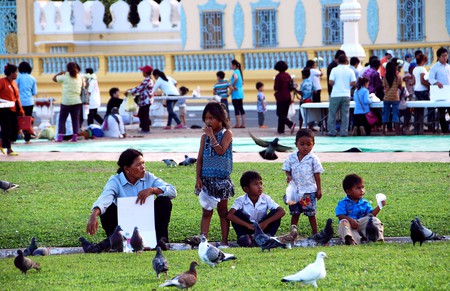 Families flock to the park outside the Royal Palace on Riverside to feed the birds. | © Marissa Carruthers

History of the Royal Palace and Silver Pagoda

Phnom Penh hasn’t always been the capital of Cambodia. In fact, in the country’s lengthy history it’s only held the title for a relatively short snippet of time.

The title of capital previously went to Oudong, which sits about 40km from Phnom Penh in the northwest of Kampong Speu province. The small city, which sat atop a hill (and can be visited today) was home to the royal residence and stood as capital for more than 250 years – until then-King Norodom relocated it to Phnom Penh in 1865.

He recruited the skills of architect Neak Okhna Tepnimith Mak to design him palatial grounds that were made of marble, gold and other precious stones literally fit for a king, with construction carried out by the French Protectorate in 1866. The city was officially inaugurated as the capital the same year. 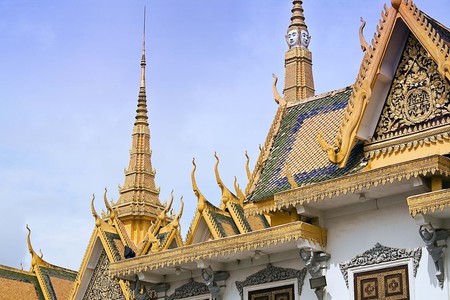 During the next few years, several buildings were added – and demolished, including the original Chanchhaya Pavilion and ThroneHall – in a bid to modernise the grounds. In 1871, the Royal Court became a permanent fixture, with the palace’s iconic walls added in 1873. The Napoleon Pavilion was gifted to the royal family by France in 1876 and remains today.

Eager to leave his mark on the residence, King Sisowath made various changes during his reign from 1904 – 1927. He added Phochani Hall and went on to replace and expand Chanchhaya Pavilion and the Throne Hall.

In the 1930s, King Monivong added the Royal Chapel and demolished and replaced the former Royal Residence with Khemarin Palace, which serves as the monarchy’s official home today. Note, if the blue royal flag is flying it means King Sihamoni is at home.

Under King Sihanouk in the 1950s, Villa Kantha Bopha was added to host guests and Damnak Chan was built to house the High Council of the Throne.

Large parts of the sprawling grounds and formal gardens are open to the public, featuring artistic topiary, fanned palmyra, colourful bougainvillaea and Parisian-inspired paths. However, it still remains the official royal residence, so the areas devoted to royal living are closed to visitors.

There are several entrances to the palace, with the eastern Victory Gate reserved for royalty and VIPs, granting direct access to the Throne Hall. The northern gate, or funeral gate, is only opened after the death of a monarch. In February 2013, the late King Norodom Sihanouk’s body was brought out of this gate to begin the six-kilometre procession through the capital. Cambodians flocked from across the country to pay their respects to the much-revered king. The capital’s streets were lined with mourners dressed in black and white.

The western gate is referred to as the executing gate and was used to bring prisoners out of the palace to be killed in front of the palace. The southern gate is the ‘commoners’ entrance’, and is how the public reaches the Silver Pagoda.

Buildings that are open to the public include the golden-spired Throne Hall, which is painted yellow to symbolise Buddhism – the main religion in Cambodia – and white to represent Hinduism, the dominant religion during Angkorian times. There are five doors to the front of the hall, with the central one reserved for royalty.

The grand golden thrones that sit inside are only used for coronations. The front throne is reserved for the king, with the queen sitting on the rear seat. Hers is taller and built on a golden stage with three stairways – one for the queen herself and the other two for the Brahmin priests who oversee the queen during the ceremony.

To the right of the hall sits a resting room that was used by royalty to relax, with royal sermons and performances held to the front of the pavilion. The king’s residence can be seen from here, with the royal guesthouse also in view.

A small building to the left of the Throne Hall houses a collection of outfits imitating the attire King Sihamoni wore for his coronation on October 14, 2004. Nearby sits the Napoleon Pavilion, an unusual structure in contrast to the traditional Khmer architecture it is surrounded by. Made almost entirely of cast-iron, it was constructed in Egypt and sent to Cambodia as a present from Napoleon III.

The Silver Pagoda is an impressively ornate structure that is also known as Wat Preah Keo, or ‘Temple of the Emerald Buddha’. Originally built as a wooden construction in 1892 under King Norodom, it was rebuilt in its current state in 1962, dripping with silver and jewels,. It is one of Cambodia’s only temples to survive under the Khmer Rouge. However, half of its contents were pillaged or destroyed during the Vietnamese invasion and years of turmoil that followed.

Despite this dark chapter in the country’s history, the pagoda’s extravagance still nestles in every nook and cranny. The floor is covered with five tonnes of silver spread across more than 5,000 tiles. The staircase leading to the pagoda is made of Italian marble, with the temple home to a life-sized gold Buddha dripping with 2,086 diamonds. The largest is said to weigh a hefty 25 carats.

Nods to Cambodia’s rich culture can be found inside the pagoda. The walls are lined with golden Buddhas, ancient art and traditional masks used in many classical dances. Gifts from various heads of states, such as statues, can also be found inside the building.