The History of Cambodia's Killing Fields

During the Khmer Rouge reign, from 1975 to 1979, an estimated 1.7 to 2.5 million Cambodians died through execution, starvation or disease. This was almost a quarter of the country’s population. Killing fields dot the country of Cambodia, with more than 20,000 mass grave sites containing more than 1.38 million bodies according to the Documentation Centre of Cambodia (DC-Cam). The largest of the killing fields was Choeung Ek, which sits on the outskirts of Phnom Penh and today serves as a monument to all those who died – and survived. It also serves as an educational tool to ensure history never repeats itself. 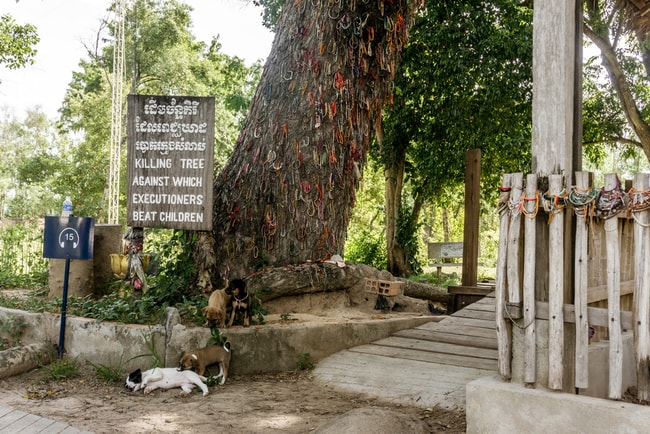 One of the darkest times in modern day history took place in Cambodia between 1975 and 1979, when the Pol Pot-led Khmer Rouge regime ruled Cambodia. Promising the country peace after years of civil war and secret bombing campaigns from America, who were embattled in war with Vietnam, Cambodians flocked onto the streets to welcome soldiers during the fall of Phnom Penh on April 17, 1975.

However, the promised peace never came, and residents were immediately rounded up and sent to the countryside as part of the communist regime’s plans to create an agrarian society. Personal possessions were confiscated, money abolished, family ties severed and the almighty Angkar set the brutal laws, which saw the population sent to work the land under appalling conditions.

Toul Sleng – S-21 Genocide Museum in Phnom Penh – was the main political prison, where suspected enemies of Angkar were sent. As Pol Pot and the top commanders’ paranoia spiralled so did the number of Cambodians detained at S-21. Once inside, prisoners were either tortured to death or sent to nearby Choeung Ek for “re-education” – execution. An estimated 12,273 were detained at S-21, with only seven known survivors. 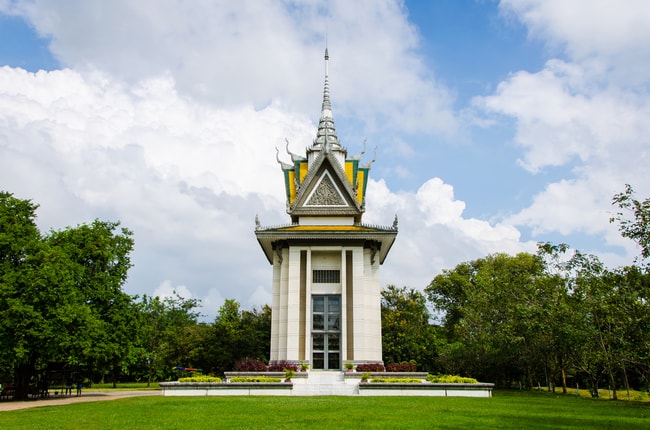 Those sent to Choeung Ek made the 17-kilometre journey crammed into the back of trucks. Once there, many were blindfolded and, not wanting to waste bullets, soldiers smashed spades into their heads before pushing them in pits containing the dead bodies of thousands. It is thought about 17,000 men, women and children were executed at the site.

In 1980, the remains of almost 9,000 people were exhumed from the mass graves that litter the former orchard. Many of these skulls now sit in a memorial Stupa that was created in 1988 and forms the site’s centrepiece, serving as a stark reminder about the bitter past and to ensure the lives lost are never forgotten.

It’s hard to imagine the former longan orchard is a place that harbours such horror. Birdsong rises from the trees, the gentle breeze wafts through the manicured fields, flowers are in bloom, shimmering paddies surround the site and life goes on. 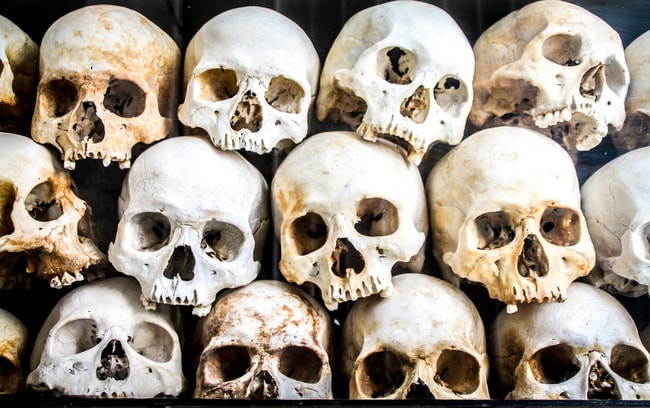 However, this isn’t any orchard in Cambodia; it acted as the Khmer Rouge’s main killing field and horrific reminders can be found at every step, making a visit to Choeung Ek a sobering one. Comprised of 129 communal graves, 43 have been left untouched. The many bone fragments, teeth and scraps of bloodied cloth retrieved sit in glass containers for visitors to see.

An audio tour guides visitors around the site with compelling stories from survivors, guards and executioners. A visit to the Killing Fields is harrowing, emotional and draining, however, it offers a compelling insight into a fraction of the atrocities that took place across the country under the genocidal regime.

Choeung Ek was transformed into a memorial site and tourist attraction in a bid to educate Cambodians – and the world – about what happened, while serving as a way to commemorate those who died. On May 9 every year, a memorial ceremony is held at the Killing Fields. 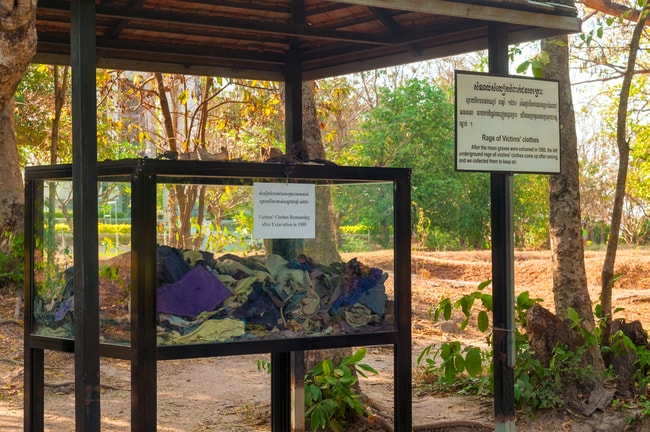 Each year, Khmer Rouge survivors and their relatives, officials, students from across Phnom Penh and other Cambodians gather at the Buddhist Stupor to remember the dead.

The Killing Fields as a tourist site

While remembering the past – and learning from it – is essential, there is a global debate raging about whether profiteering off dark tourism sites such as this is educational or exploitative.

Either way, visitors are urged to be respectful during their visit and remember where they are. Dress appropriately, don’t snap disrespectful selfies in front of skulls or bones and don’t smoke, drink or eat while touring the site. 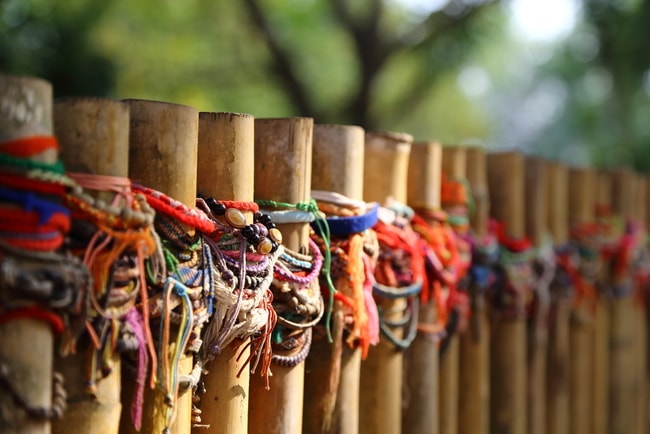 Choeung Ek sits about 17 kilometres south of the capital, Phnom Penh. A tuk tuk will take about 40 minutes from central Phnom Penh and costs about $15-20. Entry is $5 ($3 for 10- to 18-year-olds), which includes the audio tour in several languages.

Phnom Penh Hop On Hop Off offers shuttle-bus tours that pick guests up from their hotel.

Several small eateries and stalls selling drinks and snacks can be found at the entrance.