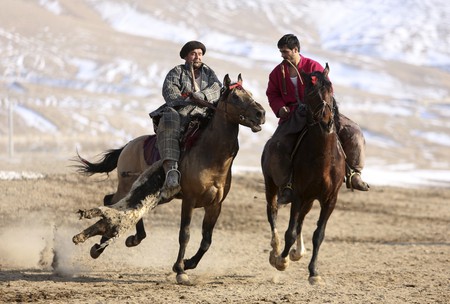 Played in one form or another for more than 600 years, Afghanistan’s national sport, buzkashi, is alarmingly fast and extremely physical. That, however, is not what grabs the attention—it’s the dead goat in the middle.

This traditional game is played on horseback, similar to polo, but instead of a ball, it’s a headless goat carcass that players are maneuvering around the field of play. The word buzkashi (pronounced ‘booz-ka-shee’) literally translates as ‘goat pulling’ in Persian. While it is the national sport of Afghanistan, varieties of the game have migrated across central Asia and has been adopted by a number of different ethnic groups including the Kazakhs, Tajiks, and Kyrgyz people. 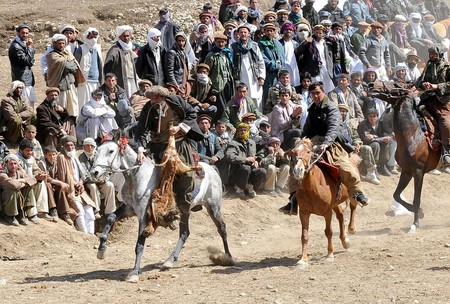 A chapandaz, or Buzkashi player, rides toward the target circle to score during a Buzkashi game in Paryan District. | © ResoluteSupportMedia/flickr.com

The use of a goat carcass does, amid first impressions, seem alarming and barbaric, but ultimately requires a degree of perspective. The goat (or sometimes a calf) is decapitated and disembowelled, its legs are severed at the knees and then the body is soaked in water for 24 hours to harden the flesh and toughen the hide before being used in the game.

In regard to the use of a dead animal in sport, there will always be some who object. There is a distinction to be made, however, with animals used in buzkashi and something like bull fighting, for example. The goat is slaughtered a day before it’s used, and is roasted after the match has finished. While an animal is killed for the game, it’s not the process of killing that is the sport itself.

Wholesome American football fans have thrown around a ‘pigskin’ for decades, and baseballs are traditionally covered in cowhide. While a ‘pigskin’ is no longer actually used in professional football, pig bladders were used to inflate footballs in the same way they were used for traditional forms of soccer across British towns for centuries. 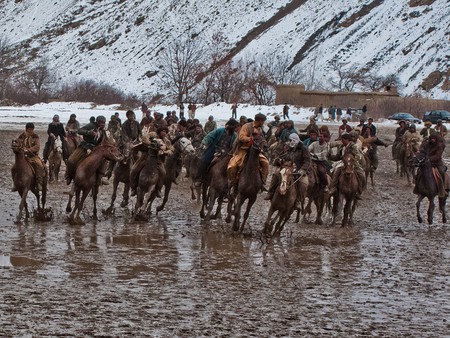 One theory for the game’s origins is based on Afghan tribes galloping on horseback to steal a rival tribe’s goats from their flock. That would also lend itself to the physicality – and sometimes violence – that makes up a large part of the game.

Riders usually wear heavy clothing and head protection to guard themselves against other players’ whips and boots. Competitors that play in the former Soviet Union often wear salvaged Soviet tank helmets for protection. The sport also requires a huge amount of agility and horsemanship, so the boots worn usually have high heels that lock into the saddle to help the rider lean on the side while trying to pick up the goat from the floor.

The spread of the game has led to it being played among Kyrgyz, Turkmens, Pashtuns, Uyghurs, Hazaras, Kazakhs, Uzbeks and Tajiks, in central Asia. It has also reached as far west as Turkey and as far east as China, where horseback buzkashi is played, as well as riding yaks. Today, the game exists in two main forms: Tudabarai and Qarajai. While players must carry the carcass to their opposition’s end of the field and place it in the ‘Circle of Justice’ in Qarajai, the simpler Tudabarai involves grabbing the goat and moving in any direction until clear of other players. 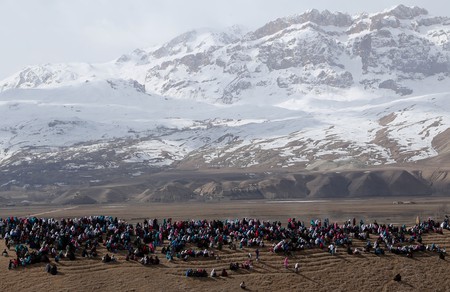 Dr. Whitney Azoy, an anthropologist and the author of Buzkashi: Game and Power in Afghanistan,has likened the sport to a metaphor for Afghanistan’s recent history fighting the Soviets, as well as the way in which rural power brokers and rich horse owners – the Khans – have used the game to enhance, and exert, their power and reputation.

‘The key role in any buzkashi is that of overall sponsor: the man who announces the game, invites the guests, organises the extensive hospitality, supplies the vast sums of prize money, and – acid test –proves himself able to restrict three or four days of equestrian mayhem to the actual game itself,’ Azoy argues. ‘Significantly, this overall sponsor is seldom himself on horseback. Rather he sits to one side, powerful in apparent repose. A nod here, a raised finger there, and his will is done.

‘The man who can manage a buzkashi successfully gains enormous prestige. People speak for years of his achievement. Henceforth he is known as someone who order events, achieve his ends, and impose his purpose on chaos – the sort of man to support in the real world in the hope of concrete spoils. All too often, however, the game boils over into fierce and bloody brawls. The sponsor is thereby disgraced in this public arena.’

Sponsors and the Taliban

The best buzkashi players today have personal sponsors, backed by rich influencers who crave reputation and success. In essence, it’s not far removed from the wealthy oligarchs of professional sports teams buying clubs and franchises, hoovering up the best talent to bring their club success on the pitch and shirt sales off it.

Under Taliban rule, the amount of buzkashi played saw a sharp decline because it was deemed immoral. Since their ousting, the sport’s popularity has once again surged within the nation, with some matches drawing spectators in the thousands.

Animal rights activists will understandably be repulsed by the use of an animal carcass in sport, but the popularity of buzkashi shows no sign of slowing down. For it to be widely accepted across the world, things may have to change, but why would Afghan players care about such (perceived) acceptance? With traditions potentially going as far back as the 11th century, advocates, backers, and fans of buzkashi need not worry about their beloved sport changing anytime soon.