For decades, Zimbabweans were denied the truth about the Great Zimbabwe. An ancient city constructed almost 1000 years ago and long since ruined, Great Zimbabwe was proof that black African culture, far from being inferior to colonial society, was in fact comparable. Anxious to shore up their imperial stranglehold, colonial powers hid the facts about Great Zimbabwe. But today, Zimbabweans are rediscovering their lost heritage at last. 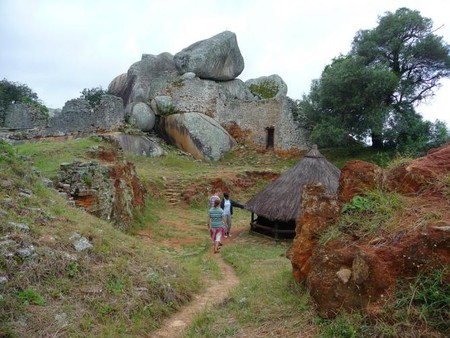 Throughout the Colonial Era it was considered blasphemy to believe that black people were equal to white imperialists. Great Zimbabwe, once an extremely important political and commercial center, and a royal and religious site, gave the lie to colonial mythology. Therefore, historians were forced by the political leaders to write a fictional history to keep the locals ignorant of the ruined city, and the archaeologists away. Pictures were even placed in official guidebooks showing the white people that were allegedly responsible for the building of the site.

Despite these claims, Great Zimbabwe was not the work of white civilizations. The African-made city, built between 1100 and 1450 AD out of granite rock, shows that extremely advanced expertise of masonry would have been required to make the high dry-stone walls. It would have also taken a lot of organisation to get an adequate number of workers together to build the city. This high level of skill needed is one of the main reasons British imperialists refused to believe that it was Africans that created the masterpiece. 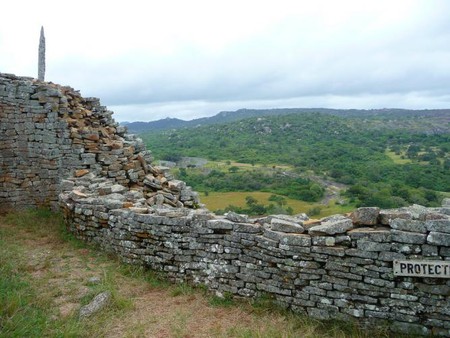 The other justification in the imperialists eyes as to why it could not possibly have been Africans that made Great Zimbabwe, was the fact that this city had played a huge role in international trading. The foreign items discovered during excavations were used as proof that it was international workers that had created the site. But later research showed that the people of Great Zimbabwe were actually trading with countries as far away as China, India and the Gulf and that’s where the ceramics, foreign coins and glassware came from.

Built 1100 kilometers above sea level on the Harare Plateau, the site can be divided into three areas: the Hill Ruins, the Great Enclosure and the Valley Ruins. The Hill Ruins are thought to have been continuously inhabited until the site was abandoned around the year 1450. Home to the acropolis, it is this area that was possibly the royal city, and is also thought to have had a ritual site. Six steatite posts can be seen here each topped with a bird – the bird which is now prominent on Zimbabwe’s national flag. The Great Enclosure is believed to date only until the 14th century and would have been where most of the population lived. The remains of more homes can be seen in the Valley Ruins area too.

Around 18,000 people are estimated to have lived across this 1780 acre site in its prime, making it one of the most populated cities in existence during the medieval period. Evidence suggests that the civilians were farmers and depended on their cattle to provide food and to use as a trading tool both with local miners and faraway lands. A large crucifix can be found on the site too suggesting that missionaries had made it to this civilization while it was still at its most prosperous. 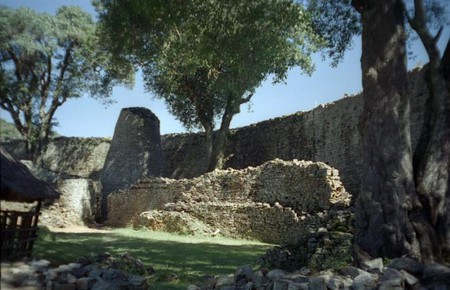 But who were the people who built this advanced, prosperous city? Historians have known since 1905 that it was in fact indigenous Shona-speaking people of Bantu origin that built and lived in Great Zimbabwe. Nobody can be entirely sure why the site was abandoned around 1450, although there are some solid theories in place: due to the huge population it is possible that deforestation became a problem, as well as lack of fertile land for crops and cattle grazing. Another possibility is that the people moved to a more convenient location to continue their international trading pursuits. The civilians appear to have divided in their routes, with some heading north to form the kingdom of Mutapa and others heading south to establish the Torwa State. Yet there is no sign of a war that would explain the abandonment or the decision to split between two new destinations.

This history was largely unreported until Zimbabwe gained independence from the United Kingdom in 1980. Each European and British visitor to the site came up with their own explanation for who built it. The Portuguese, Arabs and Chinese were all considered, even biblical characters were suggested; the only possible builders not mentioned were Africans themselves. 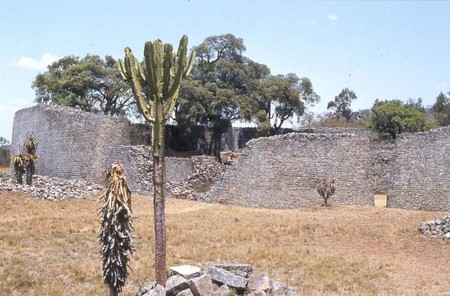 That was until 1905, when British-born archaeologist David Randall-MacIver said that the site was ‘unquestionably African in every detail’. His comment caused outrage among imperialists, and archeologists were then banned from visiting the site for the following 24 years to prevent anyone else uncovering the truth. In 1929 another British archeologist carried out an excavation of the site. Gertrude Caton-Thompson and her team backed up Randall’s findings that the founders of the site were indeed African. Her opinion, too, was ignored.

From 1965 to 1980 the heritage of Great Zimbabwe was hidden even further when Ian Smith created a white minority government which he headed as Prime Minister. He ordered for the creation of fictional explanations of the site’s provenance, to prevent anyone from believing that the Africans were responsible for the site. A whole new, fake, history was written around the Great Zimbabwe ruins and presented as the truth.

In 1980 the natives overthrew Smith’s government and the country got a new prime minister, Robert Mugabe, who gave the country the name it still uses today, Zimbabwe, after Great Zimbabwe. The lies of the colonial era were now no more, and the truth behind this great civilization could finally be discovered and celebrated. Whilst many unanswered questions remain about the site and its people, archaeologists are now making headway into understanding the great civilization.

This progress has been expedited by Great Zimbabwe’s elevation to a UNESCO World Heritage Site in 1986, allowing it to finally receive the protection and preservation befitting such a powerful historic site. Despite being Africa’s largest pre-colonial construction site south of the Sahara, visitor numbers have remained quite low. This is great for the preservation of the site, because damage has already been caused by even the small number of previous visitors climbing on the stone walls and taking away pieces of the site as souvenirs. With stricter visitor restrictions in place, hopefully more care will be taken to preserve the site, and consequently more visitors will be able to enjoy the rich history and beauty that the site offers for years to come.

It’s possible to hire a guide and visit the site today. A local guide will give you a tour full of anecdotes, myths, legends and history, bringing this incredible site to life after decades of neglect and denial.