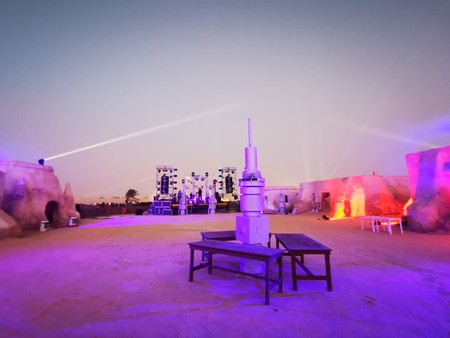 Les Dunes Electroniques is back following a three-year hiatus. The two-day music festival, which ran from 2014 to 2015, takes place on the set of the Star Wars film franchise in the Tunisian desert.

As a plethora of spotlights and sound systems in a remote part of Tunisia fire up to signal the start of Les Dunes Electroniques, a dramatic sandstorm descends, sending partygoers scurrying for cover. Unlike other music festivals, however, shelter comes in the unlikely form of sets from arguably the biggest film franchise of all time. 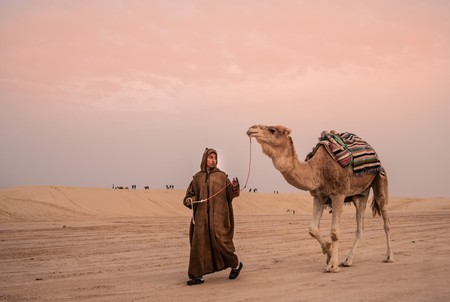 The journey to get here takes you to Ong Jmal (‘neck of the camel’), a region in Nefta, close to the southern Tunisian town of Tozeur. The name is derived from a striking rock formation that apparently resembles the front half of a camel, and it’s certainly an odd location for a music festival. Surrounded by miles of desert, vast salt flats and countless sand dunes, this isolated location is also close to the border with Algeria. A single tarmac road winds through the otherwise untouched sands as a familiar sight comes into view.

Hosted at the site of Mos Espa, the home of Anakin Skywalker in the Star Wars prequel trilogy (1999-2005), the EDM spectacular is back, following safety concerns in the aftermath of the Sousse terror attack in 2015. Tunisian tourism as a whole is slowly recovering, and Les Dunes is a high-profile symbol of the aim to bring international focus onto the positive aspects of the country.

Star Wars’ southern Tunisian locations have remained popular throughout the intervening years while the festival has been on a break. Every day, scores of tourists make the potentially arduous journey to the places George Lucas handpicked in the late 1970s to kick-start his billion-dollar idea. However, these are unlike any other film locations, as visitors can explore at their leisure and get up close to a part of cinematic history.

In 1998, Lucas and his crew returned to Tunisia to erect the fibreglass and wood structures that you can now find here, created for the production of The Phantom Menace, that are slowly being encroached upon by the Sahara.

According to caretakers of the Mos Espa site, the massive challenge damaging the area is not the work of humans, but instead is a result of the desertification that is threatening fertile lands and the livelihood of local farmers. The government is working hard to push back the advancement of the sand dunes, which is threatening the Star Wars site. 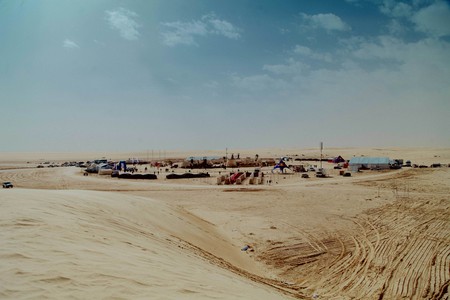 Matthieu Corosine, one of the organisers of Les Dunes, stands firm in the face of the sandstorm, seeing it dissipate as quickly as it arrived. The windy weather conditions occur throughout the year, with the abandoned film set once on the verge of being reclaimed entirely by the desert. Active efforts are now being made to preserve it, taking inspiration from other Tunisian Star Wars locations that have been turned into tourist attractions. One such location, Sidi Idriss in Matmata, is even operating as a boutique hotel in an attempt to capitalise on the enduring appeal of the films.

However, Les Dunes Electroniques isn’t about saving Mos Espa, or even just about having a good time. The festival represents something that means a lot more in the wider context of Tunisia’s status on the global stage. “One important thing about this project is that we first started to work on it right after the Arab Spring and the revolution of the Tunisian people. We didn’t do it on purpose, but the festival came right before the proclamation of the new constitution of the country, so Les Dunes Electroniques was a way for all the youth to celebrate the ‘new’ Tunisia,” Corosine says.

Along with his business partner and friend Benoit Geli, he now works on a string of festivals, including Moga in the Moroccan city of Essaouira. Coincidentally, this other North African event also takes place in a location well known by pop-culture fans, as it was used in the filming of Game of Thrones. 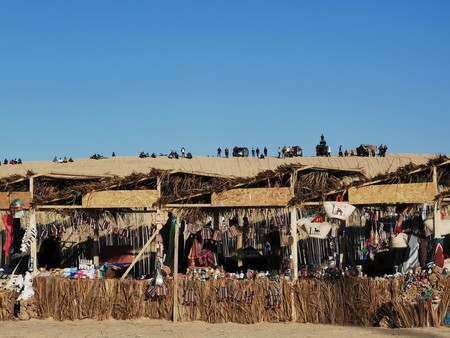 Attendees at Les Dunes come from all walks of life. There are hardcore music fans who follow their favourite DJs around the world, local partygoers from the more affluent side of Tunisian society and even a few loyal members of the Rebel Alliance (if the capes, masks and lightsabers are anything to go by). Even the dark side is represented, as a handful of social-media influencers also make it onto the site.

The remoteness of the location is both its biggest appeal and most problematic factor. “What is special about Les Dunes Electroniques is the desert, seven hours away by car from the capital, surrounded by sand dunes, with no electricity, no water, nothing. In terms of production, you have to build everything from scratch and think about every single detail, because if you forget something while in the desert, there is no second chance, nor a guy you can call last minute to help you out,” Corosine explains. 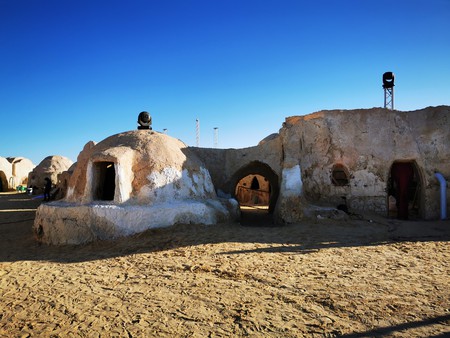 The music might not be for everyone, but with a number of local artists playing tunes that suit the setting perfectly, there is a real sense of cohesion in bringing Star Wars, the Sahara and songs together here.

Much to the relief of everyone involved with the festival, the 30-hour party passes off without a major hitch. The location bursts to life in the evenings as the sun goes down and those that stay the course are treated to exhilarating sunrises that feel otherworldly. Wandering around the homes of such iconic film characters is a remarkable experience only heightened by the contrasting light (both natural and artificial) that illuminates the structures. 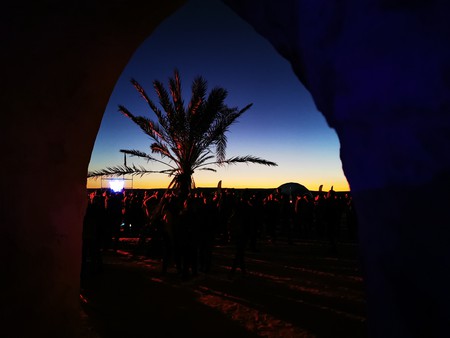 For film fans, Les Dunes offers a unique chance to visit the set from an all-time classic, but for Tunisia it means a whole lot more. The message is clear: the country is open for business and is able to put on big events like this safely. Plans are already underway for the next edition of the festival, and improvements in the transport infrastructure of the surrounding areas are going to make getting here a whole lot easier.