The Dinka People Of South Sudan

Following years of civil war, South Sudan proclaimed independence from the north in July 2011. For the Dinka people, who make up the majority of the country’s population, independence brings new hope of escaping the violence which has blighted their country for decades. 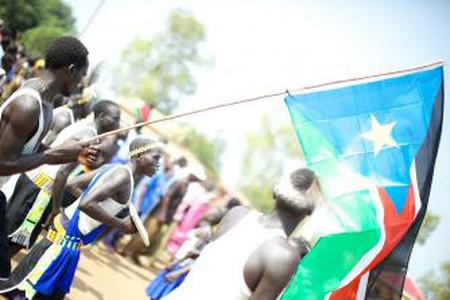 The Dinka are a pastoral-agricultural people that make up the largest ethnic group in South Sudan. Unlike the heavily Arabized Islamic population of northern Sudan, the indigenous African population in the south of the country has maintained animist religious beliefs that were incorporated into the Christianity established by 19th century missionaries. The religious and cultural differences between the north and south of the country, exacerbated by tribal disputes and politics, led to conflicts that persisted and intensified throughout the twentieth century and which eventually led to total civil war in 1955. The situation has created one of the most war-torn nations in the world, with hostilities continuing almost uninterrupted ever since. In July 2011, South Sudan seceded after a referendum, although the infrastructure and economy will take years to recover. In both the Islamic north and the Christian south, internal strife persists.

One of the most haunting aspects of the ongoing conflict was the phenomena of ‘The Lost Boys’; tens of thousands of young men displaced by warfare, journeying by foot across the country to refugee camps, from which many were taken to America and resettled by aid organisations. The phenomenon has been the subject of a number of films and books. God Grew Tired of Us, which follows three Sudanese boys taken to America, won the Grand Jury Prize at the Sundance Film Festival in 2006. John Bul Dau, one of the boys featured, also wrote a memoir of the same name, and has since started the John Dau Foundation to improve healthcare in South Sudan.

Ger Duany was another Dinka refugee who managed to escape to America and became an actor and model. He found fame for his part in philosophical comedy I Heart Huckabees, which also mentions the Sudanese war. The Dinka People are among the tallest African ethnic group, and several Dinka have achieved success as models or athletes. South Sudanese British supermodel Alek Wek has written a book, Alek, about her journey from civil war to catwalk. A number of Dinka males have also made it to the NBA, including Manute Bol, who at 7’7 was one of the tallest players to ever compete in the sport. A committed activist for his home country, he reputedly donated most of his earnings (several million dollars) to helping Sudanese refugees. In 2001, he was offered a post as minister for sport in Sudan, but turned down the offer because one of the conditions was converting to Islam. He became embroiled in a political and religious dispute, and was accused of aiding the Christian rebels in the south of the country. He was eventually re-admitted to the States as a religious refugee in 2002.

After decades of oppression and massacres, the Dinka may have a brighter future now that South Sudan has seceded.
By Jon Crabb