Why This Street Artist Paints Elephants Across Cape Town 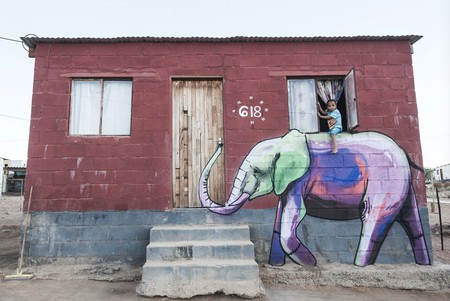 Falko artwork in Garies | © Falko One

Falko One’s iconic graffiti elephants continue to pop up on buildings around South Africa, but many who stop to snap pictures of the quirky pachyderms know little about the man behind the artwork. Those in the know, however, credit him as being an integral part of South Africa’s graffiti scene.

Falko got his start in the world of street art in Cape Town in the late 1980s, before South Africa’s first democratic elections. He was just 16 at the time, and was asked to paint a school wall in the Cape Town township of Mitchell’s Plain. Though most now associate him with his elephant artwork, it took him many more years to make a name for himself. For much of his early career he was bogged down by commercial work and was unable to find time to paint what truly inspired him. 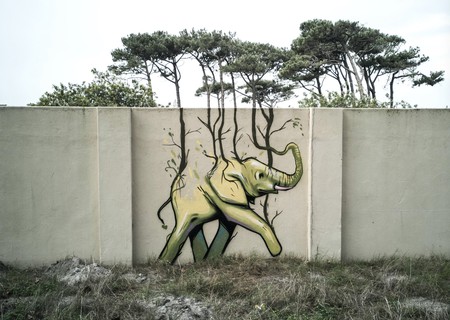 “Me painting colourful elephants was not a ‘light bulb’ moment, but rather a story that spans about 15 years,” says Falko. “I was painting them for fun, but the interest in painting them didn’t last more than one year, because I was always just painting commissioned work.”

This commissioned work required him to paint whatever his clients demanded, and it never involved his elephants. “At the time there was no term or category such as street art,” says Falko, “and traditional hip-hop graffiti was still very much the preferred style of art.”

Although he had been painting for many years, he didn’t have his own identity until 2014, when he had a pivotal experience in Senegal.

“From 2012 until April 2014 I was painting chickens,” says Falko. “I liked painting them because it was a little joke and they have so much value and meaning to us as people. The metaphors are interesting.” 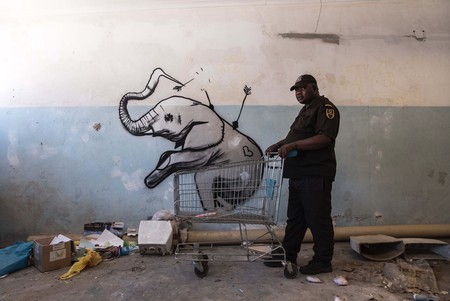 'The Transporter' by Falko One | © Falko One

But in 2014, a community in Dakar forced him to rethink his approach. “The chickens did not go down well with the people at all!” says Falko. “I was stuck in a little village on the outskirts of Dakar, with an angry community who did not like the chickens! And so I painted what I could from memory: an elephant! And that was the beginning of where we are now.”

Though he’s now synonymous with the colourful elephants, Falko prefers to let people interpret them freely.

“I do not like to reveal too much about their meaning; that helps keep the conversation going. But they make me happy, and when I’m happy, I am inspired, and that’s the ticket to their success.”

Falko spends a lot of time moving around the country looking for locations. Much of his artwork finds a platform in remote locations and on unusual canvases such as old dumpsters, broken buildings and on houses in South Africa’s more impoverished communities. Though based in Cape Town, he’ll often venture out of the main urban areas and look for locations up to two hours of town. 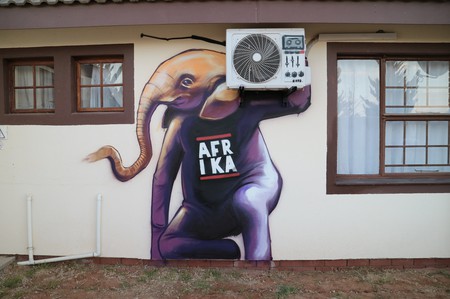 'I Can't Live Without my Radio' by Falko One | © Falko One

Often, a specific space might not capture his imagination immediately, and so it’s common for him to just take a few photographs and return home to ponder over what he discovered.

“Once I drove back from Durban to Cape Town,” says Falko. “In the Eastern Cape I saw a space I really wanted to do, but did not have the time to stop to do it. It really bothered me that it was perfect for the idea I had.”

And so, one week later, he drove all the way back to the location just to paint it.

“I love travelling around the country,” he says. “There are so many little towns where nothing happens. Nothing! Companies do not invest in any form of advertising or promotional activities there, because there are too few people for their return on money spent on marketing.” 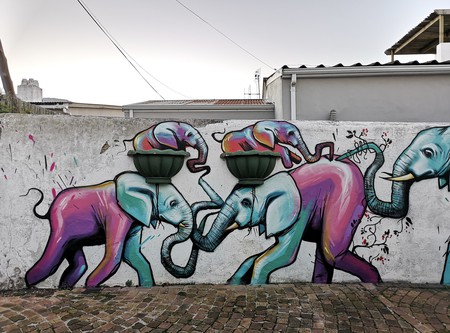 More elephants by Falko One | © Falko One

When Falko arrives in a new town to paint his murals, he often has to spend some time diplomatically dodging requests from communities.

“Favourite rugby and soccer team logos, Bob Marley and children’s faces” all feature prominently on the list, according to Falko. But once he finally gets permission for a space to paint his elephants, the community usually buys in immediately.

“Once it’s done, the debates about the artwork are always lighthearted,” says Falko. “They’re sprinkled with joking debates over what the meaning is. And because I cannot possibly paint everyone’s homes in an area, it frequently opens the door for jealous banter amongst the community.”

In this way, Falko’s colourful, uplifting artworks helps to transform and reinvigorate the villages, towns and cities where where he paints them.

“A resident in Pella, a small isolated town in South Africa’s Northern Cape, said that it was the best thing that has happened in the town for 100 years,” he laughs. “Its sounds a bit much, but I’ll take it!”