These Cows in South Africa Are Very Photogenic 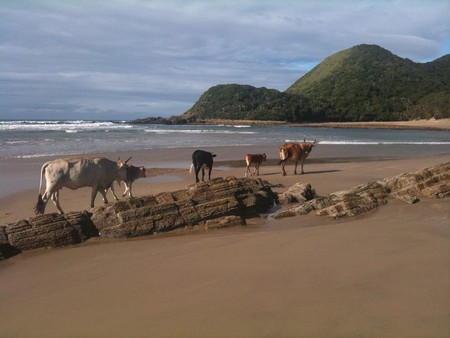 Meeting a long-horned cow on the beach is not usually an everyday occurrence, except if you happen to be on the Transkei Wild Coast that is. Each day these beautiful beasties make their way down the hills from the villages above to chill out and literally chew the cud. Why – well no one really knows. What has been observed is that these cows seem to enjoy the beach and all the attention they get from visitors. Placid cows pose for photographs without a worry in the world, making them some of the most photographed in South Africa.

How the cows and coastline met

A large piece of the Eastern Cape coastline running from just outside of East London and along to Port St Johns was once a homeland enclave, cut off from the rest of South Africa by the then Apartheid government. The area was called the Transkei and many black South Africans either lived there or were forced to do so.

One of the big five of the Transkei, the Nguni Cow 🐂💚

Today this majestic stretch of pristine beach and tropical vegetation is still pretty much untouched by modernity, with some rural villagers opting to stay in the former homeland. It is these villagers who own the cows in question, that make up a substantial part of the rural economy. Cows are pricey commodities among many of South Africa’s ethnic groups and are used for lobola (paying for a bride) and the more a family possesses, the higher their status in the community. 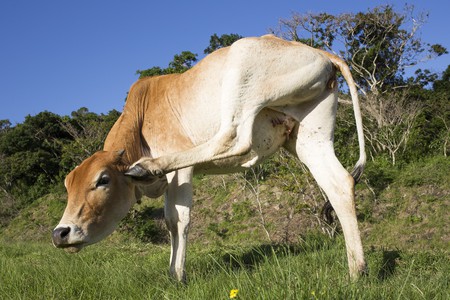 Having a scratch | © Michael Mayer/Flickr

At night these cattle are kept in the family kraal for protection against predators and theft, but come dawn they are released and left to graze the surrounding vegetation. Around midday the cows return to their owners to be milked and after that the beach calls. When the heat peaks in the afternoon the satiated cows make their way down to the sand. 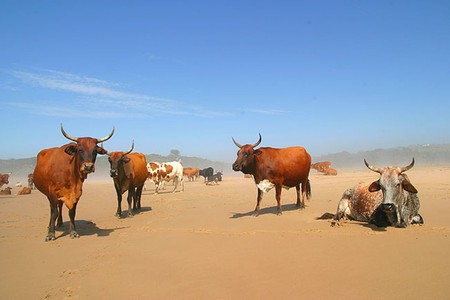 Do they enjoy sunbathing?

Although there is no firm, hard evidence as to why the cows choose the beach as a resting spot, it does genuinely appear as if they enjoy it, with the cool, soft sand under their full bellies and the fresh breeze blowing off the ocean. Their behaviour becomes more animated and young bulls lock horns with each other in playful sparring matches. On very hot days some even take a dip, inching into the cold water until it touches the bottom of their abdomens.

The Wild Coast cows rarely mind being photographed at all, and are in fact quite familiar with being approached by enthusiastic photographers. Often they stare straight at the camera lens as if to offer the best shot possible, and stand patiently while images are captured. Some are more familiar than others and approach beach goers inquisitively, as if asking to be photographed.