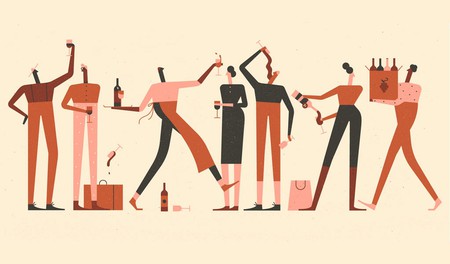 Wine tasting is an essential activity for residents and visitors to Cape Town. You get to sample some of the country’s best wines, in beautiful surrounds, usually for only a fistful of coins. But there are some characters you can’t seem to avoid while you quaff samples your vintage varietal. Here the best, or worst, of them.

You’ll easily spot the wannabe wine snob from a distance. He will be swirling the wine around the glass with confidence – it’s the first trick he learnt while drowning out the teacher’s insights. Then he’ll raise it to the light to check its colour, because apparently that’s important, and then quaff it in that awkward slipping style their wine teacher told them to do, though they’re not quite sure why and they always look a bit self-conscious doing it. They’ll usually make an effort not to finish the wine, so that they can spit some out or empty a bit into those little receptacles on the counter that most paying people treat with disdain. The best amateur wine snobs among them will throw in a noncommittal comment like ‘It’s drinkable’, something about the tannins, or just a ‘Hmm… good on the nose, actually.’

This is the person at the wine tasting who clearly knows what she’s doing. She’ll whip up the glass, swirl it, and quaff it in one fluid movement. She might pause for a fraction of a second, and then know instantly whether it’s worth buying a case of. You might hear quiet a ‘Humph’ or ‘Good…’, followed by some pointed note taking, but unless they’re in a crew, they’ll usually keep the comments to themselves. There’s plenty of pretence in the mix, this is wine tasting after all, but the years of training – or, at the very least, pretending – has lent her an air of credibility.

Dishing up wine to pretentious tasters can get a bit tiresome, so it’s only fair that the person pouring the samples has a few for himself along the way. Some are more adept at hiding this than others – the only indication that your sommelier has had a few too many on the side might be the occasional slur or bloodshot eyes. Others simply couldn’t be bothered, and will happily pour themselves a glass alongside yours as if required by the job description.

The server who really doesn’t give a damn

A close relative to the drunk server, this is the guy who really couldn’t care for the ins and outs of the vineyard’s wines. They’ll answer questions in broad terms, or make up answers so complex that few would ever question them again. These can also be your best friends at wine tastings – get them on your side and they’ll fill your glass way above the tasting limit, and happily pour you another glass of your favourite.

The “I’m just here to get drunk” wine taster

This is the wine taster who likes her wine just a little bit too much, and she’s not afraid to show it. She’ll fork over the fee for a tasting and then proceed to treat it like an all-you-can-drink contest. She’ll look at you with disdain for not finishing off your glass, and politely offer to take care of it for you. And when you’re not looking, she may quietly slide over one of the unfinished glasses on the counter and then feign ignorance about its owner. This wine taster walks a fine line between the rookie and the wannabe snob, except it’ll never once cross her mind to even pretend that she’s there to sample the vineyard’s wine.

The total rookie attends wine tastings because he knows it’s the mature thing to do, but he really doesn’t have a clue what’s going on. He’ll usually down the first tasting in a single sip, and then look around, embarrassed, to see that everyone else is considering theirs carefully. He’ll sit back and wait for comments to arise, and then skilfully agree with the actual wine snob, or at least the wannabe wine snob. He will never venture an opinion of his own, just in case it’s a trick.

The “expensive vintage only” taster

Wine in Cape Town may be competitively priced compared to other countries around the world, but there are still a few estates brave enough to slip some limited edition reserves onto their tasting lists. The “expensive vintage only” taster will know this, and head straight for the most costly varietals. Regardless of whether this wine drinker really likes the inaccessible merlot or the sickly-sweet desert wine, he’ll slide his finger down the tasting list and tap the most expensive: ‘I’ll have a taste of this,’ he’ll say, trying not to raise too many suspicions.

This wine taster can also fall into any of the other categories, but more often than not is the wannabe wine snob or the total rookie. They’ll get so caught up in the moment that the salesperson behind the counter will milk them for everything they’ve got. They’re easy to spot, too – they’re the people stumbling back to the car with a case under each arm, and a look of ‘What have I just done?’ on their faces.