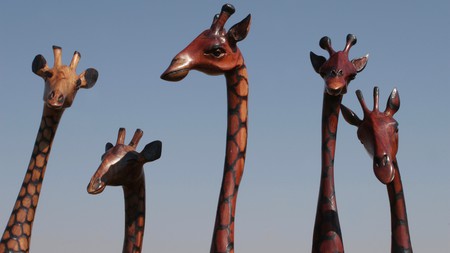 The rich cultural heritage of the Limpopo province is celebrated along the Ribola Art Route, an art tour of little-known corners of South Africa | © namibelephant / Getty Images

A four-hour drive from Johannesburg, Limpopo is home to the world-famous Kruger National Park, the Blouberg mountain range and the Makgabeng Plateau. The province also boasts a rich cultural heritage that is honoured along the Ribola Art Route, an immersive art tour of largely unknown corners of South Africa.

The Ribola Art Route (named after a mountain in the area) is a celebration of Venda and Tsonga cultures. The tour includes several studios and galleries belonging to local artists, who have formed an easy-to-navigate art route for exploring Limpopo. 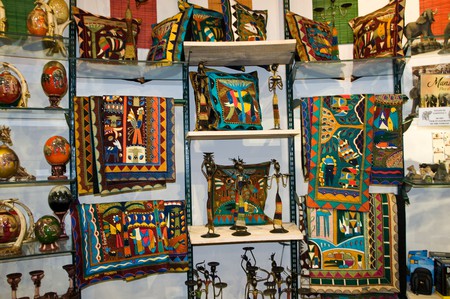 Venda is a former Bantustan (a name given to homelands set up by the South African apartheid government to keep races separate and prevent indigenous people from establishing permanent homes in the more urbanised cities), but the pervasiveness and pride of custom and folklore have remained untouched in this remarkable area.

While it’s best tackled as a road trip, starting in Johannesburg and heading past Polokwane towards Elim, it’s also possible to combine this journey with The Panorama Route: South Africa’s Most Beautiful Road Trip. 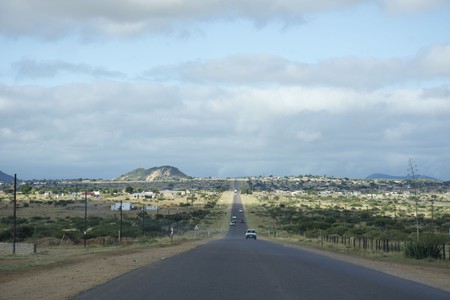 Stories in sculpture around Mbhokota

Once a small missionary village, Elim (which means ‘place of God’) is the entranceway to the Ribola Art Route and the last big town before arriving in Venda. Beyond the shopping mall and the bustling streets lies the village of Mbhokota, a seemingly unlikely headquarters for South African art and the home town of famed South African wood sculptor of the 1980s, Jackson Hlungwani. Hlungwani not only put Limpopo province – and Venda culture – on the map, but his legacy endures in the work of several contemporary sculptors who continue to draw on his inspirational work.

A morning pottery lesson in the Mukondeni Pot Village

The humble pot may not be considered a sculpture by many, but it’s undeniably an art form. This particular Venda clay creation has been traced back several decades to Sarah Munyai, who taught the women of this village to specialise in pot-making and better monetise their craft. Without the modern means of a wheel or kiln, the traditional pots, which store water and grains, are fired in an open fire pit. Florah Randela has been shaping these pots since 1981 and sharing her skills in her backyard. While chickens peck at the ground and freshly laundered clothes blow in the breeze, Randela’s nimble fingers thumb lumps of clay gathered from the river. 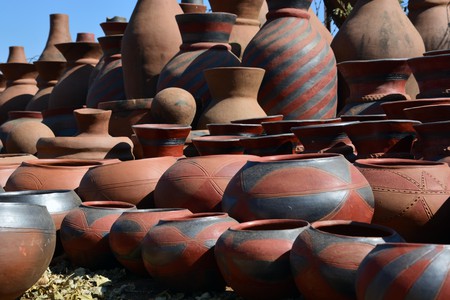 Randela’s pottery features decorative geometric designs and symbols, such as fish. Depictions of fish are omnipresent in this region, and many Venda legends feature sacred lakes and rivers. The fish is also a religious symbol in Christianity and traditional, ancestral folklore, and one of the most popular local legends features the tshidudwane, a creature similar to a mermaid. From ceramics to timber, the fish swims across all mediums, and many contemporary sculptors of the Mbhokota area depict the mermaid-like ‘half-people’ who passed between lakes and land. 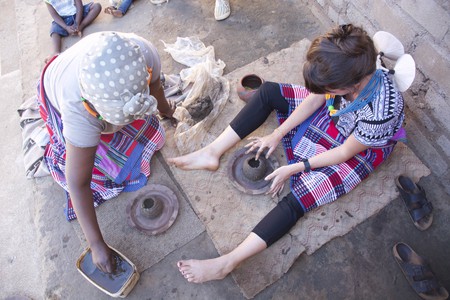 Training at the Vutshila art studio under the guidance of well-known sculptor Thomas Kubayi, Kenneth Nonyana produces wooden carvings and musical instruments in Tshivhuyuni village. Nonyana’s woodworks mix traditional techniques and influences from his everyday life, such as figurative carvings and household objects – a cue taken from the pioneering work of Hlungwani. 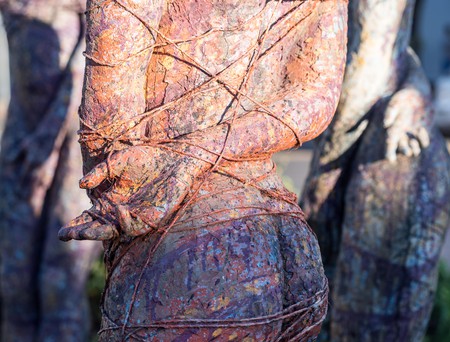 Pilato Bulala makes jewellery and sculptures, or ‘scraptures’, from old metal cogs, gears, spanners and other trash treasures. The entrepreneurial artist (who sells his creations on Instagram) explains every piece of his work. There’s the South African coat of arms, a quirky giraffe, an elegant mermaid and plenty of other recycled articles. He works during the day as a mechanic, and the rest of the day he spends creating scenes from South Africa’s journey past apartheid. 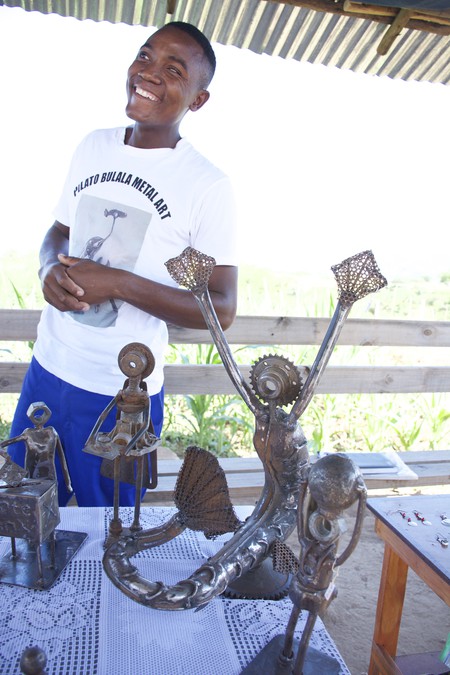 Apart from Limpopo’s traditional sculpture – an art form that is predominantly practised by men – the Ribola Art Route honours local women’s cultural heritage. The Twananani Textiles centre is one of the most established stops along the route, having started back in 1983 when 23 women began to paint, block-print, bead and embroider Tsonga designs onto cotton fabric. 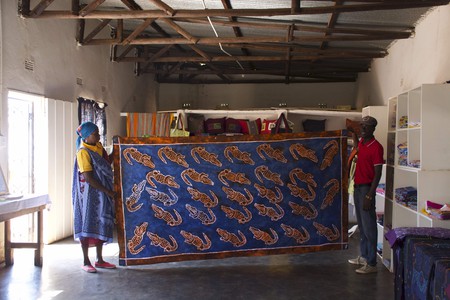 The batik-style fabrics are expertly stencilled, painted with wax and then dyed. Guinea fowls, crocodiles, foliage and the little fish symbol feature on the fabric, celebrating the stories of Mbhokota.

After meeting these artists and hearing their life stories, visitors will likely notice the trail of subtle signposts along the village roadways – clay pots perched on the edge of the roads are part of an age-old ceramic practice. A bucket perched atop a long stick indicates that a booty of beer lies within at an unofficial shebeen, and if a sign declares ‘Art Inside’, it’s wise to pull in.

Tips for a self-drive along the Ribola Art Route

This self-drive adventure is best for adventurous culture vultures who want to see a different side of South Africa. Think bumpy back roads and hands-on experiences with the people who live in Mbhokota and its surrounds. It’s best to drive only during the daytime, and hire a guide if you are not sure about the route.

Keep a few South African rands at hand, as many of the artists only accept cash payment. It’s customary to tip the guide, and craft markets and vendors can also be found at many of the stops.