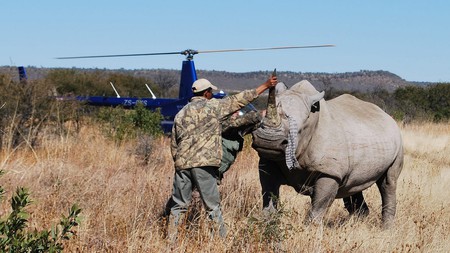 Rhino populations in Africa have now reached a tipping point where the number of deaths outnumber the births. Discover the stark reality of the rhino poaching epidemic in Africa, as we look at some shocking truths that have recently been uncovered.

Julian Rademeyer is an award-winning investigative journalist and author of the bestselling book Killing for Profit, the culmination of a two-year investigation into the illegal trade in rhino horn. He was a founding editor of the fact-checking and news website Africa Check, and a senior research fellow of the Global Initiative Against Transnational Organised Crime. Julian is also Project Leader at TRAFFIC, the international wildlife trade monitoring network. We spoke to him about the ruthless poaching of rhinos in Africa and the uphill battle that conservationists face in trying to preserve these magnificent creatures.

The truth in numbers

It is estimated there are about 25,000 rhinos left in Africa, a fraction of the tens of thousands that existed just half a century ago, with the last decade seeing a staggering increase in rhino poaching in southern Africa. Julian refers to the “tipping point” where the numbers of rhino deaths outnumber births, and says that’s already occurred in some populations. 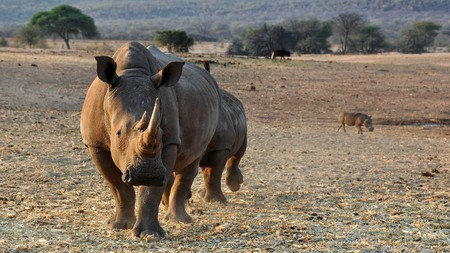 At least 8,200 rhinos have been killed by poachers in Africa in the past decade. South Africa, home to approximately 79% of Africa’s last remaining rhinos, is an obvious target, and is where the vast majority of poaching incidents occur.

Of particular concern have also been the dramatic spikes in poaching in Namibia and Zimbabwe, two key states for the critically endangered black rhino. “Namibia saw little to no poaching between 2006 and 2012, but in 2015 numbers sharply increased to 90. In the same year, 51 rhinos were killed in Zimbabwe, more than double the year before,” says Julian. 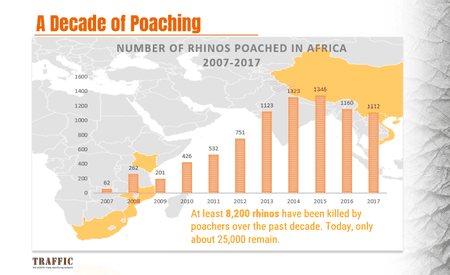 Stats about poaching in Africa | © TRAFFIC

The complexity of smuggling routes

Julian says that smuggling routes are complex and dynamic, exploiting weaknesses in border controls and law enforcement capacity, and span countries and continents, passing through multiple airports and legal jurisdictions.

“Myriad methods are used to smuggle the contraband and evade detection,” he says. “Whole horns are cut into smaller pieces, concealed inside machinery and hi-fi speakers, disguised as curios or toys, worked into beads and bracelets, wrapped in foil and coated in toothpaste or shampoo to defeat X-ray machines and mask the stench of decay, hidden in box wine cartons and in consignments of timber and cashew nuts – and those are just a few examples.”

A new tactic being employed by smugglers in South Africa is to carve horn into bracelets and beads, or cut them into rough disks. These, together with the offcuts and rhino horn powder, are then packaged in South Africa in an effort to evade detection at airports and supply readymade products to buyers in Asia. “If someone walked through an airport wearing bracelets, beads and bangles, who would stop them?” comments Julian. 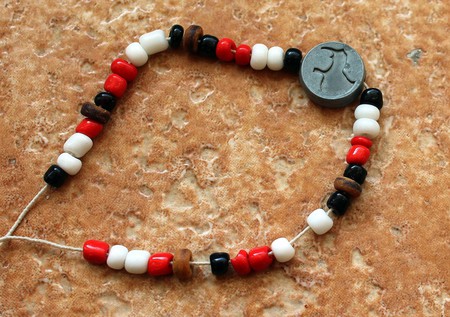 Although more than 2,000 suspected poachers and rhino-horn smugglers have been arrested in South Africa in the past several years, the conviction rate, when compared to the number of arrests made, is low. Julian says this is largely due to prosecutors and courts facing a huge backlog of cases, as well as high-profile cases that drag on for years, draining resources.

“Another issue that has complicated law enforcement accountability is that rhino poaching or wildlife trafficking is not a specific reportable crime category on the police Crime Administration System (CAS) but is categorized under a variety of other criminal offences, such as trespassing or hunting without a permit, that make up the crime. This makes it very difficult to accurately monitor rhino poaching cases using that system. If poaching as part of the broader wildlife trafficking crime category was a reportable crime on the database, it would also compel police to provide statistics in annual reports and be accountable for pursuing these cases,” he comments.

A further obstacle is what Julian refers to as the “silo effect,” which refers to all the various players working in their own roles and not sharing information. “This lack of collaboration and information sharing between police stations, police units, national parks, government departments, security agencies and countries is possibly the single greatest frustration for many investigators.” 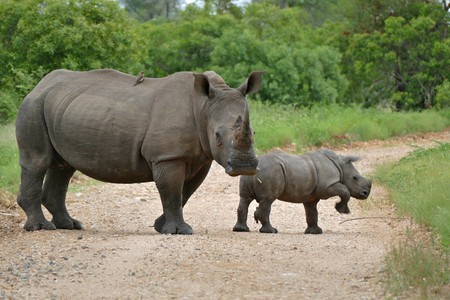 “Added to this is the simple fact that borders, red tape, multiple legal jurisdictions, and a lack of co-ordination and co-operation between countries are a boon to transnational criminal networks whose tentacles span the globe and are a bane to the law enforcement agencies rallied against them. They can adapt faster and more efficiently than law enforcement agencies can…This is not a problem that rhino range states can address on their own. It is a global issue… Jailing and killing poachers will not solve it,” he continues. 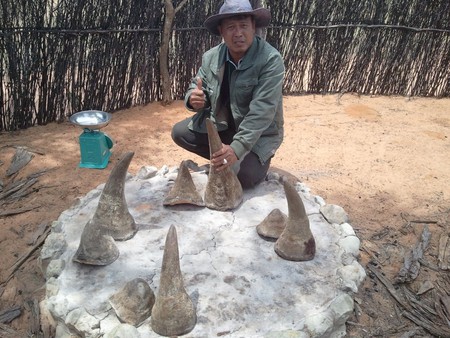 The cost to human life

In the Kruger National Park alone, where poaching is at its worst in South Africa, it is estimated that between 150 and 200 suspected poachers were killed between 2010 and 2016, although neither the police nor SANParks will provide official figures. Julian also says, “Seven soldiers have lost their lives, five of them in a helicopter crash and two in accidental shootings. A ranger and a policeman were killed in April 2012 when they opened fire on each other in a so-called blue-on-blue incident. So there is an appalling human cost.” 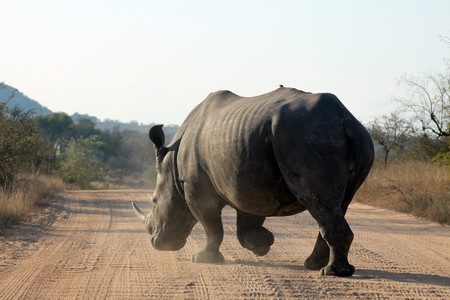 When asked why the numbers of rhinos killed annually is still increasing, Julian says, “They aren’t increasing overall, and there have been small, encouraging declines, mainly as a result of improved anti-poaching measures in the Kruger. Ultimately, though, poaching levels remain unsustainably high, and the sums that poachers and transnational criminal syndicates stand to make in what remains a largely low-risk, high-return business are so great that there is little incentive for them to stop.”

He believes that only a global effort will impact the war on poaching, and that disrupting the criminal networks requires a radical rethink of national and international law enforcement strategies, and a concerted effort to include communities living in and around national parks in conservation efforts.

“We also need the realisation that rhino poaching and wildlife trafficking is not a green issue, as game rangers, conservationists, and other environmental ministries have neither the mandate nor political power to address transnational organized crime,” he adds, saying that the issue of corruption also needs to be addressed, as this lies at the root of the problem, and any efforts to resolve wildlife trafficking will also require efforts to address corruption in state, police, intelligence, and conservation agencies and the private sector. 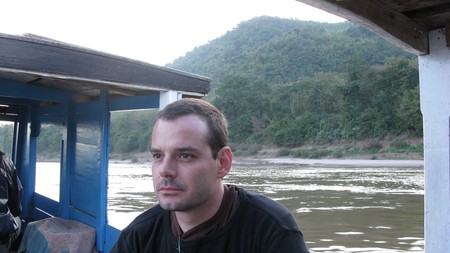 About TRAFFIC and Killing for Profit

TRAFFIC is a non-governmental global conservation organization that monitors trade in wild animals and plants. They work closely with the World Wildlife Fund and the International Union for Conservation of Nature, and strive towards a sustained reduction in illegal wildlife trade, by increasing the risks and reducing the rewards for trading in wildlife contraband, thus reducing criminal motivation.

Closing on a personal note, we asked Julian what it felt like to be shortlisted for the Alan Paton Award, South Africa’s most prestigious literary prize for non-fiction. “It was an unexpected honour,” he said. “For any writer who has spent years obsessively pursuing a subject, holed up with a laptop, it is a wonderful experience to have your work recognized,” he concludes. 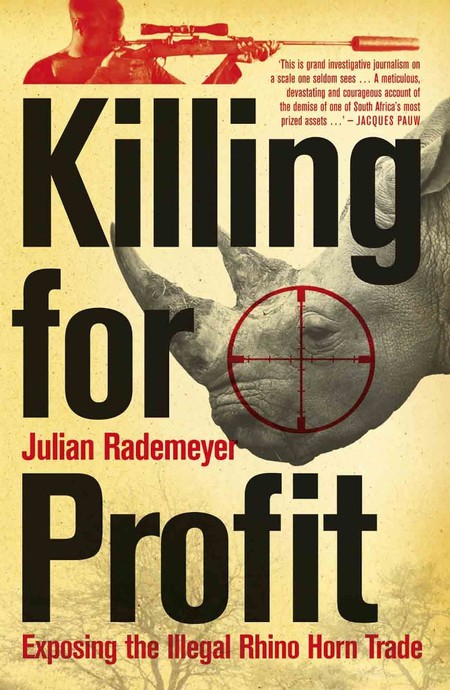