How Cuddling Cubs Could Be Killing Lions 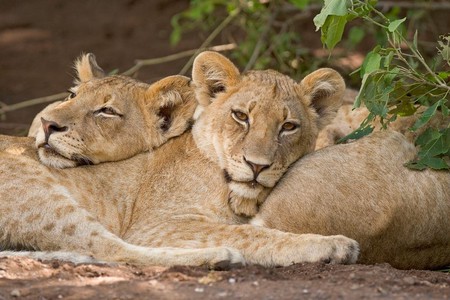 While lion cubs look cute and it’s tempting to cuddle them, there is an increasing awareness in South Africa that the handling of lions in captivity only serves to assist the canned lion-hunting industry, where bloodthirsty hunters pay top dollar to shoot and kill “wild” lions that have in fact been conditioned to human interaction. Recently, the Endangered Wildlife Trust in South Africa has launched a highly effective and hard-hitting campaign aimed at discouraging close encounters with African predators.

World Wildlife Day is celebrated annually on March 3 and this year’s theme is “Big Cats – predators under threat,” with the aim of sharing information regarding these majestic creatures and the threats they face. There are currently approximately 3,490 wild lions in South Africa and few die peaceful deaths, with most being killed either by other lions or by humans. It is human activity, however, which presents the real threat to the species, as lions are often hunted for sport and to reduce risks to domestic animals. Habitat destruction is also a concern, as growing populations of people appropriate more land for their cattle, goats, and farming activities. 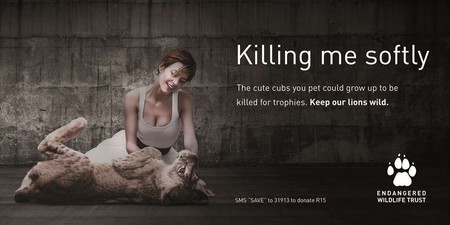 The latest billboard campaign launched by Endangered Wildlife Trust (EWT) focuses on the human interaction side of the problem and wildlife facilities in South Africa that offer activities such as cub-petting and walking with lions. The strong campaign message is clear, urging locals and visitors alike to not support such establishments, as in doing so they could quite likely be contributing to the canned lion-hunting industry in the country.

Commenting on behalf of EWT, Belinda Glenn says that the new campaign builds on the organization’s lengthy commitment to educating the public about the perils of cub-petting, and indeed, any interactions with captive carnivores. “The EWT does not support interactions with captive carnivores under any circumstances, and implores the public to appreciate these majestic animals in their natural habitats. While it may seem like an appealing experience to the uninformed, the cubs people pet may well go on to be killed for trophies. Let’s keep them wild instead,” says Glenn. 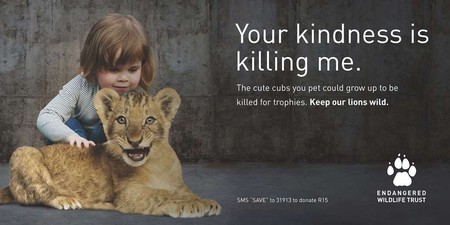 Bred for the bullet

An ardent supporter of this initiative is Blood Lions™, a campaign that aims to bring an end to canned hunting and the exploitative breeding of lions and other predators on farms across South Africa. They refer to captive lions as “bred for the bullet” and warn that very few predator-breeding facilities in South Africa can be regarded as genuine conservation undertakings. While some breed or hold predators for commercial purposes such as canned lion-hunting, others use volunteer programmes as lucrative revenue streams. 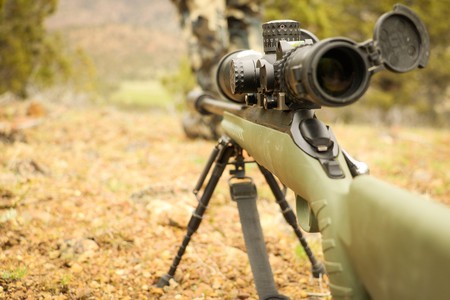 The Blood Lion™ campaign has also filmed and produced Blood Lions, a feature documentary that looks at all aspects of predator breeding in South Africa.

Reasons not to take the hands-on approach

The EWT says that although carnivore touch programmes are popular tourist attractions, the captive keeping and breeding of large predators does not contribute to carnivore conservation in South Africa. They also question the educational value of these facilities and believe that at best they offer “edutainment,” with no measurable educational value.

Even more concerning is the welfare of the lions, as cubs are often removed from their mothers, causing stress to the animals, while boisterous youngsters are sometimes drugged to make them more placid and easier to handle. In addition, there is often no regard for social structure or enrichment of the lions, leading to behavioral problems due to boredom or stress. 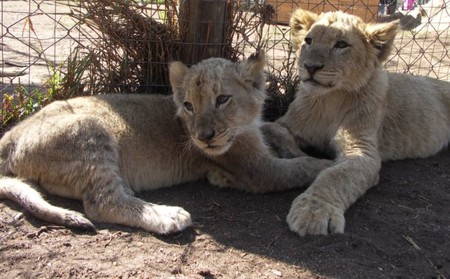 There is also overwhelming evidence that strongly links lion-breeding facilities to canned lion-hunting, as when cubs get too old for petting and loose their cute value they are removed from the programme and may enter into the supply chain for canned hunting. Lions that have been conditioned into accepting human presence and interaction when they are young become easy targets for trigger-happy hunters, who seldom realise that the “wild” animal they just killed spent its entire existence at the mercy of humans. 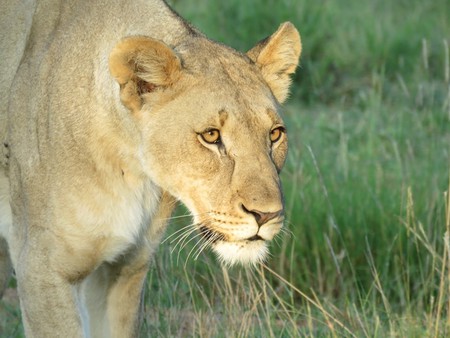 The EWT holds that touching programmes and the captive keeping and breeding of carnivores present serious ethical and welfare issues which are routinely linked to exploitation and canned hunting. They do not contribute to the sustainable, responsible use of the country’s wildlife resources and in most cases are detrimental to conservation. The EWT does not support such facilities and believes that carnivores should be viewed in their natural habitat, where they contribute to biodiversity conservation, as keystone and flagship species where their health and welfare are not compromised.