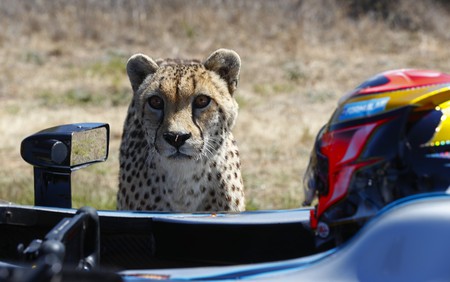 There’s more to Formula E than electric cars speeding through cities around the globe. Launched in September 2014, the world’s first fully electric, single-seater street racing series is refining and improving electric vehicles to, ideally, be used in everyday life, which could help to reduce air pollution and the effects of climate change.

With this in mind, Formula E announced a global partnership with the United Nations Environment Programme in May to improve inner-city air quality and promote alternative energy solutions.

Formula E continued its efforts in raising awareness for climate change and its effects on the environment with a video of July’s Montreal ePrix winner and TECHEETAH driver Jean-Éric Vergne racing a cheetah in a remote part of the Western Cape in South Africa. Both the car and world’s fastest land animal have capabilities of reaching 0–60 mph in approximately three seconds.

“We knew the similarities in performance between the Formula E car and a cheetah, so we were curious to see the outcome,” Formula E founder and CEO Alejandro Agag said in a release. “But, what’s even more important is to determine the outcome for the future of not only us, but the cheetah and other animals we share our planet with. We only have one planet and we must address the issues we currently face from the source and electric cars can play a key role in reducing CO² emissions worldwide.”

There are approximately 7,000 cheetahs remaining in the wild and Formula E hopes videos like this help raise awareness of how climate change is affecting such animals. The cheetah population faces a litany of threats, including illegal trade of cubs for pets, diminished prey due to habitat loss, and fragmentation aggravated by climate change.

The film was overseen by conservation experts and animal welfare organizations. It was released in partnership with Animal Issues Matter, Cheetah Outreach, and the Endangered Wildlife Trust.

“Both the TECHEETAH Formula E team and I want to be part of raising awareness for the wider impact that climate change has on our planet,” Vergne said in a release. “We do it mostly by showcasing and developing our electric cars across the world throughout the Formula E season, but we wanted to do more outside of the race track.”