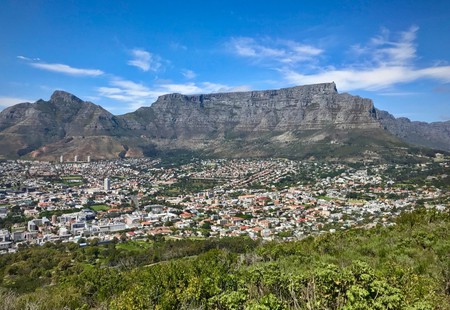 There’s no avoiding Cape Town’s Table Mountain. It rises up to 1086 metres (3562 feet) above the city as a surreal backdrop, spreads out three kilometres (almost two miles) wide, and stretches up to 50 kilometres (31 miles) behind the flat top.

Long before its first recorded summit in 1503, Table Mountain‘s magnetic pull has attracted locals and visitors alike to explore its various reaches. In spite of its seemingly accessible nature, thanks in no part to a modern cableway that gets you to the top in less than five minutes, Table Mountain is a vast and diverse mountain that would take years for any individual to explore. Some are better at exploring it than others; here’s a small taste of what’s waiting for you up there in 17 incredible Instagrams.

The mountain’s sheer cliffs often get you above the cloud line. From the ground, it may look like a day to stay indoors, but those in the know will head out for a totally unique view.

There's nothing quite like an adventure into the mountains. #beautifuldestinations #natgeoyourshot #thisissouthafrica

One of the more accessible sunset walks on Table Mountain is Kloof Corner. Though this trail continues all the way to the summit, many use this shortened version as the perfect spot for a quick after-work hike.

Though the most popular way to reach the summit of Table Mountain, the final reaches of Platteklip Gorge is anything but easy, and full of potential Instagram opportunities.

Hiking along the base of the Twelve Apostles offers panoramic views of Lion’s Head and the Atlantic Seaboard.

India Venster, so named for these window-like rocks on the way to the summit of Table Mountain, is one of the most remarkable hikes on the front face.

Turn around almost anywhere on the front face of Table Mountain and there’s a good chance you’ll be treated to views of the Cape Town CBD.

Atlantic fog and beautiful sunrise over the city of Cape Town 🌅🇿🇦

The eastern reaches of Table Mountain are less explored, and this route, called Mowbray Ridge, offers a challenging but exhilarating way to reach the summit of Devil’s Peak.

@gjmountford on #mowbrayridge having run a very windy #knifesedge – scrambling for his safety or a good #cuppajoe – gotta say I love this section of #el'diablo always delivers some excitement. #outsideisfree #run #trailrunning #choosemountains #dirtbagrunners

The Cableway is a remarkable feat of engineering, and is particularly eery when the cloud banks roll in and the lights flicker through them.

The Kloof Corner ascent to the summit of the mountain is one of the most challenging, with sheer drops and steep climbs. Yet with views like this, it’s a route well worth considering for the fitter and more experienced hikers and climbers.

Just one of the many exposed vertical ascents on Kloof Corner. A few tricky sections will get your heart racing, but it's a manageable hike for most fit and reasonably experienced hikers. ———- #capetown #southafrica #thisissouthafrica #tablemountain #kloofcorner #signalhill #hike

Many people scuttle off the mountain as the sun sets, but those who hang around are richly rewarded.

best seat in the house 🌌 — for me, the best part of traveling is meeting creative people all around the world who are equally up for ridiculous yolo missions, such as hiking up table mountain at midnight. big props to these gentlemen @hlonicoleman and @lukemaximobell for showing me this unique view of lion's head 🙏🏻 @southafricaanz #wowsouthafrica

Each side of Table Mountain takes on a different look and feel. The eastern slopes receive a large amount of rainfall, which reveals itself in dense forests and, during winter, picturesque waterfalls.

One of the many beautiful waterfalls on display today! Absolute soulfood! This one is a 4 minute exposure. How was your day? 😀

The ascent up Skeleton Gorge is one of the most popular on Table Mountain. Starting in Kirstenbosch Botanical Gardens, and working its way through pristine forests, it’s also one of the most impressive.

Tranquility Cracks, on the far reaches behind the main table, offer remarkable views over the Atlantic Ocean.

As the great #JohnMuir said, "how glorious a greeting the sun gives the mountains!" …super stoked to have gotten back to the #tranquilitycracks today, especially when we could actually see! #CapeTownPhotoEssay

Lion’s Head, though slightly removed from the main section of Table Mountain, is still part of the same geographical feature. It’s one of the most popular peaks to hike on warm, clear days, but the rewards when the clouds roll in are just as great.

When Saturdays aren't #ftb, they're for editing photos and therefore double posts 👊 I saw this fog creeping over #SignalHill on my hike Monday morning and then again yesterday! Such a cool phenomenon 🙌

The majority of people who summit Table Mountain do so via the aerial cableway. It’s a thrilling five-minute ride up the front face of the mountain, and views like this await you just a short way from the upper station.

Castle on the hill, what? In an unrelated note, I'm on my way to Indonesia and Bali… hit me up if you're there

Even the lower reaches of the mountain offer incredible views just above the Cape Town City Bowl.

With so much diversity on top of Table Mountain, from incredible ocean views, to remarkable plant and animal life, no two hikes are ever the same, and all elicit a similar amount of joy from those who take the time to explore the mountain’s reaches.