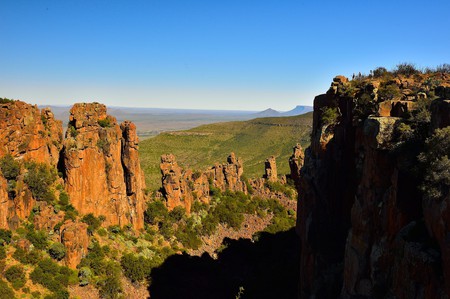 A haunting beauty that grasps at your soul permeates the Karoo’s Valley of Desolation, where a gaping chasm cuts through the mountains of the Camdeboo, flanked by astounding rock formations. Its mesmerising landscape is a natural phenomenon where hours can be spent in quiet contemplation.

Why it’s so special

Formed over 100 million years ago by a violent volcanic shift, the Valley of Desolation consists of sheer cliffs and precariously balanced giant dolomite rocks that drop down sharply to the valley floor 120 metres below. Looking down from the rocky peaks, one sees an immense terrain of nothingness, or so it seems, where visitor’s whispers echo through the still Karoo air. The quiet stillness accosts the brain with a confounding peace, while the landscape magnifies into an intense clarity that is hard to describe. 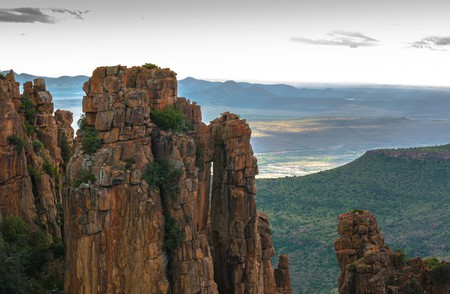 Akin to a deeply meditative state, the landscape ponders the emptiness, and this is where the magnificence of the Valley of Desolation lies. 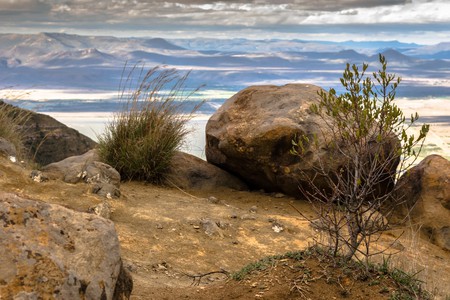 What to do there

Most visitors find themselves simply taking in the beauty from the Valley’s peaks as conversation ceases to be important and time slips away. There are many options when it comes to panoramic viewpoints across the cliff tops from where one can see the nearby historic town of Graaff-Reinet and well across the plains of the scenic Karoo. Those who want to maximise their experience can try the Crag Lizard Trail, a well-marked walk beginning in the parking lot that takes approximately 45 minutes to complete. 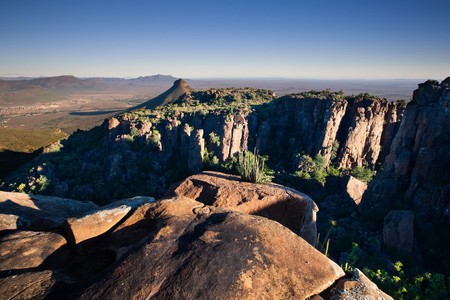 A geological marvel and monument

The Valley of Desolation was declared a national monument in 1939 and, with its staggering columns, is sometimes also referred to as the ‘cathedral of the mountains’. Its rock formations consist of dolerites that have formed jointed pillars. Over time, erosion of the softer sedimentary beds has left these dolerite pillars to look as if they are rising up to the heavens at heights of 90 to 120 metres. 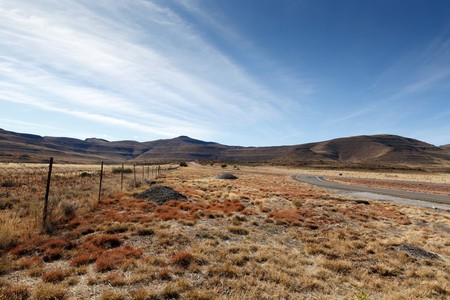 Other highlights in the area

The Valley of Desolation is located within the Camdeboo National Park, where a fabulous diversity of fauna and flora are to be found. Over 220 bird species have been recorded in the park and there is a good selection of animals to seek out. Unique species of wildlife include the endangered Cape mountain zebra, the majestic black eagle and the Kori bustard, the heaviest flying bird in the world. Numerous picnic spots offer the chance for a break, while hiking trails, ranging in duration from one hour to overnight, should keep the energetic entertained.

The simple, yet stunning Karoo vegetation that blankets the terrain is in itself a beautiful sight to behold, where immense plains give way to rolling koppies (rounded hilltops) and the unique aroma of the bushland filters through the air. 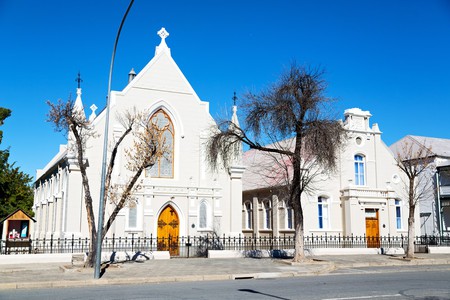 Only a few minutes away is Graaff-Reinet – the fourth-oldest town in South Africa – steeped in rich Cape Dutch history. It is home to more national monuments than any other town in South Africa. Some of the highlights to explore include the Reinet House Museum; the Dutch Reformed Church and Stretch’s Court, a picturesque restored street of Karoo cottages with brightly painted shutters and doors.