Everyone Is Going Crazy over This $2000 Rug 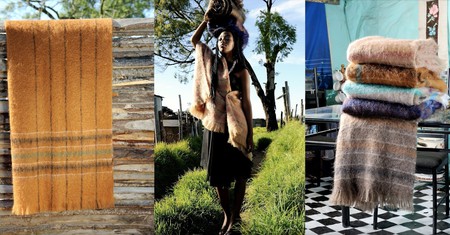 A South African fashion brand is making waves, shortly after returning from the hugely successful Cape Town and Lagos fashion weeks. The reason? They’ve just launched a new line of rugs, the cheapest of which is retailing for a cool US$2000.

The rugs are being made by fashion brand MaXhosa by Laduma Ngxokolo, which has received endorsements from the likes of Beyoncé and Alicia Keys. Black Panther actors John and Atandwa Kani were also spotted wearing MaXhosa shawls to the South Africa premier.

Furthermore, MaXhosa’s winter collection was recently featured in Vogue and has seen widespread acclaim. The brand is no stranger to local and international publicity, but it’s the rugs that have got many tongues wagging.

Laduma, who founded the company and made his first rug in 2014, now charges up to US$4000 for a single item. He makes the rugs out of mohair and wool and they can take up to two months to be completed, depending on the specifications.

While celebrities are clearly comfortable shelling out for a genuine and undeniably striking MaXhosa rug, social media has been quick to respond to the high prices as well. Even though many of the items drastically outprice much of the local market, many are rallying behind the local brand. And it’s clear that Maxhosa is more than happy to ride the wave of publicity.

Gorgeous @imaanhammam in a #MAXHOSA AW18 coat and beaded earrings, at the #AriseFashionWeek in Lagos 🇳🇬👸🏾

If you like the #MAXHOSA rug and can afford it buy it, if you can’t then espire to. Plain and simple. We can’t be asking this young man to devalue his product when we should be celebrating his arrival on the international stage

Will probably take years to save up for ezi rugs…saving up. pic.twitter.com/91iDawxtzK

If you’re in the market for some new and exclusive rugs fresh from South Africa, you can pick up your original MaXhosa on the company’s website.