A Guide to Mzoli’s in Gugulethu, Cape Town 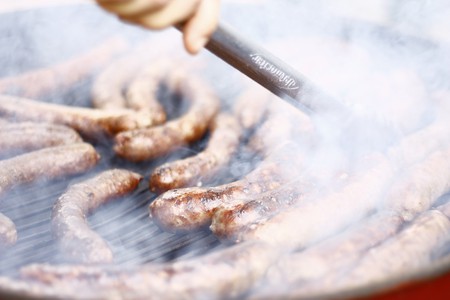 A meat-lover’s trip to Cape Town wouldn’t be complete without a stop at Mzoli’s. Here’s how to make the best of it.

If you’re looking for the best hangout spot on a Sunday afternoon in Cape Town, it’s likely you’ll be given recommendations for the popular Gugulethu restaurant, Mzoli’s. It’s earned accolades for its meat, ambience, and location. Not without its controversies and need for preplanning, it is without doubt a Cape Town institution.

Praise for Mzoli’s from famous visitors

Mzoli’s has received near-universal acclaim from those who visit. The butchery / restaurant / backyard hangout has been a popular destination in the city since Mzoli Ngcawuzele started selling meat from his garage back in 2003.

Over the years many famous faces have appeared at Mzoli’s – from local musicians and celebrities through to chef Jamie Oliver. Many who’ve been there sing its praises; it’s one of the few places in the township that both Gugulethu residents and tourists frequent, and leave equally enthusiastic.

Mzoli’s is a melting pot of fascinating people, wide-eyed tourists, and regular Capetonians, and is a largely inclusive space – although it’s a long way from being a perfect insight into ‘township life’, as many outsiders attempt to cast it.

Those who head there to gawk at poverty, or to claim it as a badge of their own progressiveness also detract from the overall concept. At its core, though, Mzoli’s remains a place to kick back on a Sunday afternoon with a dynamic and enthusiastic crowd.

Sunday is the best day to experience Mzoli’s

Mzoli’s is open throughout the week, but there’s only one day you really want to head there and that’s on a Sunday, sometime around lunch time. It’s on Sundays that the restaurant really comes to life – crowds file through the door in their droves and DJs keep the mood vibrant until late afternoon.

If you’re expecting to get a seat on a Sunday you should plan to arrive early – any time after midday and it’s likely you’ll be standing if you can get in at all. Getting in early also means you can pick out your meat and get comfortable before the party really kicks off.

Bring your own booze (and greens)

Mzoli’s makes its money off of meat and pap – a traditional porridge-like accompaniment made from maize. This means two things: you won’t be ordering salads and vegetables off the menu, and you’re free to bring your own drinks – alcohol included.

If you’re set on eating your greens you’ll need to pack your own, and it’s best to load up a bag with a selection of drinks to last you the afternoon. Though if you run out of alcohol you can always find someone nearby to sell you a few bottles. 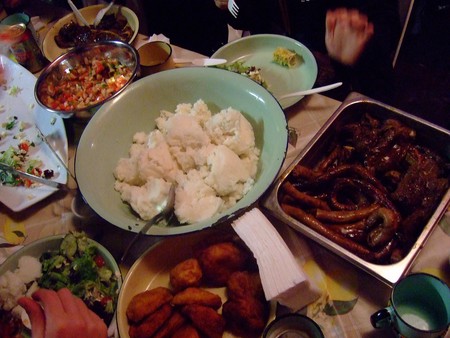 A delicious spread of braai meat, pap and salads at Mzoli's | © yosoynuts / Flickr

How to get to Mzoli’s

Getting to Mzoli’s depends on where you’re coming from. Many people who visit simply arrive on foot or use minibus taxis. If you’re travelling through from suburbs further afield, you’ll probably want to drive. It’s possible that you can take an Uber there and back, though getting a return ride might be difficult.

If you have your own transport, tap the restaurant location into your phone and head straight there. There’s ample parking near the venue, and although many outsiders are fearful about driving it should be treated like any other drive in South Africa – exercise caution at traffic lights, don’t display any items of value on the way, and definitely do not leave anything – even something of no value – on your back seat or in the trunk of your car.

If you’re of a vegetarian persuasion you might want to give this one a miss, or pack your own snacks. Mzoli’s is essentially a butchery with literally bucketloads of meat on display.

When you arrive, head to the kitchen and pick out what you’d like from the counter – typically you’ll find borewors (thick sausage), chops (lamb or pork on the bone), and chicken. Carnivores can’t go wrong with loading up on all items, but be sure to add a healthy portion of pap to go along with it. Assistants will load everything up in a metal dish, attach a till slip using some marinade, give you a copy, and then shuffle you along to the coal face out back.

The back yard of Mzoli’s is where the magic happens. There, a team of expert braaiers (barbecuers) are on hand to cook your meat over open flames – all you need to do is hand your bowl of meat to one of them. Return every now and again with your copy of the till slip to find out if your lunch is ready, and when it is you’re free to eat wherever you find a spot.

Most go the communal route at Mzoli’s, ordering a large selection of meat for their own party. Knives and forks are also largely a no-no, so feel free to get stuck in using your hands.

As the day wears on Mzoli’s often starts to heave – the music gets louder, and tables and chairs part for a makeshift dance floor. It’s easy to spend a few hours there soaking up the atmosphere and trying hard to fit more meat into that stuffed belly, but most suburbanites scuttle back to their homes before sunset. 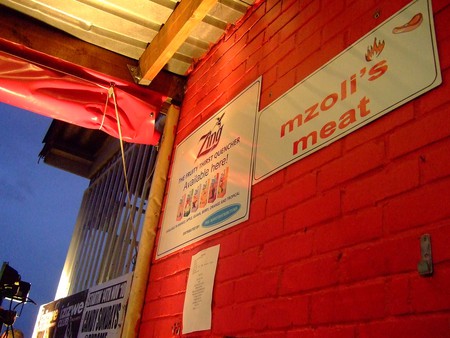 There’s no doubt that Mzoli’s has become an institution in Cape Town, and that it fills something of a gap in the city that allows hesitant city slickers a chance to mix with welcoming township residents. But it’s a somewhat contrived environment that should not be seen as a simplistic window into another world.

Owner Mzoli Ngcawuzele has established himself as a mogul in the city – his various business initiatives have created employment and helped bring tourism into Gugulethu at a time when many feared to step out of their vehicles. And although it’s not a quick-fix for the country’s social and economic inequalities, there’s no denying that it’s opened many visitors’ eyes to a part of the city that, prior to Mzoli’s, few had considered entering in anything other than a sanitised tour bus.