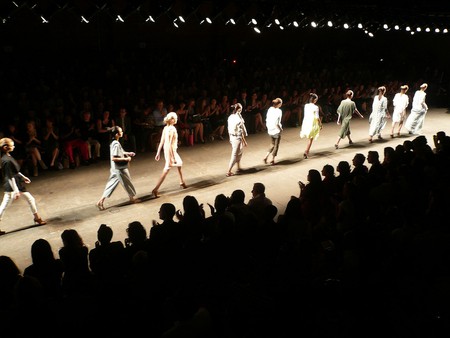 South African fashion has garnered recognition from around the world with emerging designers forging ahead by combining their African roots with contemporary trends. This has proved to be beneficial for many black-owned fashion labels who have gained success in their own right.

Celeste Arendse is the creative director behind Selfi. A fashion design graduate from Cape Town, Celeste worked for renowned South African fashion label Kluk CGDT as a manager before launching her first womenswear collection in 2010. Selfi explores the ‘multidimensional parts of the self’ through its ready-to-wear women’s and menswear lines. The brand emphasizes easy, wearable tailoring, deconstructed shapes and custom prints in a range of enticing separates. Since its launch, Selfi has showcased at Mercedes-Benz Fashion Week in Cape Town and Johannesburg, Pure London and New York Fashion Week.

Born in the city of Vereeniging in Gauteng, Khothatso Laurence Tsotetsi is an emerging designer making waves on the South African fashion front through his sophisticated womenswear brand, Tsotetsi KL. Khothatso is passionate about fabric and the way it moves and falls across the human body, which in turn influences his designs. The brand creates feminine dresses, pretty tops and flirty skirts in a range of prints and colors, and recently launched a couture bridal range amid great fanfare.

Award-winning designer David Tlale is a household name in South Africa. Known for his show-stopping gowns and expertly tailored separates, you can always rely on David to put on a memorable show due to his penchant for the dramatic. The brand’s masterful drapery, sculptural detailing and exquisite appliqué has garnered the interest of fashion influencers around the world, which landed him a spot on the international stage at Mercedes-Benz Fashion Week New York where he has shown every year since 2012. In fact, he was the very first South African to showcase solo at the prestigious event.

Rich Mnisi is quickly becoming the darling of South African fashion through his namesake contemporary fashion brand launched in 2014. In the short time he’s been around, Rich has already been named Africa Fashion International Young Designer of the Year and has appeared in top publications including Marie Claire, Elle and GQ Style. Rich draws inspiration from pop culture, which is evident in his quirky designs displaying expert fabric manipulation, androgyny and a variety of textures. Already a hot favorite among the local fashion crowd, it looks as though Rich Mnisi is here to stay.

Laduma Ngxokolo is one of Africa’s finest knitwear designers and the man behind the Xhosa-inspired fashion brand, MaXhosa by Laduma. Laduma established his brand in 2011 with a desire to explore knitwear design solutions that would be suitable for the amakrwala (Xhosa initiates) traditional dress. He developed a premium knitwear range that celebrates traditional Xhosa beadwork and utilizes South African mohair and wool. Since then, his brand has grown to include women’s and menswear in a range of signature prints and colors. Laduma has received numerous awards, including the 2015 Vogue Italia Scouting for Africa prize to showcase his collections at the Palazzo Morando Show in Milan, Italy. In 2014, he was awarded the WeTransfer Scholarship to study a Masters in Material Futures at the Central Saint Martins in London. Today the label is sold in Cape Town, Johannesburg, London and Tokyo.

Spring trend alert: The make-up no make-up look which was trending on the #maxhosabyladuma runway😍 Pic by: @mosipuri

NN Vintage’s bright and bold African designs will make you swoon! Founded by Nhlanhla Nciza, one half of acclaimed South African singing duo Mafikizolo, this eclectic label has taken South Africa by storm. NN Vintage reflects Nhlanhla’s unique style and passion for traditional African wear but with a contemporary twist. Her line of African-chic dresses, peplum tops, skirts and pants are inspired by fashion from the 40s to the 80s and are sought after by women who love to make an entrance.

A little #NNVintage / @nn_vintage to warm your fashion appetite. South African based clothing label owned by @nhlanhla_nciza of Mafikizolo fame.

Thula Sindi is a Johannesburg-based designer who launched his namesake brand in 2005. Featuring chic womenswear, Thula Sindi embraces modernism, simplicity and sophistication. After graduating from fashion school, Thula landed a job as head designer at Vlisco, a Dutch textile company where he mastered his design skills. After successfully breaking into the industry, Thula went on to show at fashion weeks around the world, including Paris, Rome, Hong Kong, Washington and New York. In 2012, he was named South African Fashion Designer of the Year, and in 2013 was added to the Forbes ‘30 under 30: Africa’s Best Young Entrepreneurs’ list.

For the love of Black & Gold 😍 #ThulaSindiAtTheZone