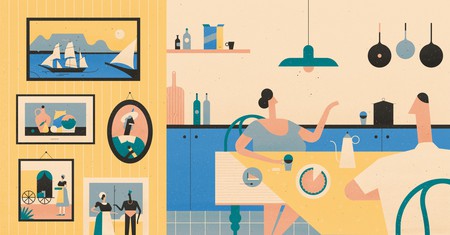 Afrikaans, a young language spoken by approximately six million people, derives from the amalgamation of different nations and cultures, especially the Dutch, who occupied South Africa and the Cape during the 17th century. Here are some of the many words that will make non-Afrikaans speakers fall in love with this beautiful Germanic language.

Geluksalig, used to describe the ultimate form of happiness, is a common noun derivate from the Dutch words geluk (happiness) and zalig (blissful). The word is most commonly used in a religious context and that of the hereafter.

From the Dutch word glimlach (1765), this word is an adaption of glimmen, referring to glistering eyes or teeth that are the result of a smile. The word glimlag was first recorded in the Afrikaans language in 1902.

Hartlam is a combination of the words hart (heart) and lam (lamb). This term of endearment refers to a person lying close to the heart of another, like a small, vulnerable lamb.

Kolwyntjie is derivative from the Dutch word kolombijntje (originally colombijn). The exact origin is unknown but the most plausible theory is that this sweet treat was served on the day of St. Colombino.

From the Dutch lichtzinnig (1781), this word is a combination of licht, pronounced “lig,” (meaning light) and zin, pronounced “sin” (sense or mind). The first record of the word being used is in the Patriot woordeboek in 1902.

Mooi, meaning attractive or beautiful, was first used in the Dutch language, and in early Afrikaans, its use is recorded in the Resoluties van de Politieke Raad (Resolutions of the Political Board) on April 8, 1711. Apart from Afrikaans, the word is only used in Dutch and East Frisian.

Ontsagwekkend is a combination of the Dutch word ontzag of which zag is the past of zien (see), while wek translates as “to promote confidence in someone.”

From the Dutch seaman’s language, the word piggiwyn was first recorded in 1668. The Cape-free burgher Büttner used the pure Afrikaans forms of the word, pickoweijn and pikowyn, since around 1715.

Developed from the Dutch word lecker and extended into the Afrikaans word lekkernytjie, the first record of the word being used in the Afrikaans language is by Pannevis in 1880.

The Dutch schitteren is a later form of schetteren (1556) which means “noise” or “repetitive noise.” From there the meaning changed to “exuding light that seems alive.” The word skitter was first recorded in the Afrikaans Patriot woordeboek in 1902.

A combination of the words spook (meaning ghost), and asem (meaning breath) because of the light, fluffy texture of the confectionary that simply melts away in your mouth.