Dakar national treasure, legend, best percussionist of the continent: these titles apply to Doudou N’diaye Coumba Rose, whose life was celebrated when he passed away on August 19th, 2015. Commentators struggled to find words that could capture the importance of this exceptional percussionist, composer and conductor. His nickname, ‘the mathematician of rhythms,’ is testament to the musical genius which propelled him to worldwide fame. 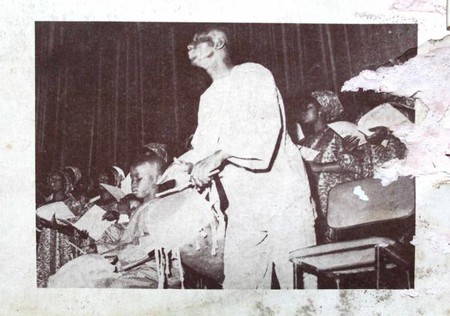 Doudou N’diaye Coumba Rose during a performance with the Chorale Saint Joseph de Medina de Dakar (Directed by Julien Jouga) at the National Theatre. Dakar, 26th of May, 1972.

Doudou N’diaye Coumba Rose’s work drew on his lifelong research of Senegalese drums and rhythmic languages, which he mastered, reinvented and integrated into a variety of contemporary musical genres. Born into a griot family in Dakar in 1930, Rose started playing drums at the age of seven and became the student of Mada Seck, the best tambour-major in the country at the time, for many years. While earning his living as a plumber, he spent much of his time traveling the Senegalese countryside, meticulously learning to play a variety of Senegalese drums (bougarabou, saourouba, assicot, khine, lambe, n’der) and their complex rhythms from the elders. He is said to have mastered more than 1000 rhythms and composed hundreds of his own. The sabar drum, used to conduct singing and dancing for certain rituals and celebration, or to communicate messages over long distances, became his main instrument.

When Senegal celebrated its independence in 1960, a composition of Doudou N’diaye Coumba Rose, featuring more than 100 drummers, became the soundtrack—the country’s first president, Léopold Sédar Senghor (a great admirer of Rose’s work) commissioned the music. Under Senghor, Rose composed a series of pieces for national celebrations and was appointed as the chef tambour of the National Ballet of Senegal. Senghor also commissioned his collaboration with Julien Jouga, founder and director of the Saint Joseph de Médina de Dakar choir, which was to last more than three decades, until Jouga’s death in 2001. Jouga became one of Rose’s best friends and closest collaborators; together they composed and adapted dozens of Christian choral pieces in Diola, Sérère, Wolof, Creole Portuguese and other languages for the choir, accompanied by Rose’s sabar drum ensemble. Jouga did not confine the choir to Christian pieces; it also performed compositions such as ‘Wallaye,’ based on a local Muslim melody. Rose and Jouga used the choir to give the youth of Medina, a popular neighborhood, a career in music; with the choir, they toured five continents. 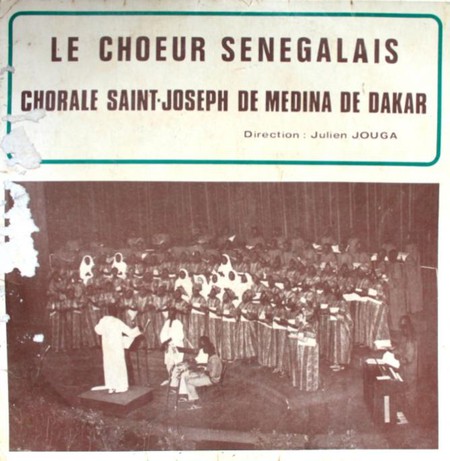 Live recording of a Saint Joseph Choir of Medina concert in Dakar, 1972, led by Julien Jouga and Doudou N’diaye Rose

Doudou N’diaye Coumba Rose was also revered as a person of great knowledge and integrity who contested conventions he considered outdated. His large- and small-scale drum ensembles, most importantly the Doudou N’diaye Rose Orchestra and his Drummers of West Africa, comprised not only his children and grandchildren but also many drummers who did not come from griot families and thus were not supposed to play the sabar. He went even further and trained his daughters, granddaughters and other women to play the sabar drum in the 1990s, and he founded Senegal’s (and some say the continent’s) first female drum ensemble, ‘Les Rosettes,’ which later joined him on his world tours.

Members of his drum ensembles recount how Rose could hear and locate any false note during their performances, even if he was conducting hundreds of drummers playing a variety of complex rhythms simultaneously; he would turn around and make eye contact with the musician who strayed from the path in order to bring her or him back on track. The transmission of knowledge to younger generations was at the center of his efforts, and over the course of his career (spanning eight decades), he trained and employed hundreds of musicians. From the 1990s onward he advocated for the opening of an international drum academy in Dakar under his chairmanship, but the government never granted the necessary funds for his project.

While placing great emphasis on the importance of maintaining and reinventing traditional rhythmic repertoires and languages, Rose effortlessly crossed the supposed boundaries of traditional and contemporary music or defied them altogether in his works. He was a fan and supporter of many young Senegalese rap talents (he collaborated with the first hip hop collective in the country, Positive Black Soul) and always stressed the continuity between sabar rhythm, the accompanying vocals and the local rap style that emerged in the 1990s. He introduced the sabar sound to the legendary Orchestra Baobab’s early repertoire (heard on the Une Nuite Au Jandeer live album from 1978, for example), collaborated with Dizzy Gillespie, Miles Davis and the Rolling Stones, and could find a musical common ground for his compositions with just about any genre. He influenced and collaborated with countless musicians all over the world over the course of his career.

Rose passed away on August 19th, 2015, one day after attending the funeral of his good friend Vieux Sing Faye, another of his generation’s exceptional percussionists. Soon after Rose’s family announced his death, traffic came to a standstill, as the streets of his neighborhood filled with thousands of people waiting to visit his house and pay tribute to one of the most important cultural figures in the history of Senegal.