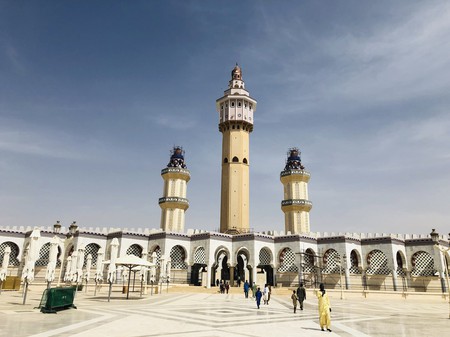 The marble courtyard of Touba's Great Mosque holds up to 60,000 worshippers during Friday prayers

From humble hamlet to Senegal’s second-biggest municipality, the holy city of Touba has flourished while staying true to its founder’s vision.

From Café Touba (spiced coffee) to Touba Oil, the name Touba is everywhere in modern-day Senegal, but in 1887 it was little more than a hamlet. That year, Cheikh Ahmadou Bamba, founder of the Mouride Islamic brotherhood, chose this tiny Sahelian settlement as the basis for his dream: a community free from colonial influence, which was centred on his religious beliefs and respected the values of courtesy, hard work and pacifism.

Named Touba – after a tree of Paradise in Islamic teachings – this humble community became the spiritual home of Mouridism, the largest of Senegal’s four Sufi brotherhoods with an estimated 5 million followers. In the 90 years since Bamba’s death in 1927, Touba has grown from a village to a town to Senegal’s second most populous city and is showing no signs of slowing down: the population doubled to 1.5 million in the last decade alone.

Home to the biggest mosque in West Africa, it is host to one of the world’s largest pilgrimages – mentioned in the same breath as Mecca. The rise of ‘la ville Sainte’ (the holy city) is made all the more remarkable by its stringent alignment to Bamba’s original ideals – beliefs that give Touba its unique charm and identity today. 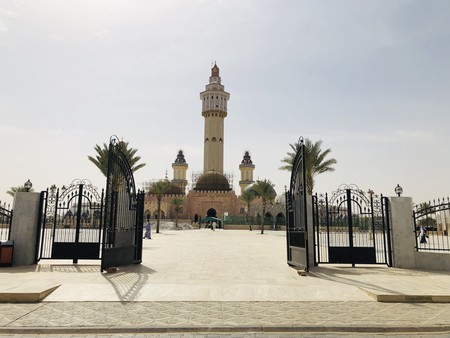 At first glance, Touba seems like any other Senegalese city: market stalls jostle for prominence with shop fronts, colourful boubous mingle with Western T-shirts, battered cars honk at equally battered taxis. The towering minaret of the Great Mosque aside, it could be anywhere. That is until you take a closer look.

Touba is the only city in the world where both alcohol and cigarettes are banned, which seems to have had an effect on the cleanliness of Touba’s streets. The central square – the beating heart of the city – is almost devoid of rubbish, with modern public bins not only well placed, but well used, which is just as well given that many of the Toubaois go about their daily lives without shoes. Needing to remove them to enter most major buildings, some decide to eschew them altogether or don specialised hardened socks purchased at a market stall. 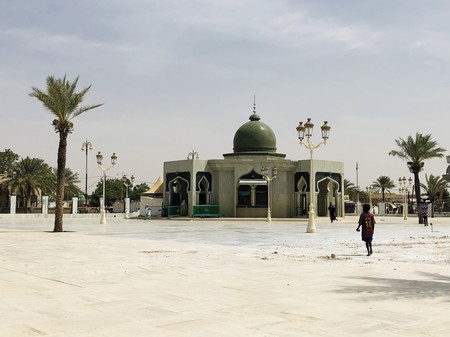 It’s not hard to find the Great Mosque: already one of the largest mosques on the continent, it lies at the epicentre of the city with all major roads leading to it. Completed in 1963, its 87-metre-high central minaret watches over the city like an opulent lighthouse. Its marble façade and jade domes shimmer in the sun.

The main entrances are found at the west and east, where a local ‘guide’ will likely offer to escort you through the Mosque. Take them up on it. They are not only a guide, but a chaperone, Mouride encyclopaedia and guardian, ensuring you do not fall foul of any disrespectful faux-pas (selfies with a man and woman, for example). Meanwhile, men, women and children inhabit the intricate network of prayer rooms, wash rooms and interior chambers, praying, resting and reflecting. The Mosque – despite its splendour – is not an attraction, but a fundamental part of daily lives. 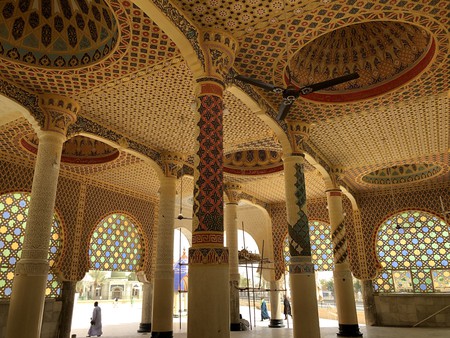 Touba’s population swelled after Cheikh Bamba died and was laid to rest in the Great Mosque, with many of those making the journey to pay their respects ending up as residents. Today, his mausoleum remains one of the most popular sites during the pilgrimage of the Grand Magal, followed by those of his three sons that stand resolutely in the vast marble courtyard by the East Gate. 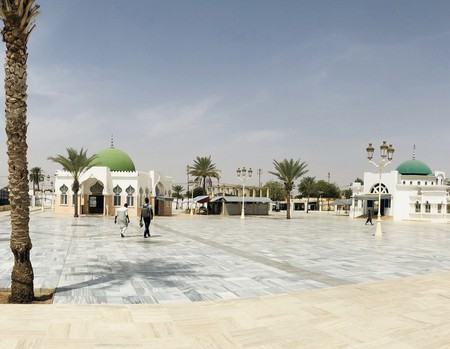 The final resting place of Mourides from all over Senegal, Touba’s cemetery is an endless warren of graves, tombs and mausoleums. Some – like the imposing mausoleum of Cheikh Ibrahima Fall and his descendants – are bigger than houses, while others are simple furrows in the sand. Many locals visit the cemetery on a daily basis and will gladly guide you through overcrowded (and often dead-ended) pathways, explaining a much-needed history of those buried there. 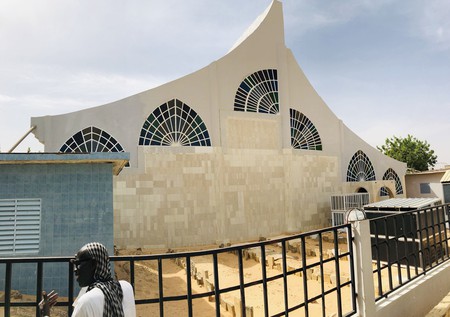 Some mausoleums in Touba’s cemetery are rather large, like that of Cheikh Ibrahima Fall | © Beetle Holloway / Culture Trip

A stone’s throw from the East Gate lies Touba’s library. Dedicated to Islamic teachings, it is home to more than 30,000 copies of the Quran, as well as rows upon rows of the different Cheikhs’ writings, poems and original journals. Reading rooms offer visitors the chance to learn in Arabic, French or a small selection of other languages, while the Library boasts the personal collection of Cheikh Bamba himself (including the Quran he took with him in exile) as well as a number of Qurans donated by visitors, including Muhammad Ali and the former Palestinian PM Yasser Arafat.

Following the recent completion of the Thiès-Touba autoroute, getting to Touba has never been easier. The 115-mile journey from Dakar is a virtual straight line through dusty scrubland and takes a little over two hours and 30 minutes.

With no towns, shops, petrol stations or even exits, the autoroute is the preserve of private vehicles and is apocalyptically clear. Local buses and sept-places (local inter-city taxis) use the pre-existing routes nationales in order to drum up business and avoid the 2500 CFA (£3.30) toll, so be prepared for a four-hour drive.

Plan a day trip – given there are no hotels, set off from Dakar, Thiès or the Petite Côte in the morning and head back in the evening.

Rent a car (and driver) – the autoroute is quicker and safer, while there is lots of parking in Touba by the East Gate.

Eat well before you go – if coming from Dakar, consider stopping off for a meal in Thiès on the way (and way back).

Dress appropriately – long trousers for men and floor-length skirts for women (trousers are not acceptable). Women will also have to cover their heads to enter religious sites.

Smile and ask – as a foreigner, you will get more looks here than in other places, but the people of Touba are proud of their city, heritage and culture and are more than happy to share. When standing outside a site, ask a local ‘if it’s ok to visit’ and they’ll usually show you around.

Bring small bills – people will be more than happy to help you out, but sometimes a 500CFA (£0.66) small tip goes down well.

Don’t go on Fridays – unless you want to share the central square with the upwards of 60,000 worshippers who come for afternoon prayers.

Stay hydrated – even if not a sunny day, there is no coastal breeze in Touba and the heat can be overwhelming.