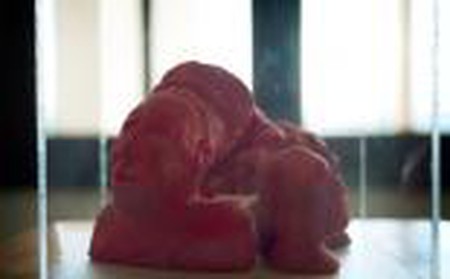 In 2006, the palace that had been built for King Mutara III Rudahingwa in 1957, and had seen numerous incarnations since, was converted into the National Art Gallery of Rwanda. Bringing international contemporary art to the country, and promoting current artists living and working in Rwanda, the museum is a unique institution in the country. Anna Kućma visited for the Second International Art Exhibition.

Walking into the National Art Gallery in Nyanza for the Second International Art Exhibition, the first thing that draws the viewer’s attention is a line of busts, some tall, some short, and all made of wood and clay. These heads, each long face somewhat resembling the next, are sculptures of the last three kings of Rwanda, Yuhi V Musinga, and his two sons, Mutara III Rudahingwa and his brother Kigeli V. The sculptures are the result of the International Sculpture Workshop directed by Dr. Lillian Mary Nabulime, Peterson Kamwathi and Madrad Bizimana, and they are now on display in an exhibition titled ‘Kingship and Kinship’ in the gallery’s main hall on the ground floor. They were displayed alongside an array of sketches and case studies showing the process that their creators went through while making them. Three papier-mâché masks hanging on the wall stood out, as did small maquette heads made of red clay showing the evolution from sketch to sculpture. The faces, true to the photographs that inspired them, were characterized by long protruding teeth and mournful expressions. 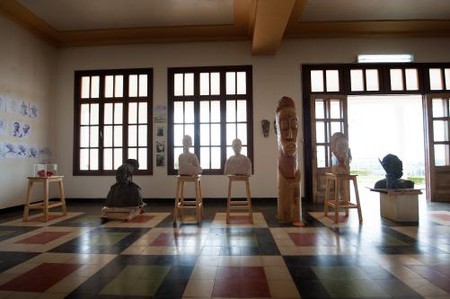 ‘Kingship and Kinship’, at the Rwanda National Art Gallery | © Will Boase / ADDIS RUMBLE

These kings don’t sit here by chance. The building of the gallery is located on Rwesero Hill in Nyanza, Southern Province, which historically was the royal capital of Rwanda. From the end of the 19th century up to 1961 the Kings had their palaces on a neighboring hill named Rukari, and the current palace was built for King Mutara III Rudahingwa between 1957 and 1958. Unfortunately the King died unexpectedly in 1959 and never had a chance to live in his beautiful palace. For many years the palace housed different governmental offices, before becoming the National Art Gallery in 2006 under the Institute of National Museums of Rwanda (INMR).

The location of the place is wonderful, perched high on a hill looking out over a view of Rwanda’s famous thousand hills. Architecturally it is also well suited to its current role. Its palatial intentions is manifested in spacious rooms now used as exhibition spaces. Large windows flood the rooms with natural light and make viewing the artworks easy and clear. 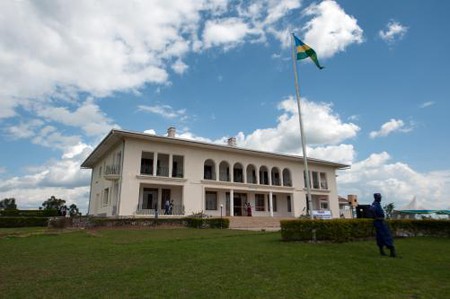 In Nyanza it is slowly becoming a tradition to celebrate the International Museum Day with the opening of the annual International Art Exhibition. In 2012 Lia Gieling, the curator of the National Art Gallery, invited South African Pieter Hugo to display his remarkable ‘Rwanda 2004: Vestiges of a Genocide’ project, of which a few striking images are still on display. The artist donated the whole series to the gallery’s collection, which alone makes a trip there worthwhile. On display alongside Hugo were Dutch photographer Andrea Stultiens with ‘The Kaddu Wasswa Archive’, and Collin Sekajugo, who presented photographs of the sculptures from his Weaver Bird Arts community project in Masaka, Uganda.

The artists present in this year show do well to match the standards set last year. Dr. Lillian Nabulime is a Ugandan sculptor whose work is inspired by the ways in which issues such as gender equality and disease, particularly HIV-AIDS, affect her life in Uganda and elsewhere. She covered a third of the gallery’s main room with her eclectic work, including a charming set of wall-mounted relief sculptures of children and a tall statue of a woman surrounded by symbolic sacrificial offerings such as melted condoms and seeds. 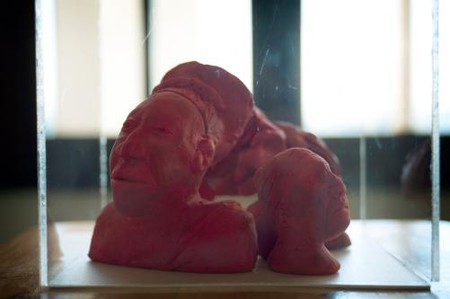 In the gallery’s far end Peterson Kamwathi is presented. Kamwathi is a Kenyan artist rapidly gaining international recognition for his charcoal drawings. From the mess and chaos of smudged carbon emerge delicate and eloquent caricatures of everyday people. In a departure from his previos work, he’s begun exploring ways to transform his drawings into sculptures. A crowd of those sculptures rises by the window.

The center of the main gallery is occupied by Rwandan Medard Bizimana’s sculptures, made using metal, volcanic rock and crystal. Each piece occupies its own pedestal within a tightly spaced area, creating a somewhat confusing thicket of work. 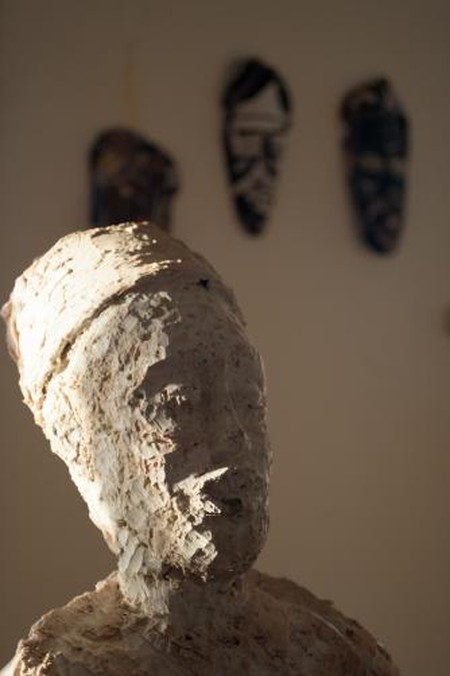 Photography remained an important part of this year’s exhibition. On the first floor of the gallery visitors will find ‘Photography from East, West and South Africa’, presenting the work of three outstanding contemporary African photographers. Sammy Baloji filled a small room on the side of the main space with works from his series ‘Mémoire’ (2006). These large prints, each spanning over a metre, consist of washed-out colour images dealing with the Congolese colonial past. Baloji uses powerful photomontages combining archival images of exploited workers with fresh pictures of today’s devastated and rotting industrial landscapes in a powerful statement about the links between past and present.

Santu Mofokeng – often lauded as the most influential South African photographer of our time – is one of the artists in the German Pavilion in the 2013 Venice Biennale. Mofokeng’s quiet, dreamy black and white images are starkly juxtaposed with the work of Uche James Iroha, a Nigerian photographer living and working in Lagos. Iroha documents the life of the city together with other members of the Depth of Field Collective (which he founded in 2001) and for this exhibition he presents his series from the slaughterhouses of Lagos, entitled ‘Fire, Flesh and Blood’. 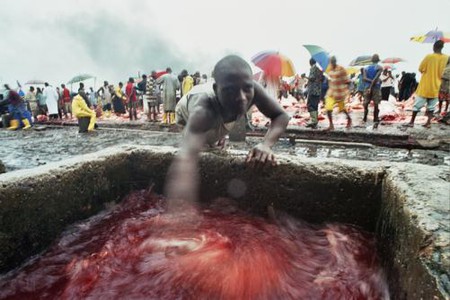 All of the works on display in the show offer critiques of contemporary African issues and express their views plainly with no need for long-winded introductory texts. However the exhibition fails to provide any background information about the artists or their work, which could make the general narrative unclear to some.

All three photographers are `laureates’ of the renowned Dutch Prince Claus Fund, which supported the exhibition as well as making it possible for Mofokeng and Iroha to be present at the opening.

The exhibition was opened by the Minister of Sport and Culture, who cut a ribbon in the colours of the Rwandan flag after a program of speeches and dancing. During her speech Dr. Lillian Nabulime highlighted the importance of workshops as a form of collaboration between artists and an opportunity for people to learn from one another. It strikes me as especially important to create opportunities for artistic exchange and collaboration in countries such as Rwanda, where formal art education is almost non-existent. Workshops are a process-orientated way of exploring any medium, and this particular one created an opportunity for its Rwandan participants to gain experience of working with international names in a familiar setting. 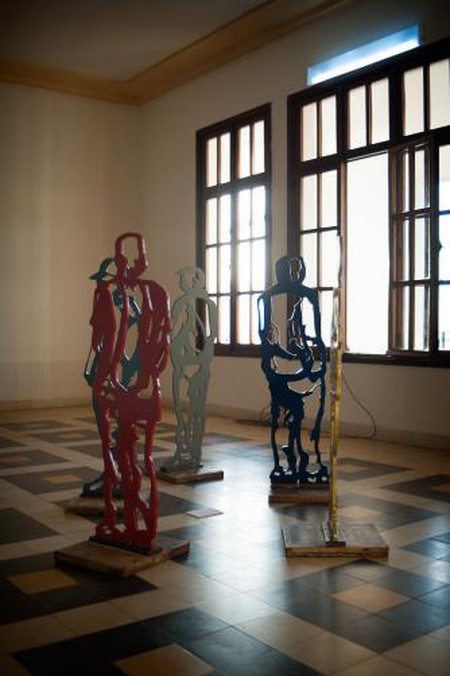 The afternoon’s most engaging speech was given by the then director of the Goethe Institute in Kigali, Peter Stepan, who delivered a ringing endorsement of art and culture’s place in society, especially for developing economies. He argued that no city without cultural life could expect to attract or retain the best workforce, because those people are by their nature enthusiastic consumers of cultural and artistic creations.

His point that culture should be regarded not as optional, but as a necessity in encouraging and sustaining economic growth and radical social change, is particularly relevant in places such as Rwanda, and should form a central pillar of any country’s growth strategy. In East Africa there is an ongoing underrepresentation of art that comes from other African countries, not to mention other continents. Stepan’s speech was particularly apt at the opening of an all-African contemporary tour de force, and the importance of this art exhibition in the National Art Gallery in Nyanza cannot be undervalued. It brings together artists who are internationally recognised and yet in Africa seldom heard of outside of their home countries. It is only through the involvement of places such as the National Gallery that this will start to change. Though the show was perhaps a bit chaotic, the exhibition opens routes of visual exchange and broadens the horizons of viewers whose appetites will only grow with exposure.