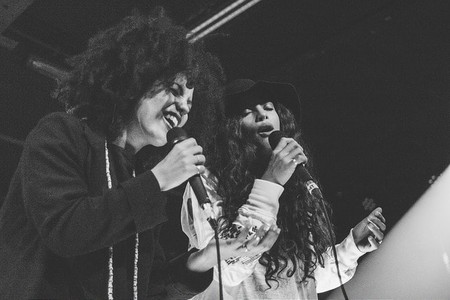 Eccentric, spiritual and soulful are just some of the words used to best describe the essence of Ibeyi – the French/Cuban/Venezuelan musical duo consisting of exceptionally talented twin sisters Lisa-Kaindé Diaz and Naomi Diaz. Here’s everything you need to know.

The duo came under the limelight after XL Recordings boss Richard Russell saw a YouTube video of them singing their single ‘Mama Says’ in 2013 and signed them. They deliver an Afro-Cuban sound inspired by Yoruba tradition, perfectly blended with electronic tunes to produce what they describe as “contemporary negro spirituals”.

The 23-year-old pair – ‘Ibeyi’ meaning ‘twins’ (pronounced ‘ee-bey-ee‘) – were born in Cuba to the famous Cuban percussionist of Yoruba descent Anga Díaz, who had received a Grammy as an accomplishment for his work with the Latin jazz band Irakere and was also a member of Buena Vista Social Club before his death in 2006. Their mother, French-Venezuelan singer Maya Dagnino, serves as their manager, and encouraged the duo from their early teens to pursue a career in music.

At the age of 11, Naomi learned to play her father’s signature instruments – the Peruvian/Cuban percussion instruments cajón and Batá drum – while her sister Lisa-Kainde focused on songwriting. Together, they studied Yoruba music, which comes as an inspiration from the Yoruba tradition brought to Cuba from Nigeria and Benin by their ancestors who were taken as slaves in the 1700s. Yoruba songs had always been an integral part of their lives, as their mother sang them to them as children, and today they accompany their unique sound.

In 2014 the sisters released two singles,’Oya‘ and ‘River,’ later releasing the third video with Jools Holland on BBC 2 for their single ‘Mama Says.’ In addition to touring globally for promotions, the twins appeared as guests on jazz composer and multi-instrumentalist Alfredo Rodriguez’s Tocoro album, as well as featuring in the short film for Beyoncé’s album Lemonade. In June 2017, the duo revealed a pre-release single, ‘Today Today,’ followed by their sensational album Ash in September, featuring a blend of electro-acoustic, Afro-Cuban and Yoruba sounds with evident contemporary influences from Kendrick Lamar, Jay Electronica, Erykah Badu and Nina Simone.

Nigerian culture and history elsewhere in the world

With the creative influence of Nigeria felt around the globe, the importance of Yoruba spirituality – a key element of Nigeria’s identity – is gradually gaining acceptance and finding its way back into modern-day society and the music scene. The country’s rich cultural heritage and creative influences are being displayed to the world at large.

Beyonce notably channelled the Yoruba fertility goddess Ọṣun at the 2017 Grammys and in her visual album Lemonade. There are also a number of best-selling fantasy books featuring stories from the Yoruba mythology – Tomi Adeyemi’s Children of Blood and Bone is set to air as a trilogy on the big screen, while Lupita Nyong’o has since adapted the award winning book Americanah by Nigerian writer Chimamanda Ngozi Adichie for a miniseries.

In the world of fashion, Nigeria has proved a source of strong sartorial statement for Hollywood stars: Rihanna, Solange Knowles and Dawn Richard to mention a few have worn designs from Nigerian designer Deola Sagoe, while Thandie Newton, Angela Simmons and others have been styled by Nigerian designer Jewel By Lisa.