This is the Real Story Behind Nigeria’s World Cup Kit 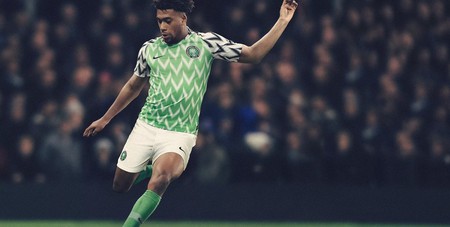 Back in February, Nike and the Nigerian Football Federation unveiled the most stylish football kit we had seen in a long time. The Nigeria home and away kits for the 2018 World Cup in Russia, has been voted the best out of the 32 teams that will participate in the tournament. The kit sold out just minutes after its official release on June 1, as hundreds of fans reportedly queued outside London’s Nike Town store on Oxford Street.

Everything you need to know about the retro-inspired kit

According to the Nigerian Football Federation, the stunning kit modeled by celebrity Nigerians—including footballers Kelechi Iheanacho, Wilfred Ndidi, and Arsenal’s Alex Iwobi, top chart musicians Wizkid, Not3s, and Tiwa Savage, photographer Yagazie Emezi, DJ Julie Adenuga, and music industry mogul Grace Ladoja—received more than three million pre-orders prior to its release. That placed it at record-breaking sales for an African team, even surpassing those of some of the biggest football clubs in the world.

The home jersey is more than just a fashion statement. Nike took inspiration ranging from the Super Eagles jersey to the 1995 King Fahd Cup—now known as the FIFA Confederations Cup. It also features some inspirations from the 1994 jersey the Super Eagles wore to play England in a friendly match at Wembley. The recolored badge is a tribute to the crest worn by the gold medal-winning ‘Dream Team’ of the 1996 season, when Nigeria became the first African country to win gold at the Olympic soccer event.

A Nation Of Kings & Queens 👑🇳🇬

Aside from the home and away kits, Nike also designed some other pieces for Nigeria ahead of the 2018 FIFA World Cup, which includes pre-match shirts, drill tops, bucket hats, and anthem jackets. There is also the travel suit, which features a bright green floral design, adding a fresh vibe with contemporary designs to the team’s look. Prices for these items in the collection range from N7,200 to N39,600 ($20 to $110).

However, the jersey, the away kit, the training kit, the floral joggers, and the training jacket are completely sold out and now unavailable on the Nike website. Nike has said it has no current plans to restock the items.

The Super Eagles of Nigeria took the world by storm at the 1994 FIFA World Cup in the United States. Nigeria went on to beat the likes of Bulgaria and Greece in the Group Stage. It had been 19 years since Nigeria won its last AFCON title up until the late Stephen Keshi’s team conquered Africa to win the title in 2013.

The Nigerian team will also be up against Croatia, Iceland and Argentina at the World Cup tournament games, scheduled to take place in Russia from June 14 to July 15, 2018.