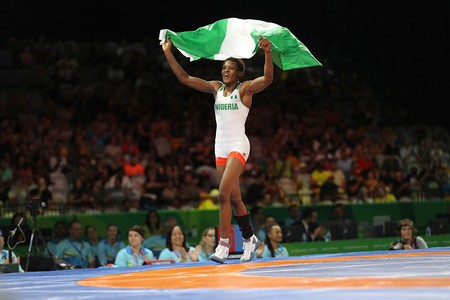 Odunayo Adekuoroye was heartbroken when she lost her position on the track team at 17 years old. Her coach at the time saw how upset she was and offered her another option so she could still travel with the team: wrestling. Adekuoroye hasn’t looked back since.

“I stayed in wrestling because I like to travel,” Adekuoroye says. “[Since] I first started, it’s grown a lot and more people are coming into wrestling.”

Adekuoroye won gold medals at the 2018 and 2014 Commonwealth Games, silver at the 2017 World Wrestling Championships in Paris and bronze at the 2015 Las Vegas edition. She represented Nigeria at the 2016 Summer Olympics in Rio de Janeiro, wrestling at 53kg (116 lbs). 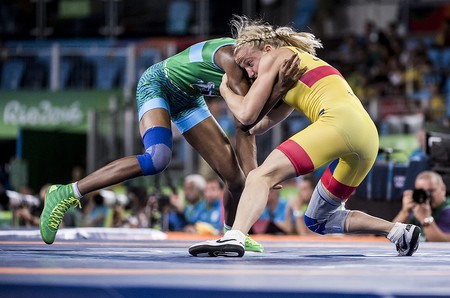 Like most of the world, Nigeria’s sporting scene is dominated by soccer. The men’s national team has qualified for six of the last seven FIFA World Cup tournaments and its no. 5 global ranking in April 1994 is the highest-ever by an African nation. The women’s national team has also found success, winning the first seven Africa Cup of Nations championships from 1991 to 2006, and a record 10 overall.

Though not as popular as soccer, wrestling has an extensive history in Nigeria. Chinua Achebe’s novel Things Fall Apart chronicles pre-colonial life in southeastern Nigeria and the arrival of Europeans in the late 19th century. In the book, Achebe describes young Igbo (formerly, Ibo) men holding wrestling competitions in their two styles: mgba and ebenebe.

In Fighting for Honor: The History of African Martial Art in the Atlantic World, T.J. Desch Obi cites oral accounts of Nigeria’s Edo people, which suggest that wrestling was initially utilized as a lethal martial art for survival, “but over time evolved into the more ‘sportive’ art of African wrestling.”

Elphinstone Dayrell’s Folk Stories from Southern Nigeria, a collection of folktales passed down orally in tribal communities, includes one narrative about a king’s son who appeared small in stature but was very strong when he wrestled: “When they saw the king’s son, whom nobody knew, they all laughed and said, ‘Who is this small boy? He can have no chance against us.’ But when they came to wrestle, they very soon found that they were no match for him.” 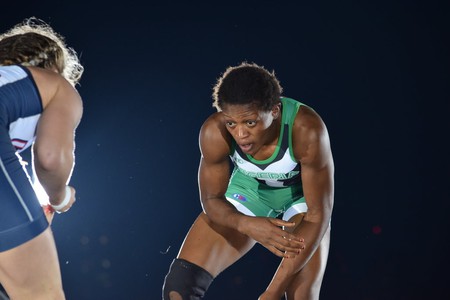 Wrestling saw a resurgence in popularity when Nigerian-born Daniel Igali won a gold medal at the 2000 Olympic Games in Sydney. However, Igali represented Canada at the Games after seeking refuge there due to political unrest in his homeland. He became a Canadian citizen in 1998. Regardless, Igali’s success helped propel the sport back to prominence in Nigeria, especially after he became president of the Nigerian Wrestling Federation.

“After he became federation president he put a lot of energy and promotion and new things into wrestling and that’s when it became popular,” Nigerian women’s head coach Purity Akuh says. “Right now we have some of the top athletes representing the country through wrestling.”

This trio represented their nation at the 2018 Beat the Streets wrestling exhibition in New York City in May. The event, which works to develop the potential of urban youth and strengthen NYC wrestling culture, features some of the most prominent male and female wrestlers in the world, including Americans Jordan Oliver, Jordan Burroughs, and Helen Maroulis. The American men’s team faced skilled Cuban opponents, while the American women battled the team from Nigeria.

“It’s a very great opportunity for the Nigerian team,” Adekuoroye says. “We are so happy and so excited to be part of Beat the Streets as the first African country.” 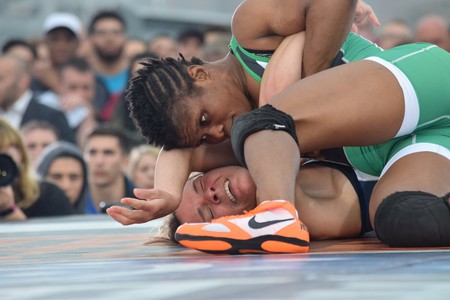 Results aside, the experience in New York City is certainly a positive one for the Nigerian women’s wrestling team as the program continues to expand and grow not only in Africa, but also internationally.

“I know our athletes will learn from this experience,” Akuh says. “Coming to the U.S. to wrestle is a big plus for their CV. Normally we hear ‘Beat the Streets, Beat the Streets’, but now we’re here. It will help us prepare for the World Championships later this year in Hungary (Oct. 22-28).