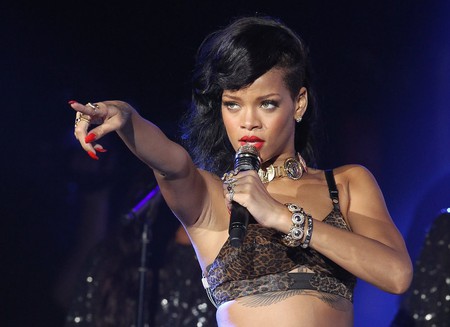 Rihanna posted a video of the kids dancing | © landmarkmedia/Shutterstock

If there’s one thing Rihanna knows, it’s how to dance.

The singer is famous for busting out her own moves but when she’s championing other dancers, you know they’re going to be the real deal.

So when she posted a video of a group of children dancing on her Instagram to celebrate becoming the first female singer to hit 2 billion streams on Apple Music, it was time to sit up and take notice.

But she’s not the only one who’s a fan of the Ikorodu Talented Kids, a group of kids from the slums of Ikorodu, Lagos.

when I found out that I was the first female artist to cross 2 billion worldwide streams on Apple Music! God is too lit!!!!

Naomi Campbell and Diddy have also been showing their love on social media by posting videos of the children dancing.

The group was set up by Dream Catchers, an organisation which teaches slum children to dance and gives them a home.

Founder Seyi Oluyole told BBC Newsbeat: ‘As a teenager, I had slept on the road a couple of times due to some financial issues my family was going through.

awww my Lil squad…..I love YOU guys! I speak on behalf of the entire social media when I say this… you really brought a pure joy to our spirits just by seeing how happy you are when you dance! You personally made my day! Keep up the great work kids! ❤️ (see previous post)

‘Hence my passion was born to help other children.’

Ikorodu Talented Kids is made up of nine children aged between six and 15-years-old.

Their Instagram page is full of videos of them dancing to music by stars like Wizkid, J Balvin and Big Shaq.

But most of them had no idea who Rihanna was up until a few days ago.

Seyi said: ‘We’ve tagged [posts] and tried to get the attention of so many people, it never worked. But this one just happened.’

After RiRi shared the video of the kids dancing, other celebrities including Naomi Campbell soon took notice with the supermodel posting: ‘Dancing QUEENS… can’t wait to meet you in person.’

‘Considering their backgrounds, most of the kids did not really know them [the celebrities],’ says Seyi.

‘The whole idea that the person who saw the video is a celebrity in another country is what they loved the most. We had some tears when I explained what it meant.

This one is big friends and Fam! Please! Help us tag @jbalvin As much as possible till he sees it! We are ready to show the world that Street kids can make a difference and there is hope. If you are watching this, kindly hit the follow button! There is a full video! The link is in our bio. Music: Machicka By: @jbalvin @jeon_arvani @anitta #Machika #machikachallenge #NaijaDance #Ikorodutothe🌍 #NWe #chopdaily #afrodance #talentedkids

‘A lot of us cried because it’s like the moment we’ve always been waiting for might be here.

Rihanna’s post has now given them hope they might go on to even better things – but not before they do their homework.

The kids are only allowed to rehearse once they’ve done their schoolwork.

‘To change the world through dance and be on stages like the Grammys, BET and MTV. They also hope to meet the likes of Serena Williams and Oprah.

‘Our vision is for every child to have access to a good education as far as a Bachelors and Masters degree. We hope the kids can attain this height of success through their passion; dancing and acting.’

We think they’ve got what it takes. You only have to take a look at one of their videos to see how ridiculously talented they are. Over to you, Oprah.