Colonialism And Cultural Hybridity: An Interview With Yinka Shonibare, MBE 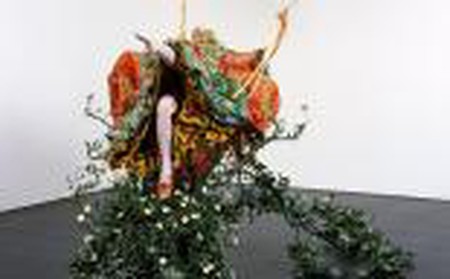 Yinka Shonibare, MBE ‘The Swing (after Fragonard)’ 2001, © artist. Courtesy of the artist and Tate Collection, London.

Yinka Shonibare, MBE needs little introduction. A multi-disciplinary artist whose oeuvre encompasses installation, screen prints, painting and video, he is most widely known for his sculptures of headless figures dressed in 18th century costume; although this costume has been subverted by the use of vibrant ‘African’ textiles.

Being British-born, growing up in Lagos and going on to study and live in London, it is clear that Yinka Shonibare’s work has been heavily influenced by his own past, exploring ideas of cross-cultural heritage and the creation of a hybrid identity. Influenced both by the aesthetics of Romanticism in Europe and African textiles, this interplay between historical European and African visuals further creates a complex dialogue around the politics of colonialism and post-colonialism. Some works are recreations of paintings, such as The Swing (After Fragonard) (2001), and Mr and Mrs Andrews Without Their Heads (1998), based on the eponymous Gainsborough painting. Others are entirely original compositions that still evoke the weight of European history through the use of classical aesthetics. 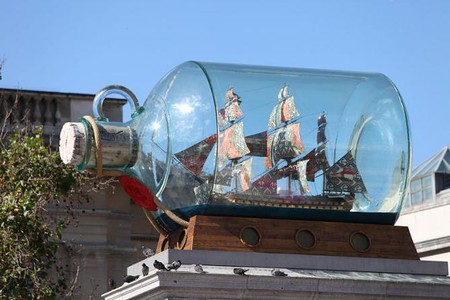 Read simultaneously as a celebration and a condemnation of the past, Shonibare’s playful yet intricate work avoids didactic statements and never clearly states a position; as Shonibare says himself, ‘there’s no anger…so I can have fun with it’. Here, the Turner Prize-nominated artist shares some of his insights into his past, his works, and his thoughts on aligning the personal with the political in his art.

Culture Trip: Growing up in Nigeria but living in London, do you feel you identify more with Nigerian or British culture? And where to you feels like home?

Yinka Shonibare: I don’t think it’s a question of choice. Growing up in Lagos there was a big awareness of British culture; I always visited London regularly, and it has never felt like an alien place. People would go over there quite a lot, and in school after the holidays there was always a certain cool around the people who came back with Harrods bags. London is this big mix, and there are a lot of Nigerians in London; it has always felt like a home from home. I don’t think I’ve ever really had to categorize myself as one or the other.

CT: One of the key themes you address is cultural identity. As an artist of dual nationality, how do you align the personal with the political in your work? 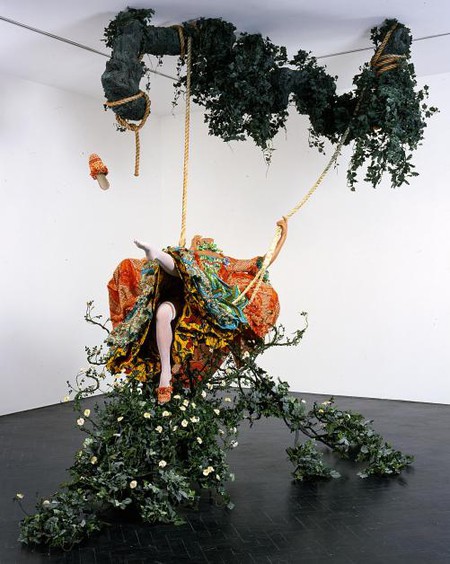 Yinka Shonibare, MBE ‘The Swing (after Fragonard)’ 2001, | © artist. Courtesy of the artist and Tate Collection, London.

YS: I think it’s more through personal motivation, coming from a mixed background and not wanting to define myself by one nationality. There are these binaries: Nigerian or British, and people seem quick to try and define things. There seems to be a tendency to try and make people choose, to come down on one side of these binaries. My work addresses the idea of having this fusion or hybrid cultural identity and what that produces. People always want to categorize things: I’m much more interested in this idea of a hybrid. As I work for myself I don’t have to answer to anyone; I can operate with this agency and not have to make these decisions.

CT:A large proportion of your work plays on 18th century British aesthetics and costume. Do you see your work as a criticism or celebration of British culture at this time?

YS: Again, I don’t think I’m making a decision. Some people see my work as a celebration of the British colonial rule and some people see my work as a critique of it, and it’s not either. A lot of people saw Nelson’s Ship in a Bottle [the 1:30 scale model of Nelson’s HMS Victory, that sat on the Fourth Plinth from May 2010 to January 2012] as a celebration of Nelson’s campaign of colonization, but again, I was not necessarily making a definite statement either way. It’s about raising questions rather than answering them. I’m not a member of any political party; I maintain agency. There’s a freedom that comes with that, so I can use these aesthetics without having to define my opinion on them. With my name as well – having this MBE – a lot of people wonder if this is an acceptance of it, or an ironic gesture; when I think it can be both, actually. In a lot of my work it’s important that there is this ambiguity, that it doesn’t answer these questions and that there is no definite statements being made. So it’s more a type of poetry; it’s a poetic statement.

CT: Since you began working, African textiles seem to have become increasingly fashionable in design and fashion spheres. Do you think their growing ubiquity changes how your work is received? 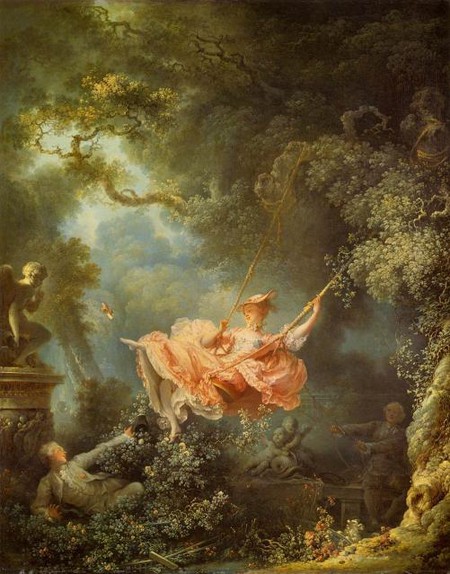 YS: You know they may be more fashionable now, but these are fabrics that have been around for a long time. I’m using textiles that have existed for centuries, so maybe there is more awareness of them but I’m not doing anything new here. We might be seeing more and more of them, but whether it changes the way people see my work, I don’t know.

CT: Humor is a strong element in your work. Is this to diffuse the overt political element of your work?

YS: I think that’s mostly from my personality, and the fact that I am not part of a particular political party. I have no anger about anything, so there’s no anger to my work. If I was member of a party, or if I was really angry and felt strongly I had something to say, then I would. I’m not making these definite political statements; because I have agency, I can be playful, and there is this playfulness to the work. I’m not trying to categorize or to say anything definite. I have a lot more freedom, and there’s an indulgence that goes with that, so I can have fun with it.

CT: You often use mannequins that have no face or head in your work – could you explain this decision?

YS: Yes, it’s a direct reference to the French Revolution, and the guillotine; when they would chop people’s heads off. A lot of people see my use of these figures as a celebration of this movement; that I am celebrating this overturning of power but it’s not necessarily, and there is this ridiculous element to the figures as well.

CT: Your work is often inspired by specific political events, such the Fabric-ation show at the Yorkshire Sculpture Park. How much do you wish your work to be read as a reaction to particular events or moment in history, or do you want your work to be timeless?

YS: I don’t think there is any problem with fixing your work to a specific moment in time when history was made. Because ultimately, the work will date. Art will always have been created at a particular time, so it will always contain these references within it. I don’t mind tying my work to these particular moments, so long as there is more; something else is in there and something else is produced.

CT: What do you think of western representation, exposure and understanding of African art at present?

YS: In the art world there are always trends and things going in and out of fashion. You know, recently Chinese art was a big thing, whereas it’s not so much now. So African art goes in and out of fashion, and there are these moments of interest; right now there seems to be a lot of interest in African art. It’s also because of the growing economy over there; six of the ten fastest growing economies are African countries. And with music too: Afro-beat is now a global phenomenon. So there is a lot going on over there, I was over in Lagos recently and it’s a really vibrant scene. There is a lot of money in Nigeria right now; a lot of people are making a lot of money over there, so there is a lot more cultural production and support for it.