The Rising Nigerian Afrobeat Artists You Should Know 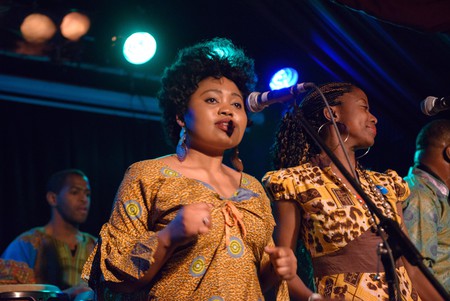 Afrobeat is a Nigerian genre of music that incorporates elements of jazz, funk, and traditional West African rhythms. Nigerian musician Fela Kuti coined the term after this style of music rose to popularity in the 1970s. Fast forward to the present day, where Afrobeat has widened its cultural audience, with artists continuing this musical tradition with contemporary influences. It doesn’t matter whether you can understand the words — feel the music and let your body move accordingly. We profile eight Nigerian Afrobeat musicians you should know.

An artist whose music is best-described as high energy, Wizkid’s ‘Pakurumo’ is both catchy and fun, regardless of whether you understand the lyrics. Be sure to listen to ‘Caro’, featuring Starry and L.A.X., as well as ‘Wiz Party.’ While Wizkid’s brand of Afrobeat is less influenced by discernible elements of jazz or funk, you can guarantee that you’ll move to the music.

To his friends and family he is Enetimi Alfred Odon, but on stage he becomes Timaya. Timaya is a Nigerian singer and songwriter best known for his summer single ‘Bum Bum’ (2012), which was then remixed by soca star Machel Montano. His latest album, Epiphany, features this remix amongst other club favorites. One listen and you won’t be able to keep from shaking your ‘Bum Bum.’

This Nigerian-born businessman, singer/songwriter, and harmonica player is a fan favorite who has won numerous awards from the MTV Europe Award for Best African Act to a BET Award for Best International Act. Amongst his more famous songs is ‘Oliver Twist,’ which incorporates electronic dance music into an intense Afrobeat. Listen above.

Actress, singer/songwriter, and recording artist Tiwa Savage is known for her upbeat tempos and storytelling lyrics. Tiwa Savage has released two albums thus far, with tunes such as ‘Eminado,’ ‘Kele Kele,’ and ‘Without My Heart.’ While there’s no word on whether she’s currently working on a third album, a good song is timeless.

David AdeDeji Adeleke, known by his stage name, Davido, is a soulful, Nigerian-American R&B singer who mixes a range of tempos in his music. Fan favorites include ‘Gobe’ and ‘Aye’ and higher-tempo tunes such as ‘Skelewu.’ Check out his music below.

Eddirisa Musuuza, aka Eddy Kenzo, is a singer who gained notoriety in 2009 when he collaborated with Mikie Wine on a song called ‘Yanimba.’ His music pays homage to his home country and the people who inhabit it, exuding an authentic, soulful feel. Listen to ‘So Good’ above.

P-Square is a musical duo comprised of identical twin brothers Peter and Paul Okoye. P-Square is known for their R&B mixes such as ‘Chop My Money,’ ‘Personally’ and ‘Beautiful Onyinye.’ Their music holds true to the sounds of Afrobeat, but incorporates contemporary rhythms popular in electronic dance music. Whether you’re a fan of Afrobeat or EDM (or both), we’re pretty sure you’ll be dancing along.

Martins Okey Justice, known by his stage name J. Martins, was born in Nigeria and developed a love for singing at a young age when his mother took him to church. J. Martins has worked with several Nigerian artists such as Timaya and P.Square.