Between Tradition And Taboo: The Music Of Malouma

The musical scene of Mauritania is laden with tradition, and Malouma’s blend of the traditional and blues-infused sounds was a radical departure. Pioneering in both her style and her political stance, Malouma Mint Moktar Ould Meidah has used her lyrics to campaign against AIDS, discrimination against Afro-Mauritanians, and the oppression of women. Now a senator in her country, she nonetheless states, “I was born an artist above all.” 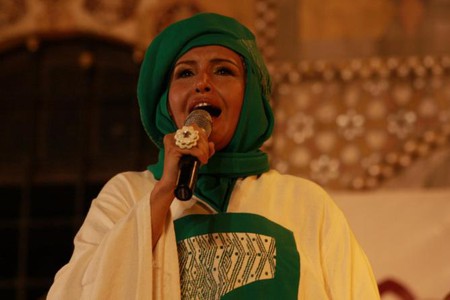 Mauritania is the geographical bridge between North and West Africa, and its music has always been defined by such divisions. In a scene that adheres rigorously to the rules of tradition, there are three distinct branches of music-making: Al-bayda, the white way, produces delicate and refined sounds, more aligned with North Africa; Al-kahla, the black way, is tied more to roots and masculine sounds of Sub-Saharan African music; whilst l’-gnaydiya, the mixed or ‘spotted’ way, combines the two. Yet when the Mauritanian musician Malouma started making music that blended the traditional and the modern, backed both by the tidinit and the blues guitar, it was unlike anything that had been produced before in the country. 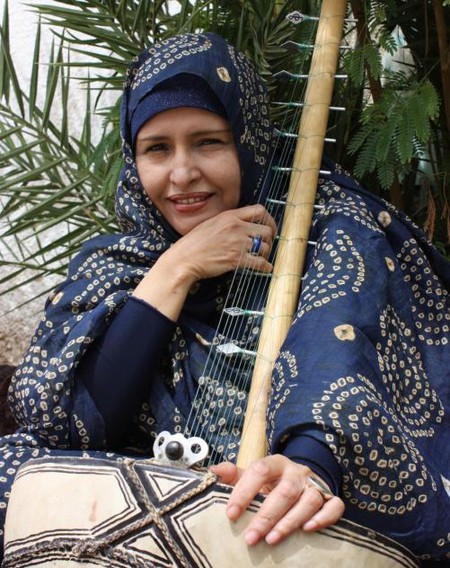 Malouma Mint Moktar Ould Meidah was born in 1960 in Mederdra (Trarza) into a family of griots. With a father who was a renowned traditional musician and poet, and a grandfather who was a renowned tidinit player, Malouma grew up in a musical environment, and from an early age was being taught the fundamentals of the ardin, or traditional harp. Along with being immersed in the music of Mauritania, though, Malouma’s childhood was spent listening to a broad spectrum of styles from various countries. With her father, she discovered Lebanese, Senegalese, Egyptian and Berber music, along with listening to some of the greats of the European Classical canon; Mozart, Wagner, Chopin, Beethoven. Yet it was her discovery of American blues, in her early teens, that was to revolutionize her approach to music.

Malouma had been performing with her father from the age of twelve. Her encounter with blues music, though, led her to take a change of direction, and at fifteen she began penning her own songs that fused her varied musical tastes. This approach was entirely unorthodox and largely original in her country, though it was her lyrics that got her noticed — albeit for the wrong reasons. Already at such a young age, Malouma had realised the power of protest that could be communicated and spread through music. Her songs addressed marriage, divorce and women’s rights, and became infamous in this conservative Muslim country.

Malouma’s musical career was put on hold with marriage, a union it seems she was not entirely happy to enter into: her official biography stating that ‘the weight of tradition pushed her into the fetters of marriage and conformism.‘ Nonetheless, in the mid 1980s she returned with renewed force, broadening the scope of her political manifesto to include lyrics addressing HIV, the vaccination of children, and illiteracy, among other topics. Most notably, she has been a vocal supporter for the integration of the Arab and Afro-Mauritanian communities: under President Maaouya Ould Sid’Ahmed Taya’s rule, discrimination against Afro-Mauritanians was becoming increasingly pronounced. Adopting such a stance saw her music banned from television and radio for over ten years; spots she recorded for UNICEF were censored, at one point even her phone lines were cut, yet this enforced silence and ostracization stifled none of her determination. 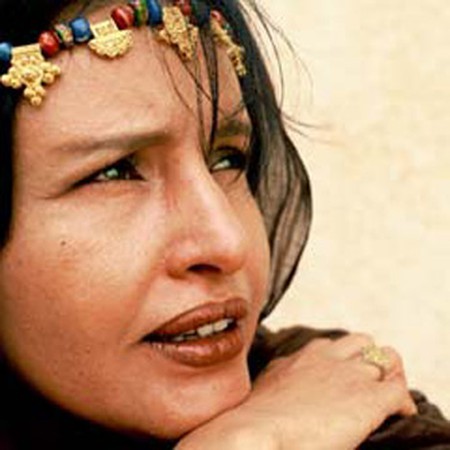 Malouma has produced three albums so far, Desert of Eden (1998) Dunya (2002), and Nour (2007), all released on labels outside of Mauritania. She has seen success and popularity abroad, performing across Europe and America. Yet in her place of birth her music continued to be banned until 2005, when the President was overturned in a military coup. The country then held its first official election in 2007, when Malouma campaigned and was elected senator for the country. Often described as a militant singer, she has nonetheless stated that the political role is largely an honorary position, above all providing her staunch campaigning with official status. For, as she herself has said, she is an ‘artist above all,’ and her stated aim to bring the music of Mauritania to the world — whilst demonstrating that tradition need not be puritanical — has been a resounding success so far. Malouma has herself reported that since the subsequent coup d’état in 2008, the situation in the country is declining to a state of oppression similar to that of before. Yet she hopes she can remain optimistic, and continues to speak out against the infringement of human rights in her native country. Enforcing social change, and sitting outside the three strands of conventional Mauritanian music, Malouma perhaps requires a new term: The New Way.