9 Artists You Should Know from Malawi 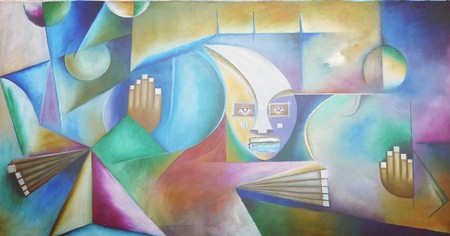 Malawi, a small country in Africa has naturally talented people who have helped to put the country on the map. This talent, which among other things is portrayed through art, has become an economic tool for the artists that are now traveling around the world to exhibit their work. The following are some of the visual and contemporary artists whose work is being recognized on the international scene.

Born in Blantyre City in 1980, Ellis Tayamika Singano is regarded as Malawi’s best visual artist. Singano was introduced to the world of art by his late father, Ellis, who was also a renowned artist. At the age of 18, when his father was hospitalized, Singano continued the paintings that his father left unfinished and started delivering them. Soon after, the artists started receiving positive feedback from his father’s clients who commended him for following his father’s style of painting. Singano was later on inspired by the works of artists like Pablo Picasso and Henri Matisse. In 2000 he began producing Batik Art and so far he has put on 30 exhibitions. Singano has exhibited his art at the contemporary African art exhibition in Yokohama, Japan in 2011, and the Myths of Malawi exhibit in Hamburg, Berlin, Hanover, and Tubingen in Germany in 2016. The artist teaches Batik Art at primary school for the deaf and Jacaranda school for orphans in Blantyre City. 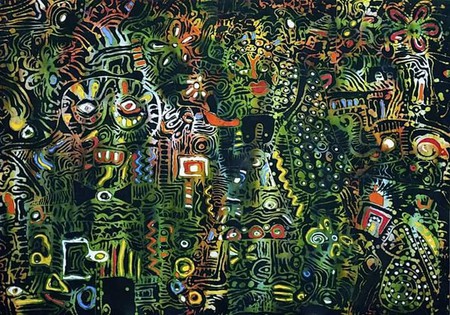 Another artist who has put Malawi on the map is Dalitso Disi who is currently making a name for himself in the United Arab Emirates. The visual portrait artist started drawing while studying at Malamulo Secondary School in Thyolo district, but gained his popularity when he started exhibiting his art work at Chichiri Shopping Mall and Sunbird Mount Soche in Blantyre City. During the adoption court case of the famous American pop star Madonna in Malawi (when she came to adopt her second child, Mercy James), Disi won a contract to sketch the court proceedings to be used for television news broadcasts around the world. Disi continues to fly the Malawian flag by drawing portraits of Sheik Zayid Bin Sultan Al Nahain, the king of United Arab Emirates, and Mohammed Bin Rashid Al Maktoum, the Vice President and Prime Minister of the UAE and ruler of Dubai. In 2010 when South Africa hosted the World Cup, Disi visited the country with the sole purpose of sketching portraits of the fans from around the world.

Nicknamed ‘The Pencil Assassin,’ Guy B Rapsy’s art is inspired by real-life situations. The artist from Blantyre City has become a household name with couples thronging to his studio to have their portraits drawn. The young artist who refuses to share his real name started pencil drawing at a young age and has so far made drawings of local famous people in the entertainment industry, like Wambali Mkandawire, Malawi’s celebrated musician. A former television presenter, who apart from drawing also paints, Rapsy aims to break through the international market which believes will enable him to be recognized outside Malawi. The artist prefers to create using charcoal pencils as opposed to the use of digital technology. Rapsy sells his artwork portraits, home décor, apparel, and wedding cards. 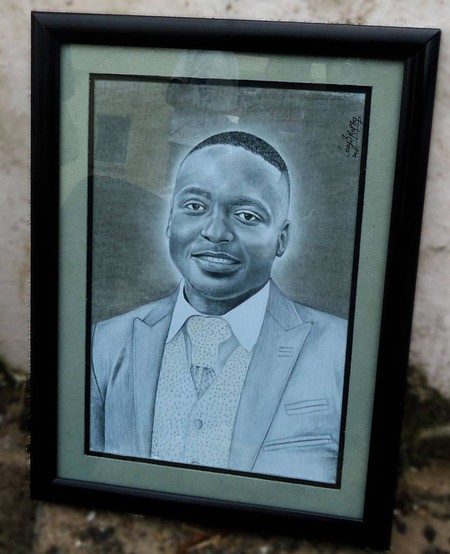 Son of one of the most celebrated visual artist in Malawi, Samson Namalomba, Kenneth Namalomba is a young artist whose future in the visual arts industry is bright. Born in 1990, Namalomba was inspired by his father to venture into the visual arts. The revolutionary visual artist, who in 2016 unveiled a painting worth K7.5 million (US$10,500), portrays poverty and corruption currently affecting Malawi. Namalomba’s painting, which depicted clean water being poured into a cracked pot and flowing out as red blood took audiences by storm at the Haraba Arts Gallery in Blantyre city in 2016. Namalomba told the patrons then that the portrait showcased the rich resources of Malawi but how, sadly, the resources are being abused. Namalomba is a sculptor, painter, conceptual artist and interior designer. He has exhibited his artwork at Myths of Malawi, Germany in 2016, the Standard Bank Arts Exhibition at Bingu International Conference Center in 2016 and Myths of Malawi at La Galleria in Lilongwe, Malawi among other places. The artist also loves cubism, in which he distorts the human figure and develops an image from geometrical shapes such as cubes, cylinders, triangles, and circles. His cubist style is usually a narration of a situation, an emotion, or an idea.

The self-taught artist, Elson Aaron Kambalu started painting at the age of 24, but only started exhibiting at the age of 31 with La Galleria and La Caverna in Lilongwe and Blantyre respectively. Kambalu is a visual artist who owns a company called Art House Africa, and an art gallery, La Galleria, which caters as an exhibition space for more than 200 Malawian artists. Kambalu’s work has so far appeared on CNN, studio 53, the BBC, and in various media stations across the world. His gallery receives numerous visitors from around the world, most notably former US president Bill Clinton. Kambalu works toward giving artists the space to express themselves and sell their work. The multi-talented Kambalu is also a filmmaker, who in 2017 released his debut movie entitled Mlandu Wa Njinga. 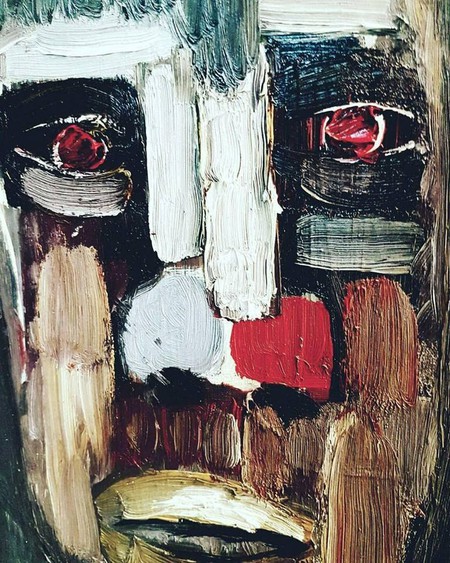 A Lecturer of Fine Art at the University of Malawi, the talented visual artist Eva Chikabadwa has been making headlines in the media both locally and internationally because of her amazing work. The 35-year-old started drawing at a young age, yet when she reached college, she studied Social Sciences majoring in Sociology. Because of her passion for fine art, Chikabadwa went back to the Chancellor College, University of Malawi where she studied Fine Art and got a job as a lecturer. Apart from transforming her imaginations into visual forms, Chikabadwa, the most celebrated female artist in Malawi, is also a makeup artist, furniture designer, and culinary artist, among others. She sells her artworks to visitors to Malawi and she also receives orders through Fine Art America. Chikabadwa had an opportunity to display her artwork with the German Malawi Art Symposium organized by Chris Heide back in 2015.

The US-based artist, Masa Lemu graduated with a distinction in Fine Arts from Chancellor College at the University of Malawi, where he became an associate professor. In 2009, he was honored as the Master of Art Savannah College of Art and Design in the US. In 2014, Malawi’s celebrated artist received a PhD in Visual Arts from the University of Stellenbosch, South Africa. Masa Lemu is another talented visual artist who has put Malawi on the map, with his work being exhibited and sold outside Malawi. The artist who is now an associate professor at the Virginia Commonwealth University learned painting and drawing from his late uncle, David Zuze. Lemu’s work which fuses imagined elements of the familiar and unfamiliar, has been reviewed in publications including Texphrastic in Houston, Texas. Recently he produced a commentary on labor and migration issues in the USA. His work has been displayed at the Houston Art Fair alongside works by other conceptual artists from Atlanta and Savannah, as well as at Evenly Measured Space at Savannah among other places. 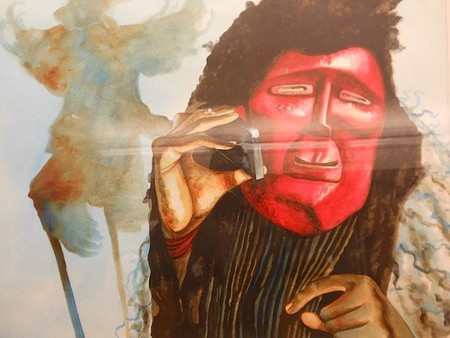 Nyangu Chodola started his career as a sign writer for tobacco processing companies in Lilongwe before becoming a full-time freelance artist. He experiments with pencil drawings and oil paintings, and was recognized as Best Artist and for Best Artwork from Art House Africa in Lilongwe, Malawi. He received a third award as the best Visual Artist from Lite of Youth Creative Organization. The artwork of Chodola has been displayed in over 50 exhibitions in Malawi, the United Kingdom, and the USA. 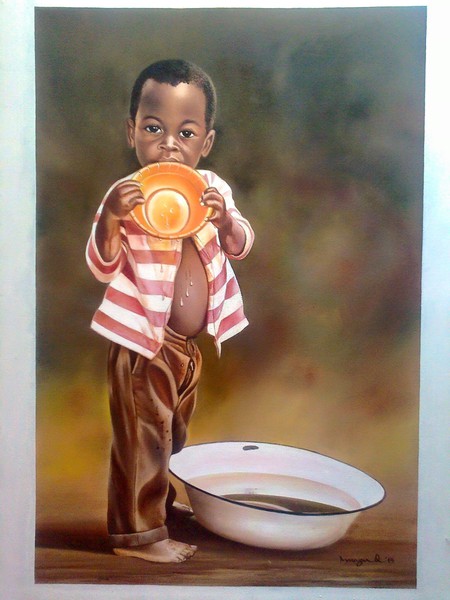 Disability is not inability, and visual artist Chrisford Chayera is a true testimony of this expression. Born without hands, Chayera has managed to overcome the stigma and segregation that many disabled people in Malawi face, especially when it comes to finding employment. Chayera uses his mouth to paint portraits, which he sells, and the artist continues to make headlines in local media as his artwork attracts the attention of both Malawians and visitors from abroad. Looking at his paintings, it’s hard to believe that they are made using such a unique skill. The artist’s work mostly depicts village life as the central theme. His work has been exhibited during the Myths of Malawi exhibitions at Haraba Arts Gallery in Blantyre, and he has visited Japan where he painted in front of a live audience.