The Most Incredible National Parks to See Madagascar’s Lemurs 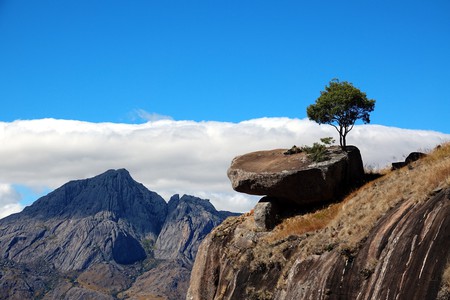 Isolated for over 150 million years, the myriad species living on the island of Madagascar evolved into a treasure chest of endemic biodiversity, including the iconic lemurs. Today, lemurs inhabit many of Madagascar’s national parks: from the dry deciduous forests in the west, over the central highlands running down the island’s spine, and into the remaining fragments of eastern rainforest. Explore these epic landscapes, and the wondrous lemurs that call them home, with this list of must-see Malagasy national parks.

In this misty rainforest, covering elevations of 500–1,500 metres, nascent clouds snag along rugged ridges, whilst streams and hot springs carve their way through the forest’s valleys. Numerous endangered lemur species can be found here, including the Milne-Edwards’ sifaka, golden and greater bamboo lemurs and black-and-white ruffed lemurs. A variety of other animals also exist in this cloud forest, such as satanic leaf-tailed geckos, elusive ground rollers and streaked tenrecs. Be sure you explore the lesser-visited trails, far away from the tourist crowds that are beginning to negatively impact the endangered lemur populations. 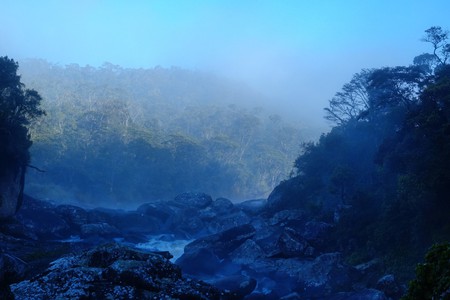 An ethereal blue dawn above one of Ranomafana's many waterfalls

Playfully dubbed as Madagascar’s very own Grand Canyon, Isalo is one of Madagascar’s most grandiose and extreme landscapes, filled with towering sandstone monoliths, squat canyons and scorching palm savannah. Despite the relentless sun, lush pockets of life exist around secret shaded oases where red-fronted lemur come to quench their thirst. High above these Edenic pools, burrowed into the steep canyon walls, are the tombs of the Bara people who daringly scale these heights to lay their dead to rest. After the day’s heat, the evening breeze provides a welcome relief as it comes rustling through the golden grasslands. 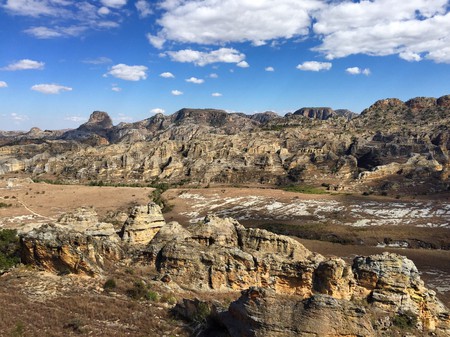 The Badlands of Isalo

As morning arrives in Andasibe, a haunting song can be heard volleying back and forth across the jungle canopy. This is one of nature’s most remarkable sounds and it belongs to the largest living lemur, the Indri. Located just 150 kilometres east of Madagascar’s capital, Antananarivo, the Analamazaotra section of the national park is one of the most easily accessible places to see the critically endangered indri (also known as the Babakoto – Ancestor of Man) and the beautiful diademed sifaka. In fact, this is where the BBC filmed indri sequences for the Sir David Attenborough-narrated Planet Earth 2. 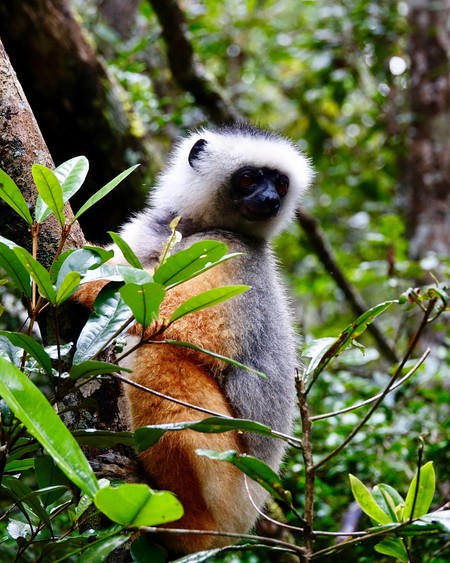 Contrary to popular belief, the famous ring-tailed lemurs of Madagascar do not actually inhabit the island’s rainforest. Instead, they can be found in fragmented distributions across Madagascar’s arid southern third, including the altitudinous granite wonderland of Andringitra. Here, the ring-tails have evolved larger bodies and denser coats than usual, enabling them to survive the cold, starlit highland nights. With Madagascar’s second highest peak, Imarivolanitra (2,658 metres), this national park is a relatively unknown paradise for hikers. Watching the rising sun slowly creep down Karambony tower, and set ablaze to the Andringitra massif, is as close to Nirvana as many will find. 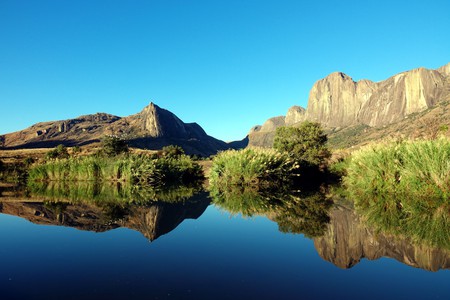 Reaching this national park is an adventure of its own. The most common route is an eight-hour drive from Morondava, which involves a seemingly endless dirt road and two croc-infested river crossings. Eventually, the tsingy (meaning, “where one cannot walk barefoot”) rises up out of Madagascar’s western bushland, a jagged labyrinth which only the ghostly Decken’s sifaka can traverse as they bound between the sharp spears of the stone forest. A small section of the tsingy can be explored via swaying Indiana Jones-style bridges and claustrophobic passages through the network of caves below the surface of this hostile bio-fortress. 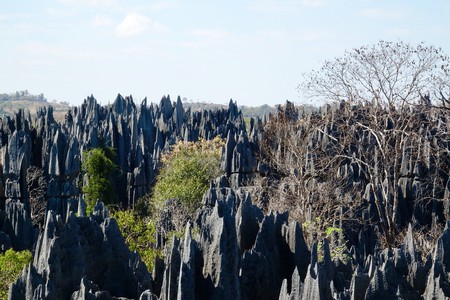 Kirindy forest lies in Madagascar’s southwest. Throughout the dry season, dead leaves crackle underfoot and thick baobabs stand as sentinels to the skeletal forest. During the wet season, the forest explodes with bright green leaves and an abundance of fascinating reptiles. Night walks are spectacular here, with twisting vines casting eerie shadows in the forest, and fossa stalking lemurs through the black night. The fork-marked lemur, with its delicate facial markings, are particularly worth staying up late for. By daylight, Verreaux’s sifaka spring through the crisp blue sky, and red-fronted brown lemurs rummage through the leaf litter. 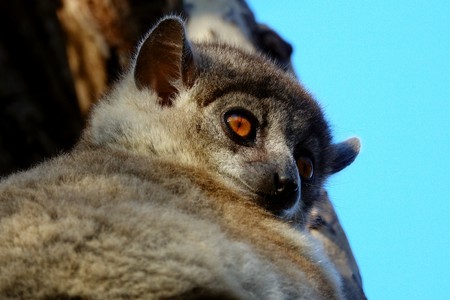 Other must-see protected areas of Madagascar

Masoala, the island’s biggest national park is where the verdant rainforest slopes all the way down to the Indian ocean. In contrast, Tsimanampetsotsa in the arid southwest features a saline lake and spiny forests.

On Cape Sainte Marie, the southernmost tip of Madagascar, visitors can see egg-shell fragments of the extinct elephant bird litter the beach and watch as humpback whales breach up and down the coast. 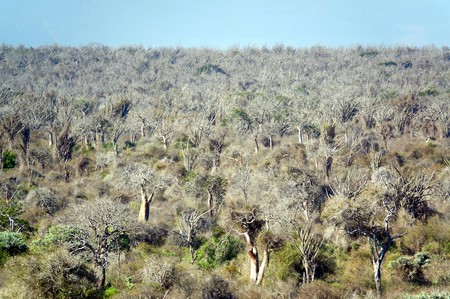