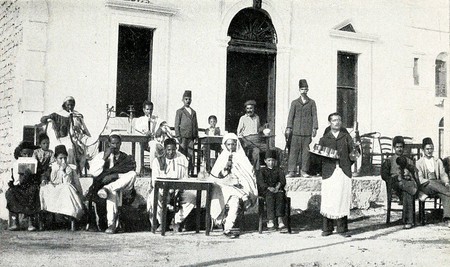 Men only at an Ottoman coffee house in Libya. |Source: “Tripolitania” by Domenico Tumiati 1911

It’s another Saturday morning and I have just entered the Il Caffè di Roma, Lavazza’s flagship café in Tripoli. I am greeted by the aroma of the Italian roast coffee being pulled by the barista. The sounds of the grinding and tamping all but drown out the high-pitched chatter of young Libyan ladies meeting for their routine weekend breakfast and gossip. Cafés in Libya used to be an exclusively male domain, but a lot has changed since the first coffee houses opened in the mid 16th century.

Coffee Trade to Italy and the First Coffee Houses

Coffee drinking in Libya is a tradition almost as old as the discovery of coffee itself. Tripoli was a major stop on the trade route from Arabia, and so coffee was enjoyed here long before the first coffee houses were established. Coffee grown in eastern Africa and Yemen was brought to Venice via Tripoli’s seaports, and as such, it’s very likely that Libyan merchants first introduced coffee to Italy.

Although it was the Arabs who first brewed and traded coffee, the Ottoman Turks established and spread the culture of the coffee house throughout the Ottoman Empire. Tripoli, being a key city within this Empire, witnessed the opening of several such houses from 1551, serving a male only clientele. Women were not forbidden from drinking coffee but instead enjoyed it in the presence of female company, and in the sanctity of their homes.

Men only at an Ottoman coffee house in Libya. | Source: “Tripolitania” by Domenico Tumiati 1911

Coffee houses were gathering points for prominent merchants and foreign consuls, much like in 17th century London or colonial New York, and were popular because alcohol consumption was forbidden under Islam. In fact, coffee houses were so important that Tripoli’s Sheikh or Elder Man (a position similar to a mayor) chose a coffee house as their office, a residence that lasted until 1870 when the municipal system was established and a separate City Hall was built.

Italian imperialist aspirations extended to Libya in 1911, taking power from the Ottoman Turks. Libya, the only Arab nation to come under Italy’s rule, was introduced to a new coffee culture. By the 1940’s thick bitter Arabic coffee (i.e. Turkish coffee) brewed in small copper pots was quickly replaced by machine pulled espressos.

As part of their expansion plans, Libya was considered Italy’s fourth shore, and an integral part of the Italian state, not just a colony. Tripoli quickly grew beyond its old walls into a modern urban center, with Italian style cafés and café bars becoming fundamental to life outside the old Ottoman city. With 37% of Tripoli’s population now Italian, the impact of their culture on Libya was huge. 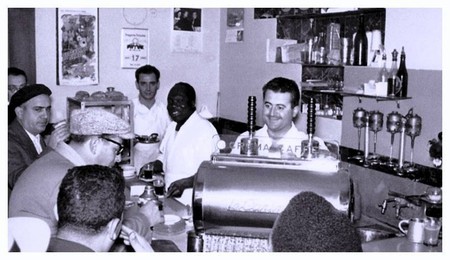 Patrons of the Caffè Triestina in Tripoli enjoying quick shots of espresso at the bar in the 1960’s. | Source: Hani Fteita and Aldo Cicero/Tumblr

Italian coffee culture, so openly adopted by the Libyan people, was to be eradicated by Gaddafi by the late 1970s. Gaddafi saw the Western ways of the “Fascist occupiers” as a threat to Libya’s national identity. In reality he was threatened by the gathering of the thinking class in cafés, fueling his political opposition. This was the same fear that the manic Ottoman Sultan Murad IV had towards the Turkish coffee houses he so violently opposed.

Gaddafi imposed bans on Western imported goods including coffee, only allowing Arabic coffee and subsided tea from Ceylon, to encourage Libyans to reject the urban Italian lifestyle and return to simpler Bedouin ways. Cafés all but disappeared. The remaining few were dingy, serving Arabic coffee and hookahs under the watchful eyes of Gaddafi henchmen, to discourage any talk of dissent. 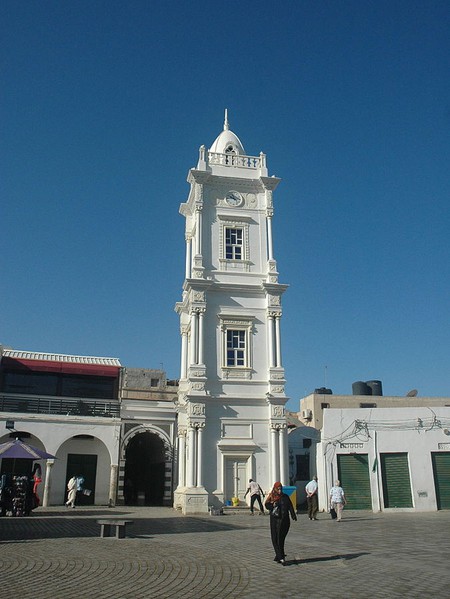 After enduring two decades of drinking bitter Arabic coffee, resourceful Libyans found a way to return to the espressos of yesteryear, without breaking any laws. Espresso pump machines began to pop up in cafés and university cafeterias, using legal super fine dark roasted Arabic coffee as a replacement for prohibited medium roasted Italian blends. The result was a bitter and grainy shot, because the coffee was too fine to be held back by the filter.

The poor quality of the coffee did nothing to deter the young Libyan patrons; the concept alone was enough to endure the taste and texture. Espresso was seen as a symbol of modernity and a step away from Gaddafi’s isolationist politics. Macchiato became the favored drink as the milk softened the bitterness of the coffee, and took on the name makyata in the local dialect. 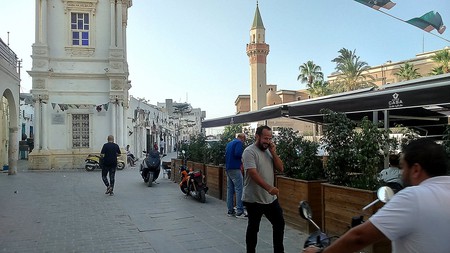 The Clock Tower Square café in the previous image after it was renovated and went under the management of Libya’s largest coffee chain Caffè Casa. | © Sarah Elmusrati

As Gaddafi began to relax his stance against the west, and to open up the Libyan economy to foreign imports and privatization, a new opportunity presented itself to local entrepreneurs. Libyan businessman Abdurrauf Buhajar took advantage of this, drawing inspiration from his childhood. “Living in Italy for so many years inspired me to create my own traditional Italian coffee shop with a modern twist,” says Buhajar, “which serves premium authentic Italian roasted coffee beans.”

In 2005, Buhajar established Caffè Casa, a coffee shop based on the Starbucks model, but brewing coffee in the traditional Italian style. The launching point was at the Clock Tower square, the sight of many historic coffee houses, in the heart of Tripoli’s Old City. Benefiting from its proximity to many tourist sites, it attracted a large mix of patrons, from foreigners, literary figures and for the first time in history, Libyan women were seen sitting openly at this café. The success of his first branch led to the rapid expansion of the brand, growing into 10 outlets within Libya. In 2015 Caffè Casa opened its first overseas shop in Istanbul, making it the first local brand to expand outside Libya’s borders. 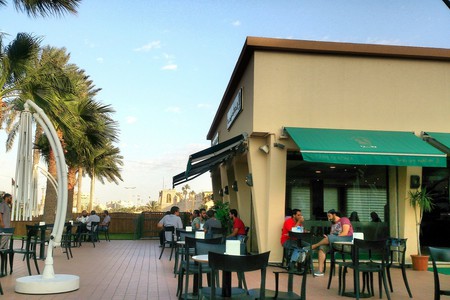 Contemporary Libyan coffee houses provide a much needed release from the political chaos left behind by the Arab Spring revolution. Despite the economic downfall, most cafés are thriving, and many more are opening, unlike the rest of the retail sector which is slowly shutting down. Cafés, with power generators and cheap wifi, provide the best escape from the rolling power cuts Tripoli has been plagued with since the fall of Gaddafi. 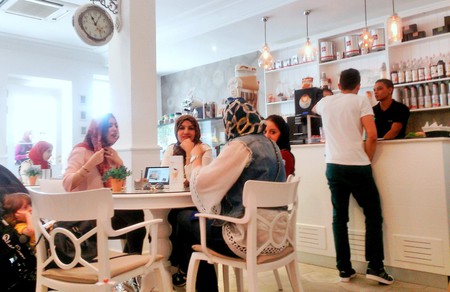 Many of Tripoli’s newest cafés are designed with women in mind. | © Sarah Elmusrati

Taking advantage of the fact that Libyan women drink coffee socially, for the experience, many new establishments are dominated by women, and are often designed with a feminine touch. Libyan women have left their homes and now make up a large part of the local workforce. Financially emancipated from their fathers and husbands, women are spending their well earned money on more expensive coffee (5-8 LYD or 4-6 USD) at many of Tripoli’s trendy cafés.

For those who are on a tighter budget, smaller cafés offer the option of cheaper Brazilian beans roasted locally, to maintain a target price of 1.5 Libyan dinars (1 USD) much like the price fixes you will find throughout Italy. Coffee at such establishments takes on a purely utilitarian function, providing a caffeine kick from sunrise, to the likes of taxi drivers and deliverymen. Malek Ali, a 22 year old Libyan barista and coffee kiosk owner boasts, “I do it because I love it, not for the money. Only we [Libyans] know how to drink coffee, and the Italians of course.”